We managed to get the remaining stakes driven on Sunday, while my mother, sister and a friend of her's from uni all kindly helped out by clearing the remaining branches. All that remains now is for L & I to fix up the three strands of wire that'll hopefully keep Horsey Houdini where we want her and herself and her field buddy (L's mare) O, can continue being turned out during the day as of Thursday November 1st when the official yard turnout ends.
After all our hard work on Sunday neither L nor I were in much state for horse riding so we decided to give her ladyship the day off - it was a much nicer day than the day before and while not warm considerably less cold and still dry with some sunshine.

Yesterday (Monday), I had planned to lunge herself in the new to me pessoa, that another yard friend N gave me on Saturday. She never used it and didn't want to see it go unused so offered it to yours truly. I needed to buy a surcingle to use it and did so Saturday evening as i was at the tack shop anyway to get another bag of feed for Fatty. I also picked myself up a new pair of gloves, identical to the ones i got recently but brown instead of black as i loved the first pair so much!
L was going to help me sort out the correct fitting of the pessoa for Kika, but was running late so i just went ahead and lunged herself in the surcingle without it - I didn't want to set it up wrong and wind up doing irreperable damage to Miss Kika!

Today (Tuesday) the vet arranged to meet me at 1pm on my lunch break from work to take a blood sample from Kika to see how the latest liver treatment was working as we are nearing the end of granules. I left my office at 12pm and didn't get back till after 3pm! Oopsy!
Thankfully I had worked overtime last week and indeed stayed late again today to make up for my prolonged absence.
Vet was held up at earlier call-out and didn't make it to me until closer to 2pm - Kika was in and tied, as evidenced in above picture. However she isn't all that patient and makes great faces! 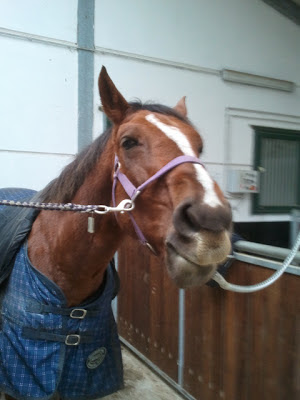 And stamps her feet like a spoiled petulant child - which i suppose she is...spoiled that is!

Vampire...of sorry the vet took the blood sample, Kika stood like a pro. I decided to corner vet to check out a rash i could feel behind K's front elbows - more so on her near side then the other. I didn't know was it a form of mud rash or was she sweating so badly under the girth that it had somehow resulted in a rash?!
Vet also wondered aloud as to whether it might be mushrooms (not sure if this is the same term in English) - but then she dismissed that one. She has given me a white cream (missed the name on the tub), isobetadene (sp?) soap to wash the rash with & isobetadene cream to apply afterwards.

Will have to see if there is any improvement from it - results from blood analysis won't be back until early next week...so stay tuned i guess!