I had a wonderful 40 minutes schooling session with Kika last night. I was able to give her more time as Nancy was being given a "day off" after her two good session under saddle Sunday & Monday.
Kika and I warmed up in walk and trot on the buckle and had a good look at everything as you know no matter how many times we have worked in this arena...this time might just have monsters lurking in the corners!


Some walk work once I gathered her up, which included circling and serpentines where I wanted correct bend and turns. We moved up to some trot work with large circles, small volts, serpentines with and without volts and of course lots of changes of rein with some walk/trot transitions just for good measure. I then worked on some more bending work with an exercise I hadn't done for a while (not since before her Christmas lameness i don't think) where we spiralled in and out larger/smaller circles on each rein to get her using herself and bending properly without over-bending and forcing me to use my outside hand and outside leg to stop her cheating and drifting out while maintaining the bend with my inside leg - tough work and far from perfect but much better then when we started using this exercise and considering we hadn't done it in what seems like ages I was very happy with the results.
Moved up to some canter work starting on a circle, then back to trot for a serpentine/circle or change of rein then back for another canter circle - I try not to do too much continuous canter so that she doesn't get all hett up and lose the run of herself - so far so good we are better able to maintain our form and even branch off our circles down the long side of the arena while not loosing our shape. Something she'd have struggled with a few months back - yay for baby steps!
I got some lovely canter work changing things up alternating trot & canter between circles and using the long side of the arena - another horse joined us shortly after we started our canter work and Kika didn't pay them a blind bit of notice she was good as gold and kept concentrated on the job at hand. 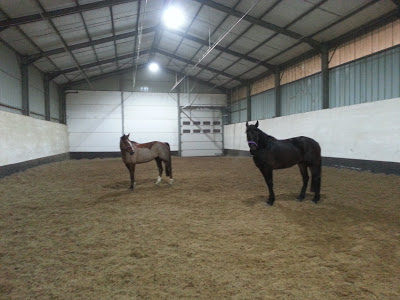 Cooled K out with a bit of walking, then had to navigate our way back to the barn she is stabled in as walkway to the arena we were using wasn't salted as so K found it quite slippy so I actually ended up walking in calf deep snow as she was beginning to frett over her feet slipping and sliding, bless her.

Let her loose in smallest arena for a bit of a roll as I collected Nancy from her stable to tie her in the grooming bay. She stood like a good girl to have her feet done (work in progress) and gave her a quick groom as she'd managed to lie in her poop in both sides...smelly sticky ponio!
She was an angel to stand tied in the cross ties as I ran around sorting the stables, carrots, hay & feed. I then turned her out with the main madam to let her stretch her legs a bit.

As with their last and only other outing together, Kika was more interested in Nancy then the other way around. 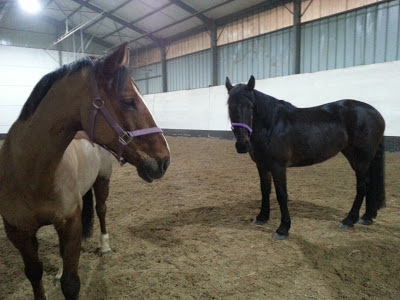 Yet when I tried to encourage them to move about a bit, Kika insisted on being in front yet played "tired" and slowed the whole show down by barely moving but not letting Nancy past - Gargh! She is such a drama queen!

Farrier is due today for another livery so hoping he can have a look at Nancy's feet to tell me if she can go with only front shoes like Kika. She only got her first set ever before leaving Ireland in late November or early December so we'll see how their holding up. Kika will have her front shoes on 6 weeks at the start of February so I don't know if N's will hold that long...We shall see what blacksmith says this evening if he comes. I haven't heard from him so hopefully he does come after work and not during as obviously then I can't be there! He comes from Belgium so snow pending will make a difference to his travel schedule also!
Other than that plans for the girls this evening is lunging, Kika in surcingle & side-reins perhaps over poles, Nancy in just the surcingle and depending on who I lunge first might give her a try over trotting poles if Kika is done first. ;-) Although with blacksmith due I could end up doing Nancy first so that she can go back to her box once feet are done...decisions - decisions!
Posted by Aoife at 10:16