Apologies in advance for lack of photos,  I haven't actually taken any of us on the beach yet! *Le Shame*
However I can share photos of the three girls getting to know S, who will continue to be their field buddy when we all get back to Lux. He was supposed to be with my girls since May 1st but had an operation to remove a growth from his leg in April,  so sadly he wasn't ready to go out with the others on the first of May.

We settled in and headed to the restaurant on the beachfront for a slap up meal. Come 6 o'clock we were tacking up to head for my first ever spin on the beach. A first for both my hirls and myself. Going off past form, I opted to take Nancy first as she hasn't been frightened of much while hacking.
The firsts kept coming, I had my first spin on the beach and my first fall from Nancy in very quick succession :-D
Thankfully it was a lovely soft landing in the sand and neither of us hurt ourselves, otherwise it would have been a long 2 weeks!
Turns out Nancy isn't a fan of the waves, lesson learned it was a bit of a steep learning curve for us both, but no one was hurt en route.  I led her along beach till she calmed down even walking into the sea with her, she really is a good trusting girl. I hoped back up we rode back to the yard. We then rode around a field for a bit till we all calmed down,  or at least that haf been the plan but my mind was playing games with me and the nerves got the better of me which then transferred to poor Nancy and we both wound ourselves into a bit of a state.

No harm no foul,  tacked Kika up afterwards and went for a quick spin in the arena. She was an angel and behaved as if she was at home. Dare I say my opinionated Madam is finally growing up into a fine young lady. 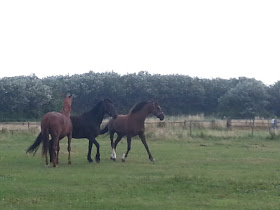 Tuesday morning dawned grey so we knew the beach would be quieter. I put on my girl pants and tacked Kika up to tackle our first beach ride ensemble. She was a bit looky, but her love of water won out and we had a great time splashing in the sea. :-D
Came back to the yard and let my two girls out together for two hours then S & O went out together for two hours while we went to do some food shopping.  When we came back L & I decided to brave the grey clouds and try Nancy again on yhe beach when ot was guaranteed to be quieter. Nothing like the threat of rain to keep seaside deserted. It was great, N is still not overly fond of the sea but through a process of elimination we know she doesn't have a problem with water or the sound of the sea/waves. It is just the foam that she takes offence to - we can work with/around that. 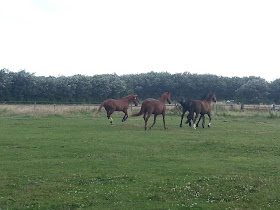 Next first to tackle was turning the four horses out together - this had been causing us some worry as Miss Kika hasn't always been the most welcoming or open to sharing, meaning O & Nancy who K perceives as 'hers'. As you can see from photos, firstly we put O & K in one sand paddock and N & S in the neighbouring paddock as N and S had travelled together in the box. Nancy wasn't exactly hostile but she wasn't welcoming S into the inner circle either. 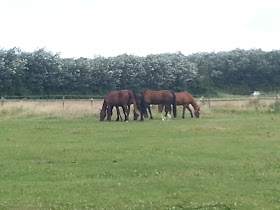 We figured what the hell, best get it over with and tossed tge 4 of them out together for our alloted 4 hour turnout window. We figured we could turn them each out one day at a time with S but the end reaction would still be whatever it would be once all 4 would be turned out together.  The new herd order would still have to be established.
We needn't have worried,  Kika has been very welcoming.  Perhaps too muvh for S' liking, she is almost like his shadow, real curious to get to know him. O hasn't really been allowed to mix with him yet despite them being olf pals, Kika is the self appointed boss of this little herd. Nancy has surprisingly been the least welcoming/accommodating to new-boy S. I reckon she's tired of being at the bottom of the herd pecking order and hoped this was her chance to have a minion below her - sorry Nanc, S has man-bits (he is gelded) and as such is simply more interesting to Aunty Kika - slag and all that she is. LOL!

What can I say the pair of them like to make a bit of a fool of me and do the opposite to what I have come to expect of them - horses eh? ;-)