The same generous friend that provided accompaniment & photos from last week also snapped some sneaky awesome shots as i rode the monsters yesterday. She caught me as i finished with Kika & then started with Nancy.
Her phone takes much better photos than mine...or maybe it's more to do with the person taking the  pictures lolz!

I started with K as Nancy spun on the walker. Kika initially surprised me by being a very good girl and not freaking out about new lighter sand that had been added to random spots in the arena (you can see it's much lighter in the background of above photo). I figured she'd freak about it & actually think she might have done had an adorable rehabbing pony not joined us in the arena for lunging.


However the different sand was deeper/softer than the "old" sand and as such kind of upset princess prissy pants and she tried to toss the toys out of the pram a couple times but we managed to keep things together somewhat. I stuck to walk/trot work as she has struggled recently with canter work under saddle and lunging, although she did work really smoothly on the lunge on Tuesday so am playing it by ear on that front for the moment and taking each day as it comes.

Our trot work was quite ropey on our collective bad rein (what came first the chicken or the egg), but we chipped away at it and with lots of transitions and changes of rein we got some nicer balanced work than i thought we would at the start of the spin.


Nancy was a little looky when she came off the walker - well looky for her lolz. A horse was being led past her field of vision and then "disappeared" to graze and she was antsy to see where they'd gone ;-)
Yet when I got on it was like she was stuck in the sand to get her walking! Admittedly she had spent some time walking on the walker already so I wasn't overly worried and after my friend left we popped straight into trot and it was suddenly like she was on springs which made me smile as i had already ridden one horse I didn't want to get into a slog ☺


I kept things short and sweet & literally only put her through her paces. Shifting gears between w/t/c & looping around the place changing reins. I also tried a bit of lateral work. She often works on it with PL, but I've always been wary of asking either girl for lateral work as I've never been taught how to do it myself & I know I sit all sorts of crooked so don't want to end up confusing everyone by not asking correctly. However I bit he bullet last night and tried to find the right buttons/cues on both girls. I won't pretend I did so correctly but there was enough of a shift at times that I could feel the back ends engaging and moving in the general direction of my haphazard cues.

All photos taken by yard friend who was riding Nancy 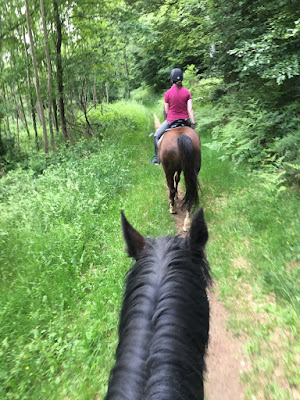 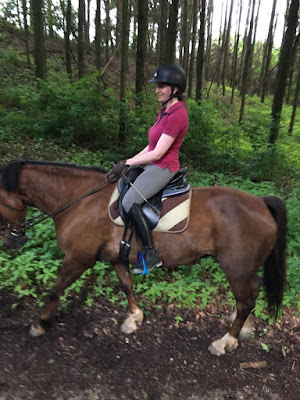 Where and why does time continuously get away from me?! It's been weeks and I've barely posted or ridden for that matter despite my hoping otherwise. There is little point in my trying to remember why I've been such a bad blogger & rider - because I've no doubt the excuses are flimsy. TG for PL keeping Nancy going 3 times a week & sometimes I hop up in between and let's be honest Kika is pretty happy with her lackadaisical lifestyle. Puddin' landed on her feet with me ;-)

Let's see...I think I had a few enjoyable spins on Nancy while PL was away for a weekend training clinic in Germany. PL & Nancy have been getting on great together, I was just glad that I didn't undo all their bonding & partnership building with my spins. We ride quite differently.

As the title and gross mispelling of the word Queen for alliteration purposes suggests this post is to praise my ould doll Kika; who has turned 12 since my last post. As per usual I had her birthday in mind in the lead up to her special day & then promptly forgot all about it on the day itself.
Such is my memory, sorry Keeks - maybe next year!
K has been an absolute legend of epic proportions considering the lack of work I have been giving her. She has had a couple sessions in the pessoa and I've ridden her in the arena myself a couple of times too. But the majority of the praise for this post comes from her epic big girl panties bad ass handling of my last minute suggestion one Saturday that PL & I take advantage of the good weather (it has been predominantly crappy in mainland Europe this month...not sure if anyone has seen what was going on in France & Germany but we were having similar wet weather) and head for an impromptu stroll in the woods. She hadn't done a tap of work since I'd lunged or ridden (see bad memory strikes again) since the weekend before yet she strode around the trails like a BOSS & BAMF leaving Nancy dawdling in her dust. The only other time she has been so good on the trails was when Beka visited last September and that was such a wonderful surprise for me that day but she had been in the woods the day before that expedition.

She truly is a champion & a completely different girl when she gets to live outside 24/7. Here's hoping I haven't jinxed the good behaviour with this post now as I make my way to the stable to climb back aboard. I did lunge her yesterday the plan had been to rig up the pessoa, but like the last time I rode her in the arena she was struggling with her canter work. Under saddle she had felt disjointed, discombobulated initially and like her 4 legs weren't communicating. However under saddle & on the lunge yesterday she did work out of of it after a few wobbly transitions. I think the osteo may be coming back to check her out as she may have tweaked something getting up funnily from lying down or rolling in the soppy field. I might go for a stroll in the woods this evening if PL has time, otherwise I'll concentrate on walk/trot work with K in an arena and then try her again on the lunge tomorrow or over the weekend to see where her legs be at.
Posted by Aoife at 18:58 6 comments: