First off I want to say a massive thank you to the brave souls that not only suffered through yesterday's word vomit but have come back for more today. Fear not, this should be much shorter!
*ahem* hopefully those are not famous last words *cough*

V's first reaction on standing beside Nancy, was "woah - she's a big girl" - she's not 18hands+ or anything, but she is a well built machine. Think tank more so than sports car, but a well put together tank...i am not saying anything negative about my precious ponykins.
You just don't really get a feel for her size until standing into her as she is deceptive when viewed from a distance. 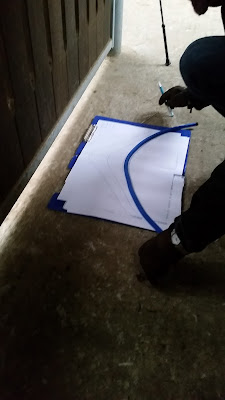 The same three measurements were taken across her back and she was taped around the middle for weight (perhaps?).
Other information was also requested like
- year of birth,
- height (here i had to guesstimate as to my shame i still have never sticked her),
- workload,
- living arrangements (field 24/7 from May to October and stabled overnight/paddock for the afternoons from November to April),
- has she had (m)any injuries
- does her weight fluctuate during the year or is she pretty stable (thankfully the latter for both)


All of this info was also taken for Kika but i forgot to mention it yesterday *blush*
My details were also taken, my height, again a guesstimate on my weight (not sure the last time i weighed myself *gulp* - so long as my clothes fit i don't tend to care) - this information was recorded on their own specific info sheets. She had a blank application form type document which she filled in for each and then used a carbon copy sheet to transfer their initial 3 back measurements so she had that information stored in two places. It was fascinating to see how she had it all organised and will have it to hand for return visits for comparison sake. I know this despite it being my first time using her services for my girls as i learned off her through a good friend who has used her for a number of years for her horse and on each visit she retakes the 3 back measurements and draws them in different coloured ink (which she dates) to see where/how the horse has changed shape between visits.
Getting Nancy's measurements took a little longer than it had taken to get Kika's as Nancy is notorious for standing with a hind leg cocked. This is the only downside to her being such a zen-creature, I had to keep tugging her tail between each measurement taken to keep her weight spread on all four feet while V skipped from one side of the horse to the other to check that the measuring device (not sure what else to call it, it was a maleable "stick" that moulded to the shape of the horse's back kind of like a playdoh but was more likely a thin soft metal rod wrapped in rubber if that makes sense*sigh* there are so many more questions coming to mind now that i wish i had asked her then) was properly taking the contours of her back.
Nancy and I went for a stroll so V could watch her walk for any irregularities in stride/movement etc - again thankfully she didn't see anything to cause concern or alarm and was as impressed as i have been that any time i have had to osteo check Nancy out she has never had to have any work done to realign her.

The first behind the withers measurement was again compared to the front of Nancy's saddle and my wallet breathed a sigh of relief when it was given the A-OK. The saddle was then sat on Nancy's back without padding to check fit/balance, i was very pleasantly surprised when she said that the fit was pretty good. We tacked up with the saddle pads i usually ride in (Ogilvy + standard saddle pad) and off we went to the arena.
She watched Nancy walk a bit in the saddle without a rider on board and then I hopped up for some walk, trot in a straight line and on some circles. V commented that Nancy looked like a pleasurable and smooth to ride (backward nod to Kika's awkwardness earlier methinks), she had also praised her kind eye when taking the measurements and saddling up as N sometimes like to turn to watch/help you while you work.
V said that she could see what i meant by my body twisting slightly to the right, but that unlike with Kika the saddle wasn't shifting on Nancy. She actually mentioned a very interesting riding aid for my twisty self, a sweater/jacket/zip-up top that was all black but had fluo lines that you could wear when riding in arenas with mirrors to see whether you are riding straight or not. She had one on had to show me, it was fascinating. I have asked her to remind me of the name when she sends me the info + bill from yesterday and will deff share the info when i have more.

We were done after less than 10minutes in the saddle, Nancy's easiest spin ever by a country mile!
V could see nothing glaringly wrong with the saddle or Nancy's way of going in it. She said that the worst thing about it was it might be a smidge tight in front, I asked did she think she could fix it by moving flocking; but she was talking a centimeter at most and said that with the Ogilvy absorbing and cushioning between the saddle and Nancy there wasn't much she could/would do.
I also had her quickly look at Kika's GP on Nancy as PL is more comfortable riding in it, she said the dressage saddle is better on N, that both saddles have very minor detractors (different ones) but that for one or two spins a week if PL wanted to use the GP she couldn't see it doing any lasting harm either to the horse's back or the saddle. I wouldn't want to run the risk of hurting N's back OR widening Princess Kika's saddle - we all know how sensitive Miss K can be about her back. I won't ride N in the GP myself as it puts me in a terrible armchair position, but so long as Nancy is happy to go in it and PL is more comfortable I see it as an ok compromise until i get the saddle fitter out again in a few months time to check and/or possible buy a new saddle then.

So despite my calling the saddle fitter due to fears of Nancy's saddle being ill fitting, it turns out Kika's needed the most work - what a surprise, Princess Superstar couldn't be outdone as the bigger drain on my finances ;-p (I kid)
In fact V said that of the two horses/saddle combinations - she would lean more towards replacing Kika's saddle before replacing Nancy's.
Colour me surprised!

I am beyond delighted at the full service the girls received and the fact that V kindly worked with me to help keep the current saddles working for us while i save up to buy new ones later. If anyone is ever looking for a saddle fitter in this catchment area i will not hesitate to highly recommend her excellent service.
Posted by Aoife at 16:51