As promised here are The Kika pre-, during & post-clipping pictures!
I can't remember if I've said how relaxed Kika is about the clipping process - but she seems to love being fawned over, so this is her idea of heaven.
Turn on the clippers & watch her lower lip droop - she is hilarious! The opposite to many a horse who tenses when the clippers start to whirr - you can actually see her breathe a sigh of relief and just doze!

Don't believe me - see for yourselves!
First some Hairy pictures taken this morning as Kika dozed while I groomed prior to L riding.
Next on the to-do list, which I didn't manage to do today is tidy up her mane again as it's after getting too long! 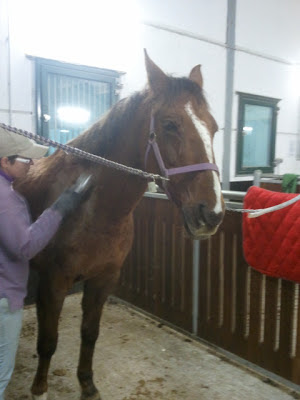 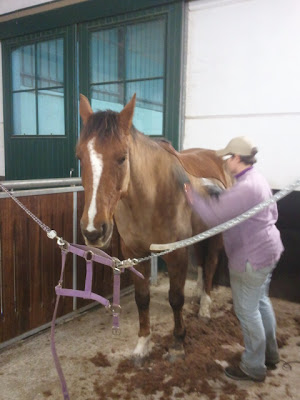 She was one hairy girl! 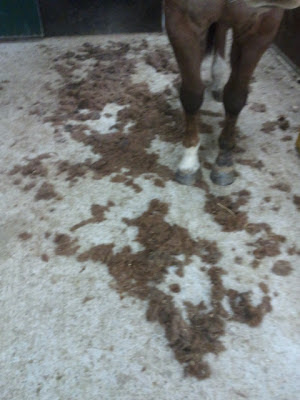 And the finished article 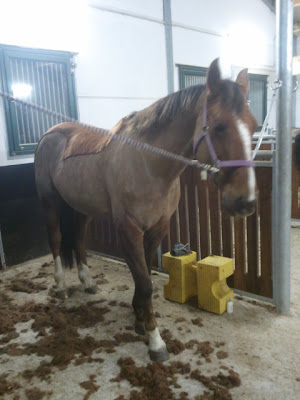 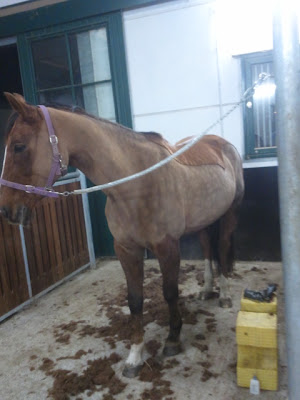 I LOVE Love love the wave effect!
It's so cool and a bit of fun - each year Kika get's a slightly different clip that is all for her, this is my fav to date!

On to other news...Today was a chock-a-block busy day, despite it being a national day off. Nothing in Lux was open - so of course all there was for us to do on this wet miserable day (witness the rain on the roof in the videos in previous post) was to be at the barn for 10 am, watch L as she rode, pop her ladyship in walker to dry off afterwards as she was drenched, sort out stable (as of yesterday all horses are back in), put Kika back into it. Run home for a quick lunch and then back at the barn for 2.30pm to go finish fencing the field.
We put L's horse, O, out as we worked as unlike my bould brat, O stays in the turnout areas she is placed - WITHOUT electricity - Word to the wise there, Kika!

I stupidly didn't buy enough plastic twist in insulators to have enough to put three on each of our posts, so we did the front of the property with three and hooked up our new 4cm wide tape to all three - then did top & bottom around the rest of the land. Unfortunately we also ran out of white tape, so couldn't finish the job today as we'd hoped - so Kika is going to be staying in until we can get all three strands of wire/tape sorted & put power around the field!
If you wonder why the extra security - check out Wednesday's Escapoligist post and any of the Wandering Wagon's or Horsey Houdini's from earlier in the year!

So things as they stand on the eve of my trip to Ireland for the weekend are that Miss Kika is going to serious bootcamp for the weekend as L participates in a training clinic/ two lessons with an external instructor who's coming to the yard for the weekend; and Horsey Houdini shall not be being turned out with O until we finish the fencing.
I've just realised it sounds like we left & are planning on leaving O in a half fenced field - this is not the case! The temporary fencing we had in place last winter is still standing and unlike Kika she doesn't attempt to go under it! So we are not leaving her out in a semi'fenced field in case that was the impression my post thus far has given off - sorry!

And one last parting shot of Kika all purplified for the night! 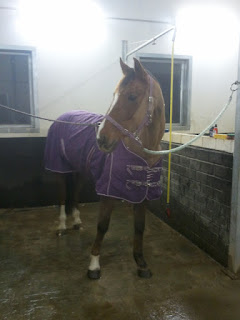