As title suggest Miss Houdini experienced her first taste of daytime fresh air since the 31st of October! We found where our electric fencing was being grounded and received 30 square bales of yummy smelling hay so he ladyship will hopefully stay where she's put!
*fingers crossed*
She spent a good five hours out there today, and shall hopefully be spending from 1pm to about 7pm out there tomorrow!

Rode yesterday on my own & my "baby" sister who is back for a week or so came with me and snapped a couple shots of us. I felt we did pretty well, but upon seeing the photos I now realise we weren't really working as I had hoped. I shall share a few choice ones as i recount the wonderful lesson I had today.
Hopefully it won't be too wordy, but in case it is - there are pictures as incentive to keep scrolling down, :p

This evening I had a lovely lesson from the Guru, L. It was my first "proper" one since L rode Kika in the Training Clinic with the outside instructor the first weekend of November. L did stop by one evening I was riding (last Tuesday I think) to give me a couple of pointers which we continued to work on today.

Namely my use of my outside hand rather than inside hand when circling and more conscious control of bend when working in general. Kika's poorer side is her left rein so I need to ride circles almost over emphasizing the bend as she's inclined to refuse to relax and let go when working in that direction, which requires a firm outside rein and lots of give & take on the inside rein to try and encourage her to release the tension and relax into the movement.
We've almost the opposite problem going the other way... 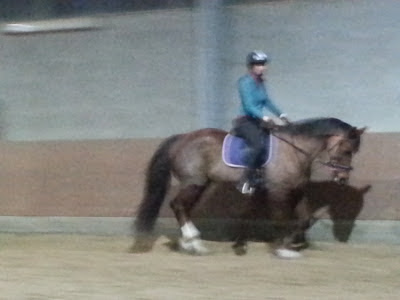 Going right handed is technically her better side, however between herself & myself we over compensate on that side and she is inclined to be over bent when circling & turning. So L continually reminds me to brake with my outside hand, keep the outside leg on to keep her on the path I decide, inside leg on for bend and a soft inside hand - which I find the hardest as I've always used my hands to turn and as such guide more with my hands then leg & seat - so my aids have classically been backwards...but the re-education process is hopefully underway!

This evening to counteract our overcompensation, L, had me ride on that rein coaxing Kika's head slightly to the outside while trying to keep her on the circle I was on - needless to say I found this quite difficult and required some straight lines to help my brain and limbs communicate better so that I could properly transfer the message to Kika. But we got there a bit in the end, following this exercise I then found it easier when circling to brake with my outside hand and not let her sneak out - but only on that rein. Our more challenging rein will take a bit more time for me to sort out - but I'm happy to celebrate any form of improvement as a victory milestone when it happens as Lord knows it could all go to pot tomorrow!
One step forward, two steps back and what not...

Speaking of steps forward and because our trot work was going so well I got the green light to canter her ladyship! We kept it simple, a circle then back to trot, then another circle of canter followed by a serpentine to change the rein from where we cantered another circle then back to trot etc.
Since the clinic, L, thought it best that I don't canter K as she finds it quite difficult and we know that when she finds things difficult or gets tired she gets stroppy & when she throws the toys out of the pram she tends (to threaten) to rear.
So L said to forget about her head positioning when cantering and to just concentrate on keeping it forward moving, leg on and soft hands to encourage her to find her own balance, release her back and stop fighting.

Happy with our canter work, we returned to trotting serpentines with small circles on each loop, after each circle we had to come back to walk across middle of arena then back to trot for circle on next loop of the serpentine. Each circle had to be done properly by me, giving & guiding with inside rein, holding outside rein, outside leg back to stop her falling through and inside leg on to get turn as inside hand not supposed to be pulling but only guiding her head. Due to earlier exercise to coax her head out on right rein, I found the small circles on that rein slightly easier now that my brain understood how to isolate my hands and keep outside rein taught. Other direction wasn't so hot as (a) it is her worse side and (b) my weaker side as it's my left hand on the outside rein - I'm sure the fact it's her worse side & my weaker side are interconnected!
Darn dominant right hand overriding my brain and not allowing messages to get through to left hand to hold, it doesn't help that Kika resists the bend to that side and it almost feels like she's locking her jaw & tensing her neck against you - but hopefully we'll get there some day soon. (PS: osteo visit is on the cards for a general check up as she hasn't been seen to since June/July - if blocages might hold a key to helping her release)
I had a bit of a light bulb moment today with circling on "good" rein so fingers crossed the "bad" rein won't be too long in catching up!

Thank you for reading this far!
Hopefully it's not too wordy - apologies for quality of the pictures and indeed my poor riding in them. Upgraded my phone yesterday after having the other one two years, so shall invariably get used to taking pics with it when i have it a bit longer!

Please keep everything crossed for my that Horsey Houdini won't strike tomorrow when I'm in work! Shall be turning them out on my lunch break and praying I don't get a phone call before I can get back in the evening to bring her in!
Posted by Aoife at 23:23