Apologies in advance that there will be no pictures of the girls to accompany this post - afraid my phone went on the blink again on Monday and has had to go back into the shop for repairs...so there won't be any new pics until i get that back. :(
Well unless i actually charge up and bring the big machine to the yard...stranger things have happened. :p

Title of the post is a bit misleading, Nancy is still a big sweatie-pie but she is starting to test the boundaries when under saddle. It started a bit on Monday where she would fight me by tossing her head about and trying to run through my hands - but she wasn't too bad about it so we worked around it. However it was a different story on Tuesday evening.
She was pretty rude to me under saddle, so we spent a considerable amount of time walking, circling and changing the rein until she stopped her messing. We then had to do the same with trot work where on her usually "good" side she was being a right nightmare setting her jaw and cocking her head to the outside trying to run though my hands. I realised that when i relaxed my hold on the reins she'd relax her head/neck but speed up which was not what i was asking for! *shake-head*
We kept at it alternating between walk and trot work, circling and changing reins until she was soft and receptive to what I was asking for. We ended up working for longer then I had originally intended, but I wasn't going to let her get away with her behaviour.

Wednesday saw her get her second bout of pessoa work and try out her new neoporene over reach boots (LINK). Size XL for her monster feet, or at least they seem like monster feet compared to Kika's pony feet *sniggers*. I bought a large pair & an XL pair, the L were too small for N and the XL a little on the large side - so we went with the XL as better a little loose then not protecting what they are supposed to protect. Luckily the L fit Kika's dainty little feet so the second pair won't go to waste, ;-)
Nancy was very good in her lunge work, better then Kika in some respects as she lunges completely off voice commands whereas Kika still very much needs the encouragement of the lunge whip to follow her around ... lazy so-&-so. Nancy's canter work on the lunge is also much improved, she was much more balanced in her canter work on Wednesday, no rushing or running when in the canter - hopefully we are making headway. :-)
We only worked a couple of minutes in walk and trot with the pessoa hooked up as she is still so young and developing that I don't want to do too much too quickly, her nice canter work was done in warming up prior to the pessoa being attached...just in case any readers might think me a smelly big meany to my poor young horse!

Kika has had a great week so far, and indeed given me no cause for complaint! The lucky sod had Monday off and was out for hours in the fresh air. I had a wonderfully relaxed spin on Tuesday evening despite there being two people lunging in the arena we were riding in and space being tight - she was good as gold.
Plan had been to also lunge her in the pessoa or side reins on Wednesday evening, but for the first time since Nancy's arrival out here I ran out of time to work both so Kika got another sneaky day off. She had been out in the turnout area for the afternoon so I didn't feel too guilty about not working her as she hadn't been locked in the stable all day she had been out to move around.

I did manage to have another spin last night on Kika as I gave Nancy the day off - I try to work her three days in a row and then give her a day off - like I did with Kika when she first arrived out here. So N spent the afternoon/evening in the turnout area with L's horse O. :D
We returned the the big bad scary main arena where the snow had been falling off the roof scaring the bejaysus out of her on Saturday - now lets remember here that Kika's memory is like an elephant when it comes to fear and that if something scared her in a certain corner last time...she will remember to give that corner an good eyeball next time she is in the vicinity.
As if that wasn't enough to contend with last night, we also had dressage markers and railings laid out around the arena in preparation for a yard show this weekend - so that had to get the old dragon blowing, slow straight-legged stepping & eyeballing for good measure when Kika entered the arena. On the upside I think they provided almost enough of a distraction for her to forget to eyeball the scary snow falling side of the arena for too long, ;-)

Again Kika was good as gold after an initial spook when i first sat up, so I cannot complain at all as i sneakily later used the markers to do slalom work between them as well as using them as more distinct guidelines for our whole arena serpentines. We worked solely in walk and trot last night, alternating between rising and sitting, circling, volt'ing, serpentining and transitions to really keep the pair of us thinking and ticking over. It was great, she was lovely soft, calm and supple - she is such a pleasure to work with lately that i can very easily overlook our weekends indiscretions over the scary snow-slides from the roof. :D

Work has been crazy this week even though it is a short week - in fact that is probably why it has been so tiring! I had 7x 70+ page documents to copy, paste & format with slight niggly changes here and there. Thankfully Mircosoft Word has the Compare & merge option and that many of the changes to the French didn't change much in the English - wahey for an uncomplicated language! :D
It was still tedious and taxing on my eyes - but all done for now and hopefully I didn't make too many boo-boos! ;-)

Half day today, so going to let Kika & O out for the afternoon and get after Nancy under saddle, hoping for some improvement on Tuesday's shenaningans - fingers crossed! :D
Also hope to have a spin of Kika this evening and if time/energy might try to meet up with some friends this evening for DVDs/take-out. As for the rest of the weekend I have no real plans, guess I'll play it by ear and ride/work the girls in some shape or form and try to catch up on some sleep as I'm feeling pretty drained!


Oh and just before I go, a colleague sent me the following picture which made me smile - just sums up the week really! :D 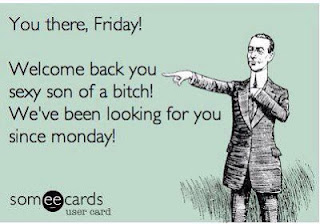 Hope everyone has a lovely weekend!
Posted by Aoife at 11:57