Only a week to go till the girls can return to 24/7 turnout and I cannot wait!
Not only are they happier (well I'm going off Kika here - although she has been so chilled this year I think she may *finally* be at one with her life) but I can have my lunch breaks to actually eat lunch & re-connect with my colleagues or meet up with friends in town etc - Actually I'll probably pile on the pounds considering I won't be doing my mad-dash across the city by bus & foot to turn the little darlings out.
Anyways, sorry, I am waffling again!

In preparation for full time turnout we tend to take the girls grazing in the weeks leading up to May 1st. Unfortunately the weather has been so cold & grass growth so poor until recently that we haven't had much opportunity. So the rush is now on to try and up the grass intake for both girls by hand-grazing so that when they do go out on grass next week they won't be sick from all the freshness.

I was so proud of Nancy on Friday evening when these pictures were taken (Kika's pics come from Saturday's grazing session) - it had been Kika's day in the turnout on; so Nancy had been inside all day and I was apprehensive as to how she'd handle grazing when she hadn't been worked or anything beforehand. In wonderful Nancy-style, she was not phased in the slightest :-D Even when other horses were ridden past and horse boxes cleaned out nearby - she just kept the head down and grazed away to her hearts content.

Saturday was a bit of a mad day, I turned O & N out about 1pm before heading into town to meet friends for lunch before Luxembourg's annual Rubber Duck Race!

For those who haven't been lucky enough to visit Lux before, you won't know that there is a valley in the middle of the city, or rather the city center is surrounded by a valley. Anyways, it's beautiful & in the middle of the valley is a little stream (called river) - and this is where they held the Rubber Duck Race - it's a charity event where you can "sponsor" the ducks and depending on where your duck finished the race you could win one of numerous prizes. I got there too late to sponsor a duck, but last year a friend won a fireplace...yeah those are the caliber of prizes! Eek! :-/

Oddly enough, considering how long my family has been in Luxembourg (23years now) - this was my first time going to the Duck Race!

Sorry - back on track with the ponios!

Had a wonderful spin on Kika Saturday evening as N was in the turnout for the afternoon, I really tried to concentrate on improving Kika's trot as the Guru had commented after jumping on Wednesday that it wasn't great again - that K was taking shorter strides. My fault for having spent too much time sitting trotting on Tuesday between our transitions, sitting trot bunches K up and shortens her striding. We had a few discussions when cantering as she took offense to passing one of the corners in the top half of the arena - but only in canter, the silly sod! So we worked at it until she passed it without jigging inside and losing her outside bend - she is still opinionated as ever and let me know in her own special way that she didn't appreciate the reminder that I had a crop in my inside hand when I asked her kindly to keep on the track I wanted, lol!

When i took her for a half hour grazing session after our spin, she was good as gold and once more exhibited her maturity by not getting herself all wound up grazing alone or when a horsebox returned from competition or when two other horses joined us to be grazed by their owners. At this time last year I could only graze K with the lunge line on as she'd take fits of joyfulness and want to play with passing horses/birds whatever moved basically, lol! 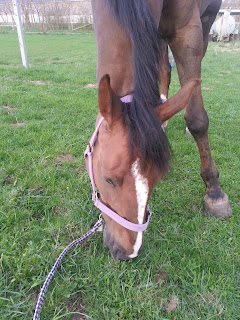 Nancy was next for a workout, I tried to put my instructions from Wednesday into practice - namely not using the whole long side of the arena at any stage, but to keep circling so as to avoid building up speed - not to be continuously trying to slow her down with my hands when she invariably did build up speed & to use my voice more.
I am struggling a bit with Nancy when I am in the saddle, as I know what I should be doing and what I shouldn't be doing - but we are having a negative effect on each other where we are being suckered into doing the things we shouldn't be doing. I think we just need a break from arena work to build up a better relationship out hacking or something - we need a change of scenery before i ruin her wonderful friendly approach to life.
Posted by Aoife at 09:29