Sorry guys, I haven't been the best at updating this week - but have been good & ridden at least one of the girls each evening.
Unfortunately I have no new pics to share since Sunday, but I do have one i forgot to include in previous post - so that'll have to be the only reward for all the waffle that is sure to follow...apologies in advance!

Monday: I had a lesson on Nancy from the Guru, it didn't go great. The mare was in a mad rush and no matter how much i spoke to her trying to slower her with my voice and not my hands she seemed determined to ignore me. We did get some nice patches of work, but if you asked me what I was doing when it was going well in the hopes that i could repeat it again - you'd find me at a loss. I hate when that happens, as if i could bottle whatever I am doing when things are going good I could replicate it and be less of a mess more often - baby steps and we'll get there I'm told. :p
Main issues appear to be twofold;
I really need to get my head around these issues!

Tuesday: Was Nancy's day in the turnout, so Kika got ridden in the evening. I had been hoping for a flat lesson on her, but it didn't happen - no biggie. :)
We worked away on our own on w/t/c, circles, figures of eight & serpentines. During which I noticed that our transitions were a little sticky, so the plan for the spin was cemented and we set to work on sharpening up our transitions while continuing our circles, changes of rein, figures of eight & serpentines to keep things from getting stale. I also did most of our trot work in sitting trot, I also tried to really work on our inside bend on the right-hand rein as she has also become a little stiff on that side (used to be her better side) but I guess after putting more work onto her previously bad side, the 'good' side got a little left out/under worked. Lots of small circles and focus from me, should help us get back on track.
Actually now that I think about it, we had a problem of over-bending slightly on that rein during the winter months...guess I solved that a little too well, woopsy, lol!

Wednesday: Was Jumping day for both girls!
Yes, you read correctly, Nancy & I had our first pop together. *dance*
Kika was first up, I rode her at the same time as another yard friend, N, we jumped together. Warmed up over the pole and cross pole @1 of each rein and from either side continuing to canter on landing. The pole then moved to the other side from the above paint re-creation and we jumped it down cantering around up over the bounce @2 which also had a pole before the first jump.
We then jumped up over one, cantered down past 4 and up through the line @3 coming back down over the oxer @4.
Our final course of the evening, as it was a lovely 19C yesterday so both riders & horses were sweating, ;-) ... was to come down through the bounce @2, over the oxer @4, up over 1 (which no longer had a ground pole in front of it), down through the line @3 and finished back up over 1 again.
I was very happy with K as we got all our turns, which although a lot less twisty then previous courses we've had to do, I could see my lines better and felt like I wasn't dropping her into the fences or setting her up wrong for them - happy days! 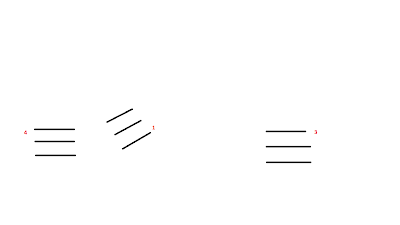 We started Nancy with the above polework from the deconstructed fences that K & I jumped. As we were still having speed issues, the first few times through the poles were a bit messy - but we both got our act together and sorted ourselves out. 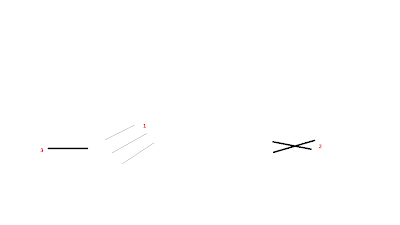 We then got a cross where fence 3 was for Kika with a  ground pole in front, the Guru had us go up over the poles at 1 (above) and come down over the pole & cross pole. No problem first time, so she raised the cross pole after another time through it and instructed me to keep Nancy cantering after the fence, even if she landed on the wrong leg - just to get her used to cantering after a fence.

The cross then became a small vertical, which L had me ride in the same way at the cross, however she told me I am not riding Kika and to not put my leg on at take-off, she said Nancy has to figure it out for herself when to take off for the fence.
First time into it she didn't take off and took the pole with her, she may have scared or possibly hurt herself a little bit as next time she ducked out to the left. back again, without the trotting pole intro this time and we got over it despite again bulging to the left before the fence - not pretty but we jumped...sort off. She again wasn't really getting off the ground and took the poles with her.
L then told me that, like Kika she isn't jumping so to put my leg on to cue her when to jump like I would Kika - but at this stage she was tired and probably a little rattled from knocking the poles, we did it once more where she did make the effort to jump but still brought the poles with her and tagged the vertical at 3 from a canter on behind which she jumped very well, so we called it a day finishing on that good note.
L hopped up to walk her around to cool off while I tidied the poles, as N & L had cleared away those that we had used for Kika so it was only fair that I do my fair share of tidying also.

I really have to figure out how to stop my reflex reaction of trying to slow her down/stop her when she starts to run on and rather than closing my hands on the reins and getting into a fight with her but letting go of the pressure and slowing her with my voice/seat.
Although the evening was very good with both girls, i can't help feeling a little deflated that I can't get a better handle on myself and help the horses out rather than hinder them - I am terrified of ruining Nancy before we even get going - the summer of hacking in the woods cannot come fast enough for me. I need to unwind outside an arena where there is no pressure on us to stay out of other people's way or feeling like people may be watching and/or judging - cos I mean come on...In a yard environment there is always some level of b!tchiness going on somewhere & while I don't ever partake in it or hear about it - I am sure it happens - it can't not when there are close to 100 horses on livery with as many characters associated with them.

Sorry as usual, this has gone on way longer than I had intended - I should run another reward contest just for whoever read this post to the end! *blushing*
Posted by Aoife at 14:07