Wow, I can't believe I've been nominated a third time for a Liebster Award. Big THANK YOU to Allie @ Woven Web Diaries. 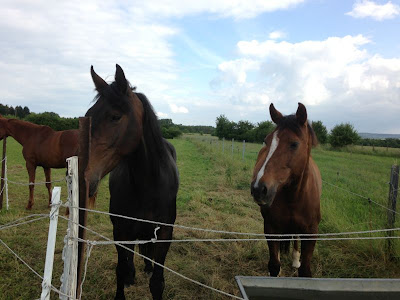 I'll answer the questions below & post some photos my sis took when we visited the girls last night and one from my hack this evening. Apologies for the pics with me in them, I didn't realise she was snapping them of me! She knows I don't particularly like having my picture taken & so likes to try & catch me unawares - hence the state of me! *blush*

1. Favorite racehorse and why? On the flat - Grey Swallow, I picked him out of the field in his first start as a 2yr old at the Galway races when I was watching them on the telly. He was a striking grey youngster who ended up running away with the race in great style, trained by the training legend that is Dermot Weld. As an aside, I caught some of the film, The Cup, last night about Dermot Weld's second Melbourne Cup victory with the gorgeous Media Puzzle...must see if I can catch the whole film sometime, but I digress...
My favourite National Hunt horse was Moscow Flyer, he was legend of a jumping horse. Unbeaten in almost every race he finished. He has gone on to be a re-trained as a very successful show horse after his retirement from the racetrack.
2. First racetrack you ever went to or wish to visit if never been? I've never been to a racetrack, however who doesn't want to go to Churchill Downs for Derby day?! Or Epsom for the Guineas, or Ascot for Royal Ascot of Aintree for the Grand National or Cheltenham for the big meet in March every year. What's the saying...Go big or go home? ;-)
3. Favorite horse real or fictional? There are so many real horses I covet, namely top level show jumpers & dressage divas - but who doesn't love them? *drool*
Who wouldn't love a spin on Damon Hill or Vallegro; Gotha or Bella Donna; Imperial Cavalier or Parklane Hawk?! 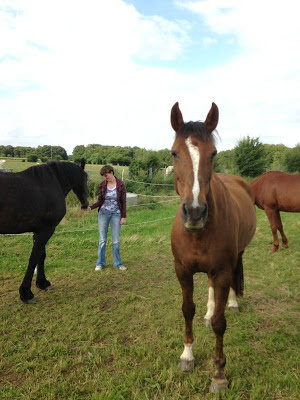 4. What color of horse do you prefer and which markings on it? I don't have a favourite colour, I like them all...and have always ben told not to judge a book by it's cover or chose a horse by it's colour. Although I will admit to having been warned off chestnut mares, and although Kika is a bit of a confused liver chestnut/bay(ish) mare - she deff has the stubborn characteristics, lol!
I wouldn't be overly fond of gray horses, but I do love a good dark steel gray or dapple gray - it's just a pity they get so light & can be prone to skin cancers, :-( However I do quite like fela-bitten grays...so again I guess i wouldn't really turn my nose up at them if they ticked all the other boxes!
I do love plenty white on my solid colours though, love me some chrome & the quirckier the better - love me a crooked blaze/stripe (a la Kika) or a big white face, I'm also a fan of socks/stockings - and although Nancy has no white I still loves her - so really I do have a preference for colour or markings, so long as what's inside the packaging suits my needs!
5. Who is your riding idol? I'm not an eventer but probably Mary King, she is just a legend.
6. Best place you've ever visited that isn't considered a major tourist attraction or is 'off the beaten path'? I really really enjoyed the Painted Mountains of Purmarmarca in Argentina. They were simply stunning! Not sure they really count as 'off the beaten path', but I hadn't heard of them until my Mother suggested we go and boy was I happy we did! 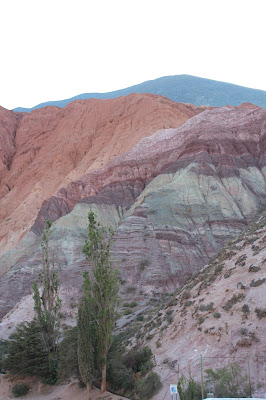 7. Favorite breakfast cereal? I'm a bit of a traditionalist and love me a bowl of Rice Krispies or Corn Flakes! In the winter a lovely bowl of my Dad's porridge is the best way to start the day, reminds me of being a kid & going to school - but rarely get it anymore lol!
8. Favorite non horse animal? Can't be cat or dog either... Well that's just mean, my favourite animal besides a horse is a dog...hmm after that. I guess I like, dolphins, orca whales &/or penguins in no particular order!
9. What are you most afraid of? Failure - but I guess that is quantifiable and means something different to different people & in any given situation.

10. Could you ever see yourself training or competing in dressage? Yes! Not necessarily to a very high level as I don't think I'll ever have the skill - but I do want to "dance" with my horses :-)
11. Three people, dead or alive, real or fictional you'd have dinner with? Hhhhmmmm, that's a tough one...I've never really thought about this, does that make me weird?! I guess off the top of my head...and it would have to be in a non-intimidating scenario, where I wouldn't be judged for my stupid questions & lack of knowledge lol - George Morris, Mary Robinson (first Irish female president & amazing woman) and Dara O'Briain or James Corden (Irish & British comedians) 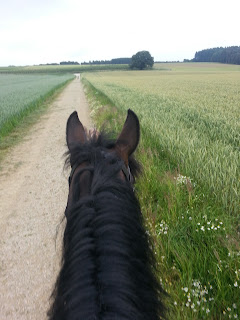 In equine news, I finally got my shiz together this evening and got out to the girls in time to go for a hack in our "new" woods. I took Nancy while, the Guru took her girl, O. We left Kika alone in the field with some carrots strewn across the ground and she didn't even look up as we rode away. The jury is out as to whether Nancy will be as easily distracted tomorrow if my sister decides against joining us for a hack....As always, N was a super star, although far from relaxed on our hack in these "new" woods, however the Guru maintained that her girl wasn't exactly relaxed either so they were probably feeding off one another. It was a gorgeous trail, we followed which led us uphill & downhill (so plenty butt building in store for the girls) across streams with lovely trotting & cantering paths alongside fab orchards where I hope to buy delicious apples from next season (1/2 for the girls 1/2 for my greedy apple-loving ass!). We were a little tight for time today as I had to be home to go to dinner with family, so don't have too many pictures. We're hoping to go out for 2-3hours tomorrow, and hopefully my sister comes with as it'll be great fun and mean I don't leave Nancy 'alone' in the field (there are 4 horses in a neighbouring field and cows all around her) - but she can be pretty vocal about being left alone/taken away from friends. Plus since moving to this new field she has exhibited her fondness of stretching her legs...so we'll have to play it by ear and see what happens...It'll also be interesting as on our hack this evening, the start of new woods hacking trail was being set up for an archery tournament/competition whereby the archers have a trail to follow and targets to hit - so we could be doing plenty mounting from the ground depending on how the girls handle the noise and action as we cross paths with them tomorrow...dun dun duuuuun. Tune in next time to find out how we get on!