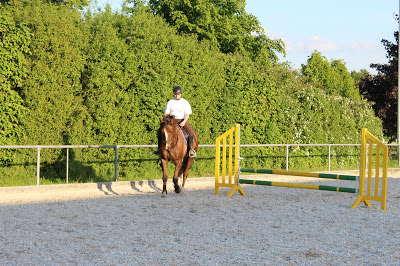 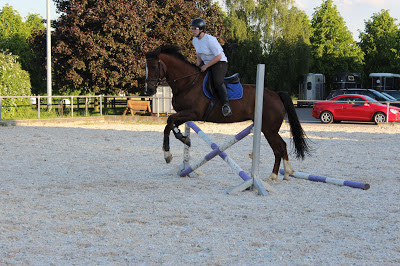 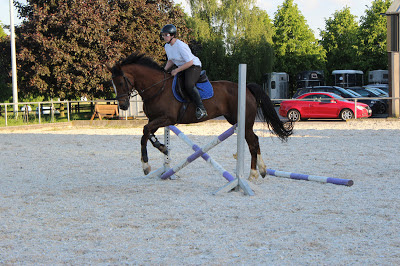 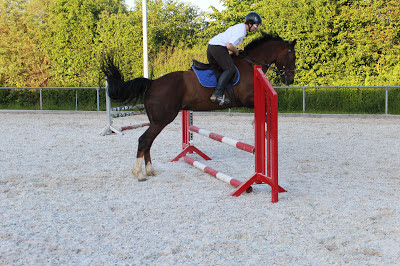 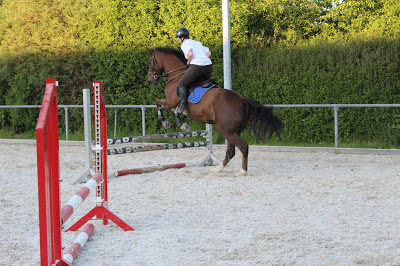 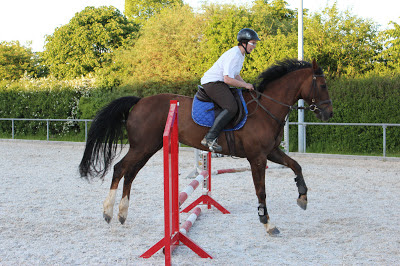 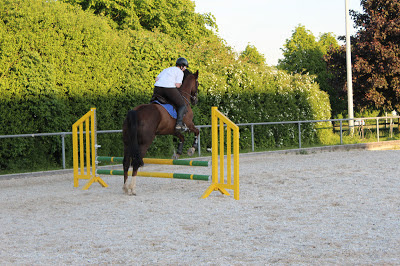 Please no comments on rider as it is not me!

Photos were taken last night of the Guru jumping Kika - so the photos were taken on Wednesday I just didn't manage to post them last night - plus I guess this typing makes this not such a wordless post...some day I might succeed in keeping silent - but don't hold your breathe!

L's mare hasn't been 100% of late and as she has the week off work, she asked if she could jump Miss Kika - to which I was only too happy to agree to as it would benefit K & makes L happy, or at least she tells me she likes riding my girls, lol! So I brought my camera and played arena helper/photographer - I tried to snap shots of the girls in the field before the others arrived, but they were more interested in following me around then letting me get any decent shots - shall share those pics tomorrow.
Nancy pulled one of her (week old) shoes on Tuesday - waiting to hear back from farrier as to when he can come back, so she is having an easy life getting stuffed with food while Kika works to try and pile back on the pounds - she is thankfully beginning to look better, I deff think the miserable weather of the previous two weeks took its toll on N. :(

Kika was a very good girl all things considered - there were of course discussions, mostly over who controlled the speed on approach, hence tail swishing on take-off ;-) But they got there in the end, L was very happy for her spin and has more things for Kika & I to work on in the future - namely my turning and stopping her correctly using my outside rein & not inside rein as I have been cheating and doing to date! I've been rumbled - watch this space to see if any improvements can be made on that front!
It was Kika's first time being ridden in the outdoor since last Autumn, I had hoped she'd behave well as she has been so good of late, I was very glad that she proved me right. *dance*

Right, sorry, wordless wednesday = FAIL from me!
Shutting up now!
Posted by Aoife at 09:00