In reply to Stephanie's comment on my last post i had accidently typed out a humongous long-winded & detailed reply with some of the intracacies of my darling girls personality differences. Sadly between cut & paste I lost all the witty repartee & hilariously funny anecdotes i was going to share with the blogosphere. Yep I am kicking myself & so will you be, poor dear readers, when you have to read this second rate drivel as i fish around in my abysmal memory bank to try and re-create the awesome that was the first attempt. *sigh*
So with that fabtastically uninviting intro i shall blather on and hope to entertain while sharing a peak into Kika & Nancy ☺

I think it is fair to say that Kika is a Diva/Queen Bee of the playground & Nancy is like a giant dog and everyone's BFF.

Field/turnout behaviour
Let's start with their personalities when greeted on turnout. They both come to meet the human, Nancy may start the amble to the fence line but as K is the boss by the time they reach the human she is invariably in the lead. As an aside herd dynamics are fascinating, there is no obvious body language cues from K like ears back or tail-swishing to get where they are going first yet inevitably she is often the first greeter of the two.
They are both equally friendly and polite with the humans but rather like a cat, if the human has nothing to give Kika (ie: no treats and she has no scratchies that need reaching) she will wander off to graze and do her own thing...a right Little Miss Independent - Kelly Clarkson would be so proud.
Nancy on the other hand is a real pocket pony and will stay with the human(s) to be fawned over & loved upon even if there are no treats in the offering. She is such a giant people pleasing sweetheart.


In saying that when I be faffing with the fencing they're personalities also come into play I'm different ways. Nancy = Little Miss Playful & Kika = Little Miss Curious. They both follow me and sniff at the stakes (plastic temporary white ones easily wielded by weak humans like me not proper wooden ones that require a tractor or stake driver to put them permanently in the ground) while i space them out before threading the tape/white-rope-wire through them. Nancy is hilarious & zig-zags her way through the spaced out stakes making her own fun. Whereas Kika becomes my shadow and stays near enough to me yet not in the way till she comes for a closer look before moving away slightly again. She keeps a beedy eye on me the whole time spying for weaknesses in my fencing that her horsey houdini brain can exploit after all my hardwork is done. Kika's version of being a pocket pony - always has self-serving needs. I honestly think she has more brains than me *blush*

Indoor personalities
Starting with their stable greetings, I can think of two videos I've shared on the blog in the past showing Nancy's typical vocal greeting. If i somehow "surprise" her and catch her lying down 9 times out of 10 she leaps up to enthusiastically greet me neighing and whoofing air through her nostrils as she rises. I have yet to be able to pet her when she's lying down as she gets up before I can fawn over her.
Kika's greeting while rarely vocal is almost more intimidating/calculating. She always knows where I am - she is always watching and if i am not doing things fast enough for her liking she will kick the door with a front leg to speed me up. She does get yelled at and stops momentarily but is not stupid and knows doing so again will get my attention and speed me up = positive & desired outcome for her...boy does she have me trained! *blush*
They are stabled side by side and usually during Kika's petulance and my yelling at her Nancy always stands there patiently waiting and watching with big chocolate puppy dog eyes.


Funnily though (or at least to my mind) their behaviour shifts when they are tied in the grooming areas. Kika is still a demanding wossface & Nancy is still the epitome of calm and elegance. Yet Kika is a better listener - go figure eh?!
Well she responds better to verbal cues. Namely 'NO' but (a) she hears it more often & (b) i have had her longer ;-)


K is also slightly better at picking up her feet for cleaning and usually holds them for herself. Sometimes she pulls her front right one from my hands - but that is the best one to stamp with...so you know priorities! K offers her feet without fuss as i run my hand down her legs, she usually lifts her foot before my hands reach her knees.
Nancy can do this but may not, it depends on her mood and how heavy she is feeling that day. Sometimes she picks up her feet for me other days I have to almost wrench them from the ground. At least she doesn't lean on me while I'm holding them as dang is she a big girl vs little ole me!! 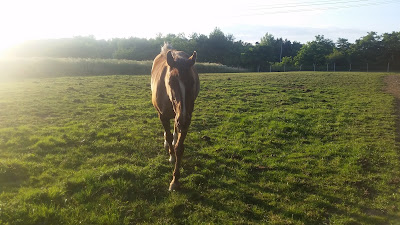 Kika is quicker to respond to a prod to move out of my space. Whereas Nancy settles in an awkward position, cocks a hind leg and grows roots. Considering how much she HATES flies landing on her she can ignore the shniz out of a poke from me to move over. I often have to shove/push her side to get a response and then she overcompensates and rather than moving one step away from the side she tends to swing her whole back end to the other side. Rarely can she stand in the middle of the grooming bay, she is almost always over to one side or the other. *giggle* 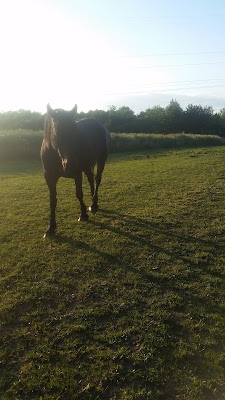 In fact Nancy tends to lean into such pressure, after ignoring the prod but before she gets a bit of a slap on the side for not reacting...no I don't beat my horses. She does not ignore me 100% of the time either. As she does the same woth the farrier/barefoot trimmer ot came up in conversation the last time that leaning into pressure like she does is a real carthorse thing to do. I mean duh right?! The horse has to lean into the harness to get the cart to move...The hitch (lolz geddit?! sorry coincidence i swear) here is that so far as I know Nancy has never been in a harness let alone pulled a cart of any description. I bought her from her breeder (my aunt) and although I haven't actually asked i have known my family to train a horse to pull so i don't know why they would have started with Nancy... So it got me thinking perhaps her lean is a throwback to her draft daddy DNA, maybe there is something genetic ingrained in her to lean into pressure like that...who knows. She is prob just being stubborn and ignoring me as an inconvenience - she has also done this to me under saddle, talk about making me feel like a fly on her back! Twice she has outright refused to walk forward when I was on her. Once in the woods way back when & once in an arena. No amount of leg of whip aid (i was not excessive or cruel) got a response from her. She can do a killer Thelwell impression when she wants *nod*


Oops this has gotten super long-winded again!!
Although I'm sure I could go on and on about their personality differences I'd best stem the verbal vomit there and hope to have shared enough pics to ease the eyesore of the preceding wall of text.
Posted by Aoife at 21:55