Breaking this into multiple posts as the saddle fitter (V) is going to email me the notes and info she took down so this is going to be my blow-by-blow as best I can remember it for Kika.

First let's backtrack a bit, I've been worried about Nancy's saddle fit and wondered if her squigglyness under tack on the right rein might be connected to poor saddle fit. I had an appointment for before Christmas but then put my back out and wasn't able to ride so i had to reschedule. This was my first time having this saddle fitter out, she's the third one I've worked with since moving to Lux with the horses. The first one was a well documented disaster that left me with an ill fitting saddle and a horse that reared. Thankfully the second one helped sort that out with a better fitting saddle and came back for check ups and sent the saddle back to Stübben headquarters twice (i think) for maintenance. He always worked without taking actual measurements, just by eye and feel - which worked fine as Miss K would 100% have let me know if something was pinching. However my good friend let me tag along when her saddle fitter (V) came with her made to measure Loxley. So I got to watch her work and was very impressed with her knowledge, the fact she not only took measurements on every visit but kept meticulous records and had many suggestions and budget accommodating ideas to fix any issues that arise. She also reflocked and fixed the custom saddle on the spot as the horse had changed shape since the order went in - colour me impressed. So i took her card with an eye to calling her out for my two when budget would allow. Tbh, it still doesn't really allow but considering N has been squiggly & I am finally (hopefully) putting K back into regular work. I figured I'd bite the bullet and have her out to check the fit of the saddles i have and hope we can stretch the lifetime of them until  budget does allow for shiney new stuffs.
Eep sorry word vomit has struck and we haven't even gotten to the fitting this morning *gulp* 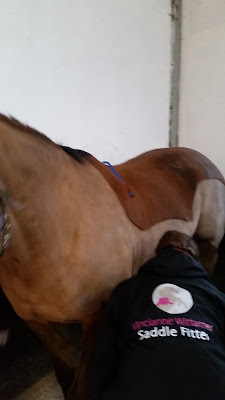 Strap in with tea/biscuits/wine/cheese - this could get even more long-winded. Sorry, but my poor memory necessitates journaling as best I can.

We started with Kika as I find it easier to ride her first, or else it's a bit like going from a truck to a porsche when I start with Nancy. Not that Nancy is heavy in the hand, but Kika is considerably more fiery & rather slighter. 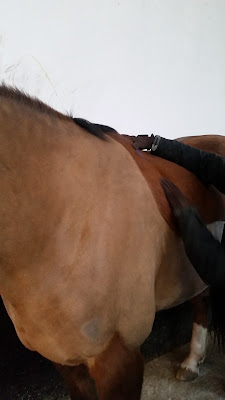 First measurements were taken in 3 parts of her back. Just behind the withers where the front of the saddle sits, mid-way & where the back of the saddle touches (roughly - i should have asked what the different measuents were for - hopefully next time I think of it). V then watched Kika walk without tack just to see how she moves and check for any irregularities - thankfully she said she could see no glaring issues.
The first behind the wither measurement was compared to the front of the saddle. First test passed, it was a-ok. Then the saddle was sat on her back, I can't remember if that was with or without saddle pad + Ogilvy *blush*
But saddle required some "pummeling" of underside panels which she was able to do at her truck. When she turned the saddle over, she noticed odd stitches near the front of the saddle which seem to have been made to flatten some of the front padding to "allow" for the saddle to be sat too far forward. She said that the master saddlers she trained with recommend that there should be three fingers space under the saddle from the end of the horse's shoulder blade to a part on the saddle (sorry don't know the name - pic below hopefully helps visualisation). 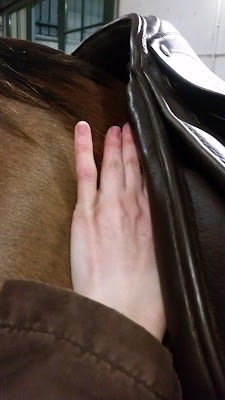 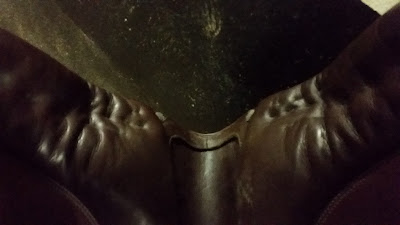 She also said to be careful of the saddle rack in my tack locker as it is compounding the padding under the saddle. She said a single bar would be better, I can't change the stables locker but i can get sponges or foam or something to make the rack softer for the saddle to sit on and stop compacting the wool.

The saddle was replaced on Kika's back with the Ogilvy and saddle pad and i was given a tutorial about how to choose/recognise a well fitting saddle pad. (She said she just put a video on her website,  which I can share a link to if there is any interest...and if it is in English...i shall have to check)

Into the arena we went, I opted for what I'd hoped would be the quieter arena based off past experience so i hopefully wouldn't be in people's way...sod/Murphys law there was a lesson going on and another rider joined part way through - oh wells, let the record show I tried! 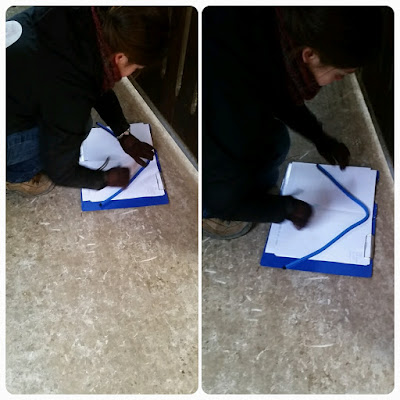 I handwalked K a bit as per our usual (aka to show the chicken that there were no monsters lurking in the corners), the saddle fitter watched her walk without a rider on board before I hopped up and we walked and trotted around a bit on each rein, straight lines and circles. She said the saddle seemed to be tilting to the right on the left rein, but oddly not on the right rein which is typically our bad side. V altered the way the girth was tied by changing from the first & third billet straps on the right side to first and second. She also tightened the elastic side of the girth way more than I've ever tightened it but saddle was still shifting to the right when we were tracking left.

She reassured me that despite our combined weaknesses it was definitely the saddle tilting and  ot something either one of us was doing. Her next suggestion was to try a different half pad that had adjustable shims. She came back with a Prolite 3 in 1, which we tried with a few different combinations of shims. We settled on two shims on the right side & one on the left. She said the saddle was no longer shifting to the side and asked if I could feel a difference. For one I never noticed the saddle swaying to the right to begin with, plus particularly when riding Kika I typically have so many other things on my mind namely keeping her attention on hand and us moving in a semblance of the right direction - perhaps an exaggeration but some days the struggle is real. Tbh, I had gotten so used to riding her wih the Ogilvy that the biggest change i could feel was having much less bulk between herself and myself in the Prolite. I'm going to have to pay closer attention to what my body feels - my own physio has said as much to me. In fact she has suggested multiple times that I need to take up yoga and/or pilates or something as i am pretty darn ignorant about isolating individual muscles and or recognising what might be pulling when. *sigh* #inattentiveproblems
I need more hours in the day to fit these suggestions in as i recognise knowing my body better and having more control will only benefit my riding in the longterm.


I was super impressed with Miss Kika. It is no secret she has her own opinion about almost everything and she always has something to say. The saddle fitter worked with us for a good two hours! O.o
K handled all the chopping and changing really well, she got a little fussy at times with the stopping and starting - more so the starting than the stopping lolz. But I cannot fault her at all, especially as this was only her third time being ridden since early November and she typically doesn't have much patience for interruptions. However she settled back into some nice trot work (with some cajoling mind) after the pad change which was prob 40-45mins into saddle time at that stage.
I honestly could not be more proud of her...now to find a winning lottery ticket!