Despite odd title I did actually have a wonderful weekend!

Things didn't go entirely to plan last week and I didn't up up riding Tuesday through Thursday between meals out with friends and work dos...I was lucky to visit herself in the field and spoil her by feeding her down there without requiring work from her first!

We did some pessoa lunging on Friday evening as it bucketed down outside, luckily I had managed to get her in before the heaven's really opened so she was relatively dry. 3/4 of an hour's grooming later with me covered in dust and hair I decided against riding and sought out the pessoa instead. She works well in it and the change from what we'd otherwise have been doing in the arena wouldn't go astray...not to mention i was being a right chicken and could lunge in small arena near grooming area whereas to get to an arena to ride in i'd have had to go out in the rain!
She went really well, L popped by and decided it was time to try a new setting on the pessoa to work different muscles, she also had me slow the trot and really get her stretching her stride as she is inclined to get short and choppy. Loads of transitions and spiralling larger and smaller circles later we called it a night and i let her loose to have a roll while i cleared all the poop out of the small arena. Not all her doing - but figured I'd clean up while waiting for herself to dry off - the Fuzzy McFuzz-Monster is back with a vengeance which makes for a sweatier horsey!

Saturday I arrived at the barn around midday with the intention of riding then cleaning our winter turnout space for the afternoon. All the lower branches have been trimmed from the trees surrounding the 'paddock', so I collected them and piled them by the entrance where someone is going to help us collect them in their trailer to dispose of them. 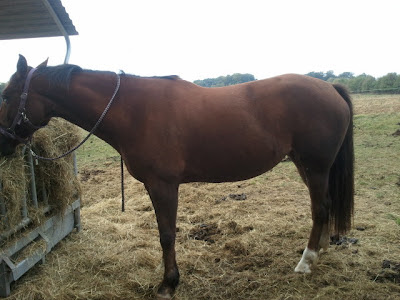 Not sure if her hairyness can be seen in the picture - but there ye go...also in evidence is the reason she is such a Fatty McFatty-Face these days. Hay-Belly!

Saturday's spin was far from ideal, but we worked through the hiccups. We were alone in the main arena and any time i felt her settle and start to do some nice work she'd find some reason to spook or act the maggot and we'd have to re-settle and go again. Quite the frustrating little madam so she was - but I stuck to my guns and we got some nice pieces of work between the messing.
Hosed the sweaty creature off and popped her in the walker dry-off, as although the day had brightened up from when the photo was taken and blue skies peaked out from between the clouds - it really wasn't warm enough at all to leave her sunbathing like last week - so she had to spin in the walker - no harm for her & her Hay-belly to keep moving in any case! ;-)

I then spent 2 hours dragging and stacking the fallen branches by the entrance to the plot of land - I did snap a picture before i went home as I really liked the light - plus I'm vain and wanted something to show for my work! :p 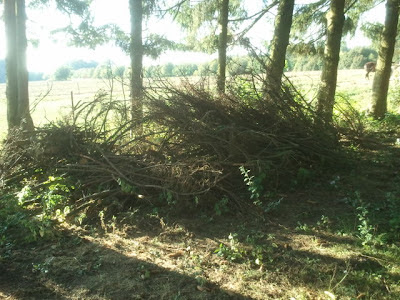 Sunday was more of the same, although our spin on Sunday was much better than the day before. Loads of transitions, walk/trot & trot/canter - which actually went quite well for a change. I actually think we managed to get some lovely canter work...although I had no one there to tell me whether what we were doing is in fact right or wrong, but it didn't feel as awful as it has done in the recent past! I also added the spiralling trotting circles into our session, alongside serpentines with and without small circles when looping, changes of rein on the diagonals and the odd figure of eight, plus circles - we're always circling! How we don't end up in a dizzy heap is beyond me!
Finished up, hosed off, walker and fed - her liver powder supplement will run out today, hoping my message gets through to vet so that we can start her on the next course of treatment asap.
I then spent another hour and half clearing the branches with L and the dog's help this time and we're almost finished! The fun next will be in dismantling the pile we've made by the entrance and loading it all up into trailers and/or the horsebox to deposit it at the recycling center.
Pity burning it isn't an option - as that would be endlessly easier!

So that was my weekend in a not so small nutshell - I'm hoping to lunge this evening and ride tomorrow before cinema outings for rest of the week as The British & Irish Film Festival is on here for the next week and a half. Hoping to take in some of the once off showings of the films while they are here!
Posted by Aoife at 14:09