The better part of Saturday was spent stake driving in an attempt to keep Horsey Houdini from escaping from her winter turnout area this year!
L & I purchased 2m stakes from a Garden Shop, they are supposed to be used for gardening and are slighter and taller than stakes typically used for fencing - but they were cheaper and as we needed so many and are only leasing the turnout area & don't own it - we can't afford to put too much money into it as we might not necessarily have permanent use of it - although obviously we hope that we will! ;)

This is the front of our turnout area where we've now "buried" the stakes by at least 40cms so that they are standing between 1m50 & 1m60.

Above is along the longside of the turnout area, neighbouring Kika's current field where we drove 7 (i think it was) stakes yesterday morning. We've two left to drive along that side, then 3 or 4 along the back of the field and then we've some young sapplings we promised the land owners we'd protect just inside the entrance so we've a couple more stakes to drive around them also. So that'll be today's job as well as seeing if we can drive the currently standing ones any further now that we're more accustomed to the mini/mallet and hammering.
Although my arms are already fairly complaining about their workout yesterday so we'll see how many stakes get re-visited today!

It was bitterly cold as we worked, temps had dropped to 2C with a windchill estimated at -3C! Such a turnaround from last weekend's 22C - our weather has been all over the place this year - such highs followed by big dips - there is no consistency or adaptation period between - crazy!
I was wrapped up warmly for our fencing, even wearing two pairs of gloves having learned from my mistake last week - so hands are no worse now then they were when i started yesterday, hahaha!
I'm disgusted at my soft lady-like hands that seem to abhor a bit of manual labour - pffft. I guess that's what office work for the last 2 and a half years gets me! ;-) 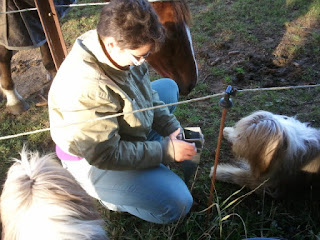 As i mentioned above, our winter turnout area borders Kika's current "summer" turnout area, so the main woman herself had to come and check out our work as we made the holes for the stakes.
I think she was sussing out our handiwork to find weaknesses for her escape routes this winter! Grrr!
Of course L's dogs were helping also!
A real team effort :-)

After a couple sandwiches I'd made for lunch, L kindly gave me a lesson.

I came to the funny, yet hard to fix, realisation that I have everything ingrained backwards/arse-ways in my brain! :-(
We worked a lot on circles & serpentines to keep K supple, soft & bending. To achieve these circles and serpentines correctly, one is supposed to keep your inside hand soft (guiding horse around), inside leg on (for the bend), outside rein is to be held to guide the horse around (letting them know continuing that way is not an option) and outside leg closed for the same purpose.
Do you think I can get such simple things right?!
Answer = Nope!
I seem to have the mirror image going on :-/
I have the nasty habit of "hauling" (for lack of another term) Kika around circles, meaning I use my inside hand and release with my outside hand. My inside leg does ask for the bend but my outside leg does nothing to steady her during the turn. My brain is so concentrated on my inside limbs that it actually feels like my outside leg just sticks out uselessly as the inside leg is on!
My brain needs serious re-programming! *Oh-the-shame!*

Most commonly repeated instructions from L yesterday:
- Heels down!
- Soften your inside hand!
- Hold with your outside rein!
- Relax your body - don't force the movement!
and then just for good measure again as the sneaky beggars won't do as they're told
- HEELS DOWN!

I wouldn't mind if I could feel progress being made with these instructions, however as she has been saying them to me from when we started working together over a year ago, well the "heels down" one in any case - the others are new'ish!
When i bemoan the fact that I can't seem to get the simple things right and that my feet are sending my brain the message that they are down - when obviously they are not - she just smiles and says not to worry that she has similar issues but that it's easier to yell at someone else to fix them - so small reassurances then.
It just annoys me though that I can't get a good enough handle on the basics - i should have a better grip on the simple things by now! :(

We intorduced Kika to the concept of rein back, by going from walk to halt. L gave me the aids to use and as I was giving them she'd give Kika a small nudge in the chest to encourage her backwards as I said "Back". We did this a couple of times then moved back onto our trot work. I'm going to practice the verbal command with pressure on chest from the ground when working with Kika to help her make the association when I'm in he saddle.
Our canter work was slightly better also, only one or two incorrect lead strike-offs, but that was my fault for not preparing her properly - I also have to watch myself in asking for canter as apparently i lean forward & 'toss' the reins at her by releasing my hands as i ask with my legs!

What have i said so far about needing to re-program my brain!

When L tells me what I am doing in the saddle it all sounds so silly & counter productive - what makes it worse is that I am not even aware I am doing it or that I have developed such bad habits!
Here's hoping it's not too late to rectify them!
Where there's a will there's a way right?! I can't be too much of a lost cause just yet...right?! 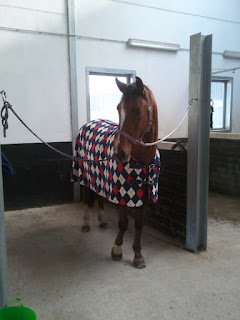 One last little photo for good measure of her ladyship in her knight-like cooler demanding her feed after she worked so well - pity her rider is an uncoordinated muppet!
L is going to ride this afternoon in preparation for their training clinic next weekend. She's asked me to video it for her on her camera so she can have a before & during the clinic videos for comparison - so i'm not sure if i'll be able to nab any pictures of Kika working with a good rider - but we'll see!
As i said above, where there's a will there's a way! ;)
Posted by Aoife at 09:20