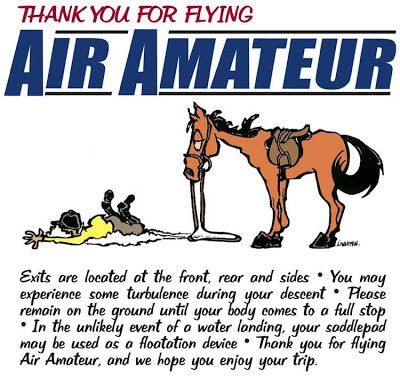 Someone at the yard printed the above and stuck it up on one of the noticeboards - i thought it was priceless and had to google it to share here!

On to a proper updated from myself and the no longer hairy Kika.

First off, apologies for the radio silence since my update overload - I think I mentioned that I was going to be away in Ireland for a long weekend and then when I got back I was unfortunately ill and off work Thursday & Friday - so spent the end of the week & Saturday vegging in bed with the laptop catching up on all my tv shows.
Thanks so much to "The Guru", L, for keeping Kika going for me!

Speaking of the Guru, she did ride Kika in the Stage (French for training clinic with outside trainer which took place at our yard). She said she was much better on the Sunday then she had been on the Friday, but she hastened to add that she was not bad either day - she just better understanding of what was being asked of her by the Sunday session. As I was away, L also rode her on Monday for me and as she was excited to continuing working on the lessons they tackled at the clinic.
Consensus going forward is that she is quite lazy, yet very clever - a dangerous combination according to the trainer.
As not only does she not particularly want to work but she has the brains to think of ways around it!

"Tell me something I don't know" I thought, but it is good to hear similar verdicts from outsiders who don't know her story and haven't seen the sack of spuds I am when riding!

L got her answers and exercises to work Miss Kika with to help her open up her back and stop fighting us, this also includes what seems kind of strict/severe shortening & re-introduction of a martingale to ridden work to stop her throwing up her head/neck - hollowing her back - and fighting us, thereby frightening me with her carry on (aka rearing or attempts thereof). It has also been put forward that I don't ride canter work until we have a more compliant horse under me or until I feel confident enough in our ridden work to not tense/freeze/stiffen get scared if she does start making shapes to throw a wobbler.
I will say I am a braver rider when there is an experienced person on the ground to keep me out of my head (& ring an ambulance should worse come to worse :p). As such I am more than happy to tackle such issues should the arise only within the confines of a lesson scenario until Kika & I are more confident in our work.

All in all it was yesterday (Sunday) before I got myself into the saddle for a spin with the shorter martingale - it is going to take some getting used to - but can only better my riding, I think. As I realise now how much i have been over-reliant on my hands for steering and now must use my legs more - positive outcomes only!

In keeping with trying to encourage Kika to release her back when working by trying to stop her throwing her head up; I have traded lunging in the pessoa for now with lunging in surcingle and sidereins - loose until she develops the right muscles, stops fighting and starts using herself more freely across her back. In saying this, her work in the pessoa was always less argumentative then when under saddle - but I'll do as I'm told and hopefully see an improvement in our work in the coming weeks.
I haven't always been the biggest fan of side-reins, but understand that when used correctly all training aids have merit. I do want to stress that I don't undertake changes in my work with Kika lightly and trust the people around me to guide us in the right direction for progression.

All going well I'm hoping for a flat lesson tomorrow evening and we'll see where we go from there!
Posted by Aoife at 23:25