Bad news Kika fans!
The main woman has done herself a mischief and is lame. I rode on Monday evening, she was very well behaved but a little "off", not really lame but not 100% and she worked out of her stiffness. So i didn't think too much of it and put it down to spending most of her days in the stable at the moment (we still haven't had a chance to sort out the fencing!)

Tuesday I had planned to lunge her, went to the yard at lunch time as a friend had a lesson so popped Kika on the walker while I turned O out and sorted out K's stable. I checked her legs before and after her walker experience and felt no swelling or heat in them.

I came back in the evening and popped her back on the walker while I again sorted out her stable for the night & to warm her up before the lunge equipment and side reins came out. I again checked her legs and even decided to pop on her Eskadron Tendon & Fetlock boots - which i don't always think of (shame on me - I know!)

She warmed up nicely with the side reins on the loosest setting, so I tightened them up a couple of wholes, she was working well if a bit sticky the odd time. I figured she'd loosen out of it like she had done the previous evening under saddle. We worked up to a bit of canter as she was flowing nicely in her trot and worked on our transitions and larger & smaller circles. She worked away happy out and then from nothing (so far as I could tell) had a little freak out in the corner - whether something spooked her or she just got a notion...I couldn't say. But she took off at a bit of speed with a buck/leap/fart thing thrown in for good measure.
When i calmed her down and sent her on her way again she was very much no longer right! :(

Called L & N (another yard friend) who were hanging around elsewhere for a second opinion - just to be sure to be sure...I'm still not great at trusting myself or gutt instinct. They both agreed that she wasn't right, we took off the boots and had a feel of her legs - was hard to tell at first as even though her legs aren't supposed to heat under the boots, they kind of do a little bit...but we did find some heat in her two front legs. We decided cold hosing was the best bet and a re-evaluation in the morning. L had today off work and said she could check on her this morning. After hosing last night, her right foreleg was after heating and was swollen around the fetlock. I cold hosed both front legs for 10-15mins each and popped her back in her stable, there was nothing else I could do last night.

Got word from L this morning that she found the leg more swollen after the night in the stable and advised getting the vet out before the holiday period starts at the weekend - plus to be honest we were both a little wary of the tendons, so better to be safe then sorry on that front where waiting would not be the best thing at all.

Thankfully vet could come out this evening after I finished work, first thing she said is that her feet are after getting very small in front. I had been worries about this in the summer and had raised a query about them with her before. The strange thing is Kika is actually coming up on a pairing, so if anything they should have been longer but as Miss Kika is inclined to stamp/scrape her front feet off the floor at feeding time - to scoop her hay around the stable and just generally make a mess of her straw bed - hence the multiple re-bedding I have to do a day!
The vet has prescribed 2x 10minutes or 1x20minute hand walking every day on hard ground, cold hosing and clay to keep cool. She gave her an injection, and left me with powder satchels for feed (to be given separately to liver supplement) and Hippopolazone (anti-inflamatory) of which I am to give her 15mls syringed into her mouth.
The end result may be that front shoes might have to be put back on...but we'll see what happens on that front.

This is just a theory that I am mulling over here, she has actually been stamping/scraping the ground less of late when tied up for grooming/tacking - so I am not sure that is the sole reason to blame here. L has very kindly been leading Kika out whens he hacks her mare O in the woods - the track they take has a fair amount of walking on tarmac - i think this may have had a more telling effect on the wear of Kika's hooves, although obviously her stamping at feeding time/when hay eating - does not help!
I am not laying the blame anywhere, as L was very selfless and kind in allowing K to tag along on their hacks, it also meant she got out of the yard and didn't have to spend so much time in the walker - plus the beneficial effect of her strolls in the woods with L were very much in evidence during our hack on Sunday!

It is just a pity that this should happen at all, but particularly heading into Christmas break when we had been getting on so well together lately - oh well...I guess a bit of a break is deserved :-p

Vet has said to see how things stand on Tuesday and go from there perhaps working some trot work back in depending on how swelling/heat /lameness are affected by drugs/break/hand-walking.

One last parting picture as a thank you for reading this far...One of my fav shots of K & O - unfortunately slightly blurry, but i still love it! 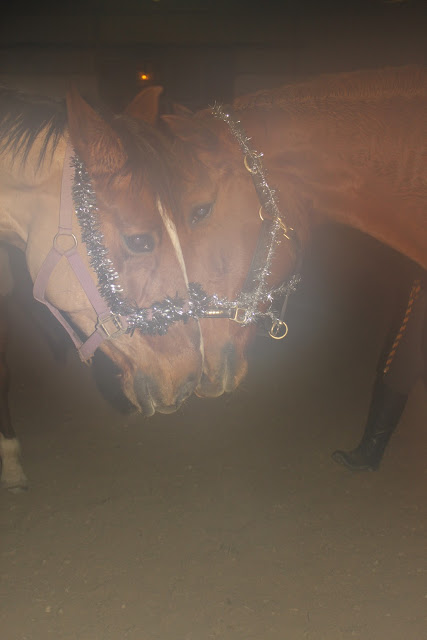