We've had an absolutely wonderful weekend so far!

Friday started well as I decided to give Miss Kika the evening off, so i brought my camera and some Christmas decorations to the barn to play pony dress-up with her!


The wind & rain were howling outside and she wasn't very happy standing tied, so I decided to let her loose to burn off some steam - as she spends most of the day in her stable now seeing as we still haven't managed to sort out the fencing around the hay.

Burn off some steam she did as you'll see from the following pictures as she got to stretch her legs with her good friend, L's horse, O. 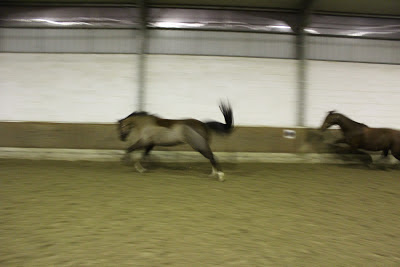 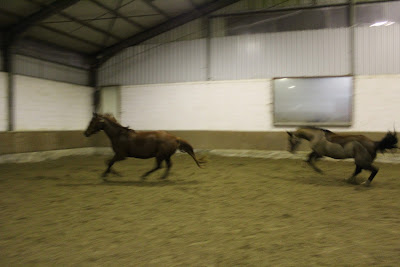 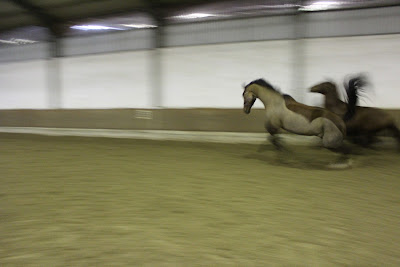 We actually had to separate them after this mad escapade while I let Kika blow off some on her own for a bit as O is still recovering from sore limbs.
They were a right pair of mad muppets hairing around like loopers. L had had them out in the woods that morning and she said she had loose schooled them together not that long ago and really had to get after them to get any sort of movement out of them. I guess as Abba say "there was something in the air that night" on Friday!
We then got the Christmas gear back out to play with the pair of them now that they had blown off some steam, I might share a teaser pic or two, but I think I'll save the majority for a Christmas Themed post closer to the time. :-p
Mean aren't I?

Yesterday was a busy day for me, I had a class in town from 10am to 12pm and then a group of 13 of us, mixture of work, school & uni friends went on a chocolate making course from 1pm to 3.30pm - actually finished closer to 4. ;)
Gosh we were like children and had a blast!
L had offered to ride Miss Kika for me - who am I to turn down such an offer?! I love that she enjoys riding my horse as she can teach her so much more effectively than I can :p They had had a great spin together on Thursday evening in a busy arena. I was at my office Christmas Party & L had once again graciously offered to put Kika through her paces, she told me that there were 6 others in the ring at the same time as them and that Kika was an angel. She didn't put a foot wrong despite other riders getting a little close for comfort & scary dogs showing up in the doorway out of the night - this time last year those kind of interruptions would have been great excuses for Miss Kika to throw a wobbly and refuse to do any more work.
She is really after turning inside out and is a joy to work with at the moment - which is really saying something considering the hissy fits she could throw due to excess energy from no turnout!

About 6pm Saturday evening I text L to ask her did she want me to bring O in for her as I was going to head up to the yard about 7 to sort out Kika's stable and settle her down for the night. Unfortunately when she got back to me she said that she wasn't feeling great and apologised that she hadn't managed to do anything with Kika yet. I told her not to worry and offered to sort O out for her while encouraging her to rest up and feel better asap.
Still in my "normal" clothes I headed up to the yard intending to lunge her fine self in side reins as I was feeling pretty sleepy myself and hadn't been planning on riding in any case.
I got to the yard with the wind and rain hammering off the roofs and tossed Kika in the walker while I sorted out her stable for the night. The place was deserted, I think there was one young girl with her boyfriend looking after her two horses and few other bodies around. It was just so peaceful that I don't know what came over me, but I took a notion and decided to have a spin anyway - luckily I keep my boots & gaiters in my tack locker at the yard and was wearing a pair of skinny stretchy jeans that wouldn't damage my tack. :p

I hopped up and had a wonderful spin, Kika was just on and we worked really well together. Cantering alone for the first time unsupervised in quite a while! We were just clicking!
I hadn't tied her flash tight enough and she was managing to snake her tongue around the bit, so i hopped off to tighten it then popped back up and we went straight back to work without an iota of fuss - this in itself is a testament to how far we have come!
Well that and the fact that this time last year it would probably have never crossed my mind to just change my plans last minute and hop up for a spin when there were so few people about!

In case you haven't guessed, this is morphing into an "I Love My Pony" post ;)

So we come to today, I had told L last night that if she was still feeling unwell not to worry that I would turn O out this morning. My phone buzzed shortly after 10 to say that she was feeling much better and asked did I fancy going for a hack in the woods with her. I had only been thinking yesterday how nice it'd be to get out for a hack again if I could - so after a moments hesitation, as I was comfy in bed when the text came through, I mentally scolded myself and agreed. By the time I was sorted and arrived at the yard L had very kindly started tacking Miss Kika up for me as she had to be home for dinner with her folks at 1pm.
Despite being slightly apprehensive about riding out in the woods without allowing K to blow off some steam or spin in the walker first, I put on my big girl pants and just went for it - it was brilliant!
Kika has been going for regular strolls in the woods with L being led while she rides her own horse, she has become much more zen for the continued exposure. She relaxed much quicker then she would previously have done after having had such a break from hacking, so much so that the majority of our hack was spent riding at the buckle as K stretched out nose to the ground really opening up her back!
Something I am completely ecstatic about as we have such issues getting her to release her back normally. So to say I was over the moon is an understatement!

We had one woopsy moment, where Kika walked over a fallen branch with leaves etc on it which tickled her belly and she gave herself an all merciful fright and leap/bucked over it. Another testament to her zen status of mind and much happier place mentally she settled right back down after the hiccup and continued mosying along with her nose inches from the ground!
HAPPY DAYS!


We continued our hack without any issues, incorporated some trot where Kika was happy to listen to me and work at the pace I was asking rather than just aimlessly following behind O & L. We had a sneaky canter also, which while less "workman-like" was nonetheless controlled and well behaved despite passing all the normally terrifying tree trunks that had been cut.

So that's my weekend so far summed up in a not-so-small nutshell! Will be heading back up later sort out her stable and bed her down for the night - but cannot express how happy I am with how everything is going so far this winter.
Fingers crossed it lasts & that I haven't just jinxed us!
Posted by Aoife at 15:43