Where does the time go?! 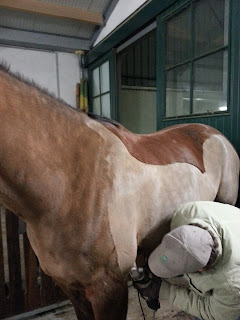 Title question fits in well with above photo - Miss Kika got clipped again Monday last week, as you can see from photo she had a sizeable amount of re-growth! I think this is the first time in the 5 (going on 6) years I have owned her that we have had to clip her a second time!

What have we been up to since my last update at the end of November - honestly not a whole pile! *shame faced*
I rode last Tuesday and for about 20minutes on the spur of the moment on Friday as the osteo came that afternoon and I knew Miss Kika would get 2 days to recuperate after her manipulation. Both days under saddle she was very good, lots of walk trot transitions, circles and serpentines etc - the usual! Although we still need to do a lot of work on our downward transitions as I mustn't forget to hold her together better!

Osteo found that vertebrae 1 & 3 were out behind her ears, another was out behind her withers under where the saddle would sit and a final one out in her lower back where her hindquarters start. I mentioned about her sweating more on her right side then her left when worked to which the osteo said was to be expected due to how the upper vertebrae were out as Kika was having to work harder on that side.

I had Friday off work and luckily i did as the following photos were all taken that day - talk about snow. :-) 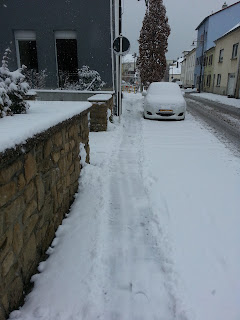 Evidence as to why I didn't manage to sort out fencing around hay to be able to let Kika back out - it snowed on and off all weekend!


The above is one of the girls who works at the stable's car - the snow piled on and around it is what fell from the time she arrived between 7 - 8 am and when I let O out about 12pm!

As you can see from snow pictures I didn't manage to sort out the fencing around the hay so Kika is still under house arrest and I'm not allowing her out - but to be honest she doesn't seem too upset! Following the osteo visit she had a couple spins in the walker over the weekend and being the nice owner I am i decided to let her run free in an arena Sunday evening as I don't like relying on the walker as I don't want her to get sour about going in there!
The silly sod was feeling too good in herself and had a couple of happy bucks and tossing herself in the air - however she wasn't properly concentrating and didn't keep track of where her legs were going and fell over herself. Why she always waits to do this AFTER the osteo's visit - thankfully she didn't seem to hurt herself as I kept her moving when she stood up while she was warm to see if she took any lame steps.
The real test was going to be Monday evening when I scrapped plans to ride in favour of lunging considering her escapades as I'd be better able to see how she was moving from the ground.
All went well, she even had enough pep in her step to start being silly on the lunge 25minutes into the session just as I was thinking about winding down!
Talk about being her own worst enemy!

For the final bit of this catch up post, I rode last night in the main arena. Kika was a bit tense at first, but then L arrived and got the pair of us concentrating on what she was telling us...namely getting me to rise slower to slow her down and try to get Kika to relax thereby releasing her back. We did get there quite quickly, but I doubt I could've gotten there on my own without the constant tuition from the sidelines. Maybe some day,

We did get some canter work done, between Kika and myself it is far from comfortable at the moment - but if we could both relax into the movement and release our backs we'd be doing a lot better. L keeps telling me to sit into the saddle, make myself longer, leg on, softer hands...it's exhausting trying to keep on top of everything - but on the upside all the instruction keeps me out of my head!

Latest bad habit to add to the ever growing list is my lower leg creeping forward, particularly the outside leg more so than the inside leg - although that one is by no means perfect!

And to really concentrate on squeezing with my calves, not heels and only when I am sitting in the saddle - apparently I have mastered a weird bad habit of managing to squeeze while rising trot as opposed to sitting - how or why I started doing this I have no idea, but I didn't even realise I am doing it so correcting it will be fun.

An ever growing list of things to correct! Plan is to hopefully pop a couple poles this evening - but as it's so cold I may have to scupper that plan...will see what l says when we get there later. As I wouldn't blame her if she doesn't fancy sticking around to help

Lots to work on from last nights lesson, but all in all it was very good and i was very happy afterwards!

It was cold though yesterday and colder today! :-(
Radio this morning said we can expect highs of -2C today, lows of -8C forecast. However today I think is to be the coldest day, sounds like it'll warm up and rain for the weekend!
Happy days! *roll eyes*