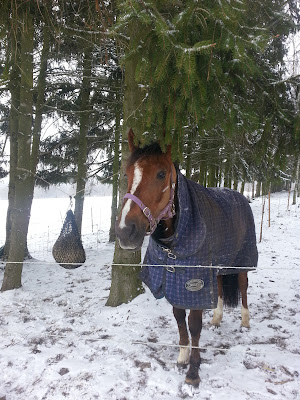 Muhammad Ali may have floated like a butterfly & stung like a bee, so Miss Kika has been attempting to mimick him and uses the hay nets in the field as punching bags. I haven't seen this myself, but other yard friends have witnessed her in action - and reported back...never a dull moment with her, ;-)

Under saddle has been a mixed bag with Kika this long weekend (yay for having had Monday off work!), Thursday and Friday were very good. We worked for a good 45 minutes to an hour on Friday evening with a friend and 4 mad Arabs in an arena that in all honesty was too small for 6 animals to work comfortably together. She was an angel, didn't put a toe out of line and did everything I asked of her in a smooth & calm manner, not getting flustered by having to stop or change direction quickly if someone else happened across our path.

To say I finished with a massive smile on my face would be putting it mildly, I was overjoyed with her!
Saturday and Sunday were a different kettle of fish. Unfortunately for us, the snow started to melt on Saturday and was sliding off the roof as we attempted to work - snow falling off the roof sounds like a horse eating avalanche to Kika even though I had the radio on loud to try and drown out the noise. Sadly, luck was not with us and any time we went down one long side of the arena the snow happened to time it's fall to coincide with our passing that side!
Now I am not one bit upset with her as it was loud and scary sounding, especially as she couldn't see where the noise was coming from - between the mini avalanches she worked like a dream, but they really disrupted her concentration and after 20minutes her poor brain was fried & she was on edge. So when she calmed back down we called it quits for Saturday, I wasn't unhappy with her at all as she had been so good the day before and wasn't bold on Saturday, just on edge and not relaxed.
So i pulled the plug on my plans to ride Nancy as I was alone at the yard and didn't know how she would react to the snow falling, so figured I'd save my neck and chance such adventures on a day when there might be someone around to call for medical help if necessary, ;-)

Sunday was Rugby day, England vs Ireland in Dublin, so decided to split the horses either side of the game, starting with Kika in the morning and the plan was to do Nancy after the game who was spending the day in the turnout area. Rode Kika in "our" arena, my favourite and out of the way of the general public. Again she wasn't bad, but she was on edge for some reason and just not herself. Or at least not the version of herself I have gotten used to in recent weeks, so we tipped away at our work but she never really let go or relaxed while in the arena. She did everything asked of her, but just felt on edge and as if any sound might set her off, so we cooled out and then I gave her a good grooming session which you'll see from photos above and below she's shedding like mad!
Now bear in mind she only has hair on her head, legs & 3/4 of her back as she was clipped for the winter! 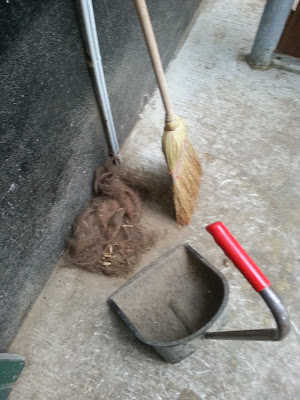 I can't imagine how much hair she'd be loosing if we hadn't clipped her...in fact I can safely say that if she hadn't been clipped we wouldn't have been able to keep her in work over winter as she gets so hairy she'd have only been able to do 10minutes work before being drowned. Although Nancy wasn't clipped she isn't shedding as badly (as yet) but also doesn't seem to have as thick a coat as the other cold creature! Although Nancy does get quite sweaty when worked so takes some time to dry, hence why I must remember to not do too much in the evenings or I'll be forever trying to dry her off!


After the weird weekend's riding with Kika I decided to give her yesterday off to refresh her ideas outside for the day so she could let her hair down and just be a horse for a while - she & O went out about 11 and L was going to bring them in about 8pm - so they had a great day outside. Or at least it would appear that Kika did, L noticed when she passed the field to walk her dogs that Kika having finished scoffing the hay we'd given them was artfully stretching over the wires and stealing the neighbours hay...without touching the fence - sneaky sod! So we're going to have to move our fencing to keep her away from accessing their hay now as well as ours - she really is an artful dodger!
Again never a dull moment with Miss Kika!

Monday was All about Nancy Day. :-)
I finally managed to get back in the saddle after some lunging and she was very good, we got plenty walk/trot work done and some canter to keep things ticking over. Hope to have a helping hand this evening so that I don't spend too much time working her on my own so that we don't start with too many bad habits. Mounting is proving a stickler for her at the moment, she no longer seems fond of standing alongside the mounting block to allow me mount - so baby steps to get her to behave there. Which include multiple re-setting the scene and getting up and down as I ride, until it is no longer a big deal for her...work in progress.

She has also started fighting em a bit when we are working, throwing her head about a bit. But when I remember to release my hands on the reins she settles back down again straight away - hence why I'm hoping for some help this evening so that I can have eyes on the ground to keep me out of my head and tuned into what she needs from me. 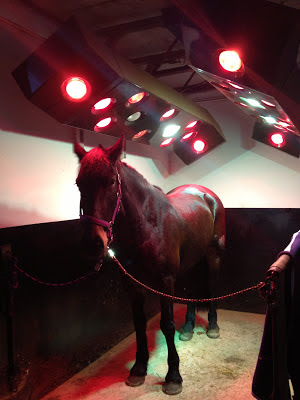 She was a little sweaty after our work, so after spending the time it took me to sort out the stables being fussed over by my mother while tied in the cross ties under her cooler - we decided to brave the big bad scary solarium - which of course caused her no problems at all. She is one cool customer. :D