Well it kind of was for Kika only she doesn't really know it yet!
I'm going to tell this tale interspersed with pictures of Kika and O as L and I hand-grazed them this evening in preperation for them going out for the "summer" (actually 6 months I only wish we had that long of a summer ;-) ) so that they won't give themselves tummy aches when they do get out by scoffing too much grass.

So now for my tale as to why Friday the 13th has stayed true to superstition and been unlucky for Miss Kika.
Long story short the wagon once again got out of the field - but if you want the whole story please keep reading as it is actually kind of funny as the Maggot literally wiggled free right before my eyes - talk about BRAZEN!
Bloody Brat!

Anyways if you're still reading, i popped the girls out to the field shortly after 3pm, sorted them out with some of our hay stash and provided them with a new 10KG Horselyx Original - plenty to keep them satisfied one would imagine, right?

Wrong if you're Kika!
First off the pair of them were hooning it around the place like eejits, up and down the field squealing like little kids in a playground - admittedly Kika hasn't been turned out since her last breakout on Monday, but she has been ridden all three days since.
So i left them at it having turned on the current on the front of the field so i knew they wouldn't go through there and out onto the "road" (it's really just a tarmac'ed slip way/backroad). While I busied myself fabricating a barrier of broken branches and old Christmas trees where I figured Kika was slipping out under the wire.

Once the quit their hooning, O settled on chowing down on some hay while Kika came to investigate what I was at. She followed me as a gathered some more fallen branches and came for a closer look at my man-made natural barrier. She sniffed at it a bit and decided it wasn't worth worrying about picking apart - she can pick apart our man-made barriers, *roll-eyes*, she picks the branches up with her teeth and tosses them around the place to amuse herself - i have seen her do this, the muppet.
I'm half afraid of the day she takes her eye out with her carry on!

Just because Kika thought better of breaking my barrier does not however mean she decided against the grass being greener on the other side - oh no! My Brazen Madam walked less than a meter from where I was making my "barrier", took two steps back, dropped her head and sprinted (in trot) at the wire.

Head under the wire, she lifted it as she passed under so that she passed the wire over her withers and was under the wire so fast i couldn't believe it! My disbelief was two-fold (a) that I caught her in the act and (b) that she was brazen enough to do it not 1 meter away from me - talk about a carefree rule breaker!
I followed her straight into the field grabbed her headcollar brought her back to the gate of our field and put her leadrope back on to bring her back to the stable - the maggot has had her last outing in "our" turnout area for this year, she will not be let loose again until she goes out for the summer at the start of May...I'll hand-graze her in the mean time, but i cannot trust her to stay put with that tempting grass field next door so she's now to stay inside!
I left her in her stable and came straight back to the field to check that O was ok, thankfully she has a healthy respect for fencing and doesn't attempt to take it on despite all her trumpetting as i brought Kika back to the stable. The YO's wife had returned her two ponies to the field on the otherside so I knew O wouldn't be too lonely and I chatted to her for a few mins as I kept an eye on O till she settled. C (the YO's wife) was telling me how Kika has kept her entertained while she's tended her ponies over the winter months. She said there isn't a day she's visited or a moment where Kika hasn't been at something or looked for ways to amuse herself - she said that she is one intelligent animal.
Lucky me eh? ;-)

Last photo is one I'm not mad to share as I think i look a state and didn't actually realise I was in the photo (L was taking them), but despite my looking like a gimp I like all photos of my Mischiveous Maggot so here we are: 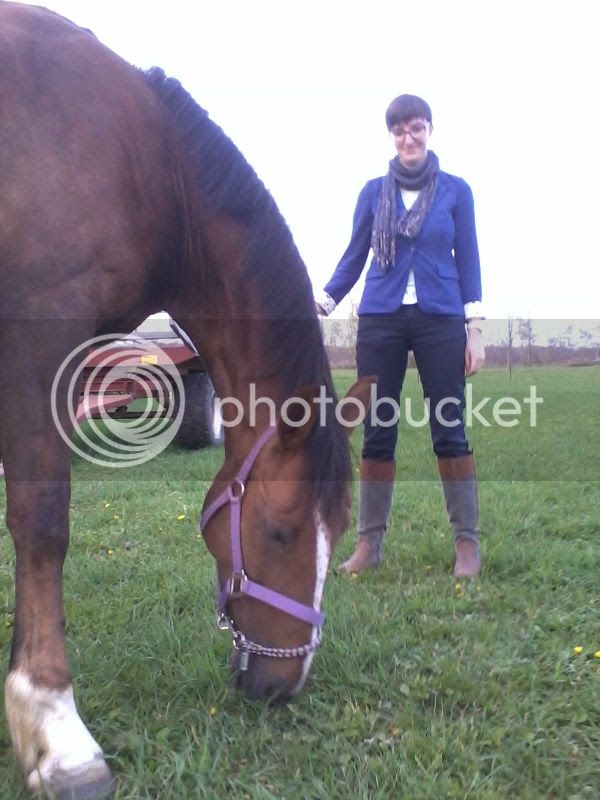 Estimated time-span spent by Kika in the field - less than 45mins!
Posted by Aoife at 01:12