I haven't spent as much time as I'd have liked in the saddle since I last updated, in fact I can count on one hand the times I've ridden since I last updated.
Sadly the Thursday after my last update my mother's brother passed away, while incredibly upsetting for those of us left behind mourning him, his passing was a blessing in some ways. I don't mean to be heartless, but he was "ill" for a long time, in that he was diagnosed with Huntington's (a degenerative nerve disease) when he was in his 30s and despite having being given only a decade to live he battled on for more almost 30 years.
Not only have we lost a valued family member but I feel quite at sea as Huntington's is a genetic/hereditary illness and as of yet there is no cure. Anyone of my maternal family members can be a carrier, we could never show symptoms yet we could pass it on unknowingly to children (should we have any). There are tests that can be done to find out if you are a carrier and/or if you may succumb to the illness - which is not unlike Parkinson's in that you lose control of your nervous system and "shake". However as there is nothing that can be done, I don't see the point in being tested to (a) find out I am not affected in which case my outlook on life wouldn't  change or (b) find out I will be affected and my outlook on life could change drastically. I'd rather continue to live in blissful ignorance, thanks, and enjoy every day as it comes!

That got a little heavier than I'd intended but it does kind of go someway to explaining why I didn't get much saddle time in recent weeks. Actually there is more to the story, upon my return to work last Tuesday following the service the weekend before. Our unit in work were deeply saddened by the loss of one of our proof-readers who had been found dead in her home the day before. Her funeral will take place tomorrow, again in Ireland but sadly I cannot go back again so soon. She was a wonderful colleague and a neighbour across the hall from my office. The end of October hasn't been a great. 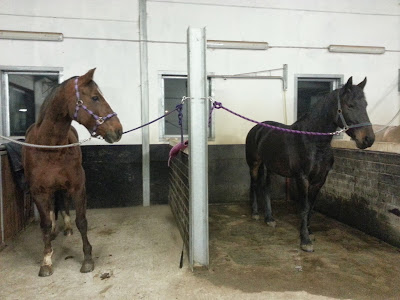 Right sorry, that's all the doom & gloom done for for this post! Some fuzzy pony pics to lighten the mood & bring us onto the title of this post. As long time followers of this blog will know, the yard I keep my girls on has limited turnout during the summer & none during the winter. I am lucky in that one of the "limited" turnout options for the summer is 24/7 and that "summer" last 6 months (May 1st to October 31st). I am extra lucky in that the family of a school friend of mine has a piece of land neighbouring the yard I livery the ladies on and they have given me the use of it for winter turnout. Happy days as my horses are "free range" horses & happiest when they are out of doors.


Two girls getting pampered before their first night in.


I managed to squeeze in a lovely spin on each girl Friday evening, the Guru had very kindly kept them both ticking over while I was away - they were both dreams to sit on again!


I learned during the summer from someone we met on holidays at the beach who had a gorgeous Friesian stallion (I added photos of him to my instagram account - also apologies to those who have seen the neighbouring picture already); that plaiting their name helps it to grow - I'm not sure how true this is, but it will keep it considerably more manageable.
<<<< Before & After shot, I love how long her mane is after getting.
Actually, it has a long way to go if her new neighbours is anything to go by, sadly no photos yet. But she has a hunky full friesian gelding to make googoo eyes at if she wishes! 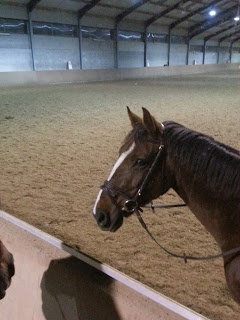 I did a fair bit of running around on Saturday, to various tack shops looking for one thing in particular - but as is often the way (and normally the reason I order online vs going into shops) I came away with many nice new things but not what I was looking for! ;-)

All the running around cut my horse riding time short, so Nancy ended up getting a day off as I ran out of time to ride her - I'm sure she was gutted! Kika did provide me with a  funny eyeballing-the-mirror-snap as we warmed up on a loose rein. She then continued in her good vein of form and gave me a very enjoyable spin - poor sod was a sodden sweaty mess when we were finished. She was such a hairy monster that I couldn't wait to get her clipped - I wonder if her energy levels will pick up and require less leg work from me for the rest of winter.

Sunday dawned drizzly & wet, L had offered to turn out the three girls as she was clipping for different people that day so would be at the barn anyways. I had a lunch date in town to celebrate a friends birthday only to come out to a couple missed calls and a voicemail to say that the cheeky sods were after busting out of the winter turnout - fair enough we hadn't yet turned on the electricity, so they had no real incentive to stay in, but still there was grazing for them and the reason we hadn't yet turned on the fencing was that we hoped they'd graze the blades that were touching off the tape.
It would appear they had other plans! 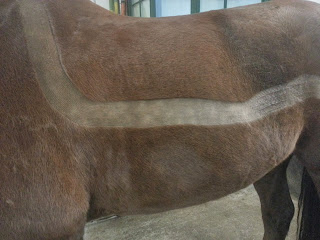 So I then spent the remaining daylight hours getting rained upon as I tried to cut back, stomp down on the things that would ground the electricity by touching off the bottom strand of our fencing tape.

When I got back up to the yard, probably looking more drowned-rat than human. L asked if I wanted her to clip Kika or wait for another night - we decided to go for it as we both had the time then although as you may remember from last year - LINK
Kika isn't exactly difficult to clip - she falls asleep & prompts people to ask if she has been sedated she is such a dream. :D 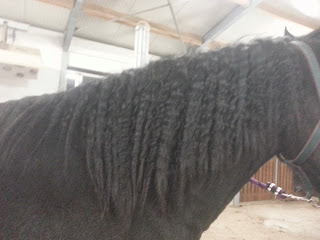 I had hoped to avoid clipping Nancy as her coat is considerably less she-bear than Miss Kika's (picture wooly mammoth & you get a good idea of Kika's winter wardrobe) and while it looked like we might get away with it, Miss Nancy has joined Kika in the wooly farm and sweats when worked - this is an inconvenience when the only times you can ride when working full-time are between 7 & 10pm, it doesn't leave sufficient time to dry the little darlings & get both worked and stables cleaned!

As Nancy hasn't been clipped before I decided to tie her in the grooming area next to Kika while she was being clipped to desensitize Nancy to the whirring of the clippers.
N was a little eyeball-ey at first but settled down like an old hand and stood quite as a lamb while I faffed about her mane & forelock...went for a different plait this time, luckily when you see where this post is going. ;)

I opted for a carriage/french plait and tried to make it as tight as possible in the hopes that it might hold better when stabled & out in the field so that i won't have to re-plait every night, but maybe every second day. Also, I think the less elastics in her mane the less damage they can do...right?!

I also had a bit of fun plaiting her forelock as I'm hoping to coax some of her mane to grow forward and not have to trim a bridle path but just re-train the way her hair grows...did something similar with K. 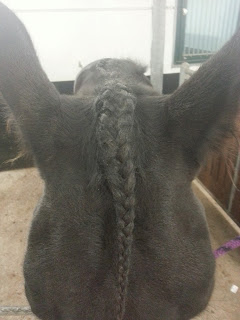 As Nancy was being such a doll, we decided to go all out and see what she would make of the being clipped experience. She swapped places with Kika, who stayed tied next door for moral support and I held Nancy as the clippers made their first forray into her coat.

She was a little look-ey at firs and if she'd been whites-of-eyes stressed we'd have stopped and tried again another day. As with most things she's encountered since arriving out here after a few seconds it was no big deal.
SHE IS SUCH A SUPERSTAR!
Would you believe that we even managed to do her face & lift her front legs to properly get her chest area done - it's so easy to forget she is only 4!


What a gem of a horse - every day she makes my decision to not let her pass me by more worth it! 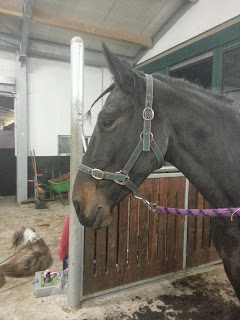 Her head looks much more refined now that her "beard" has been trimmed away, here's hoping this will make closing her noseband that much easier, ;)
You really wouldn't believe how big her head is - I don't think pictures do it's monsterous size justice....But who cares about headsize when what is between the ears is so honest & level-headed!
We also trimmed the excess hair growing from her ears - with the clippers no less...can I repeat once more that this is the first time she has been clipped and stood relaxed with a hind-leg cocked. A fellow livery passed and asked if we'd given her something, as they knew she hadn't been clipped before, lol!

Her coat is much finer that the she-bear Kika, it was so interesting to see the difference in their coats as they were both being clipped. i don't know why, but Nancy being half-Friesian had me thinking she'd have a thicker coat than Miss Kika...show's how little I know.

Is how much I love my horses coming across in this post?
I hope so - even with their madcap-escapologist ways!
I don't know which one of them made the bid for freedom yesterday - sadly I think both of mine lead L's mare astray and so neither has been turned out today and won't be until we can get the electricity sorted - I just don't trust them to stay put.

Following their haircuts both girls needed wrapping up for the evening, thankfully Kika's rugs do fit Nancy although I think just to be the safe side I shall be patrolling the online stores I bargain buy from for 6ft6 horseware rugs on offer.
Better safe than sorry & all that :)


Right, I think that's enough waffle out of me for another post - I've two final photos to leave you with.