Or so the Lords of Winterfell would have us believe, judging by the cold last night and the fog all day today I agree with them. ;)

Sadly as predicted last week work was mental and I didn't get out of the office till after 7pm most nights, plus I had the first round of civil service exams on Friday which if I can do enough to pass I would hopefully be made permanent in my job - which i really want to happen. I love my work & all the people i work with! *Fingers crossed*


This means that I didn't get to ride much last week, I rode Nancy on Monday evening for a quick spin (and took the above photo), L rode both of them Thursday I think and then I made my welcome return to both their backs on Saturday and Sunday. I had so much fun with both of them and spent hours both weekend days chillaxing with them. Having had the few days away from the saddle I could finally appreciate how far both girls & I have come since before the summer.

I am much more comfortable riding Nancy in an arena now and have more faith in myself & trust in her when we are working to know how far I can push and what I can ask for. I also know when to call her on her crap and not let her kid me into going too easy on her with her big brown eyes and "love-me" disposition. Her canter work in much improved and she is much more balanced, so much so in fact that she threw in a cheeky buck when I first asked her to canter on Saturday. So we did a lot more canter-trot transitions then I would normally have asked from her - not harm no foul & she didn't try it again the next day despite being in a different arena. ;)
Kika & I have re-found our mojo, I had been having a little trouble finding her "go-button" the previous few spins as I struggled to change the way I ride from nag-nag-nagging with my heels to trying to rely more on my lower leg/calf to give the aids. I am far from polished, but i do think clipping her and removing the excess hair has invariably helped my cause. :p

She did have a schooling session curtesy of the Guru, so that more than likely helped more than the clipping, lol, but she was still such a gem both days and was a pleasure to work with.

I rode both girls in the dressage saddle, both days - no idea why - a notion just came over me and I'm fairly paying for it now. They are such different rides, Nancy requires more steadying and slowing to help her balance while Kika is the opposite and prefers the be lazy & cut corners where she can. The switch from one to the other is fun & challenging.

As you'll also see from the above photo, Nancy got another new bridle curtesy of a girl at the yard ordering cob-size & being sent monster-size (Coldblood). We tried it on Nancy's huge head and as it fit with room to spare (the first thing I've ever had for her to do so) I have decided to buy it from the yard friend and she'll order it again in the correct size for her Haflinger - lol! Must get a picture of Miss Nancy in it and actually ride in it myself! There is an Equi Expo on in Saarbrucken (Germany) this weekend, I'm hoping to go on Saturday with two friends and pick up some bits & bobs - literally I want at least two more D-ring snaffles. I have Kika in one and she is much happier in her mouth, Nancy is in a loose ring and I'm hoping for more stability for her with a D-ring. 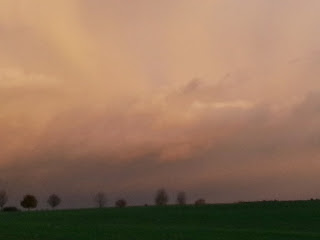 Don't have much else to say, but I do have two more pictures to share with you that I managed to capture yesterday evening of the sky. The clouds were really angry looking and stormy, but thankfully no rain came - sadly the cold did, so methinks that may have been why they were so ominous.

Sadly I spent too much time this weekend faffing over the girls and satisfying my need for saddle time that I didn't get myself organised to fix the fencing around the turnout area - I'm still none the wiser as to where the electric fencing is being grounded and/or why the current isn't being carried around as it should. So the girls are not going out for the afternoons, which sadly means poor Kika's hind legs are pretty stacked in the evening when I get there - but she's not lame and there is no heat in them. I'll get my backside in shape this weekend and sort out the fencing so that I can turn the Houdini's out again. Shall now shut up and leave you with the my favourite skyline picture from last night (below). PS: Not one of these has been photoshopped or edited in anyway - not even IG'd - the colours were just that mental, if not more so when you consider these are camera phone photos! 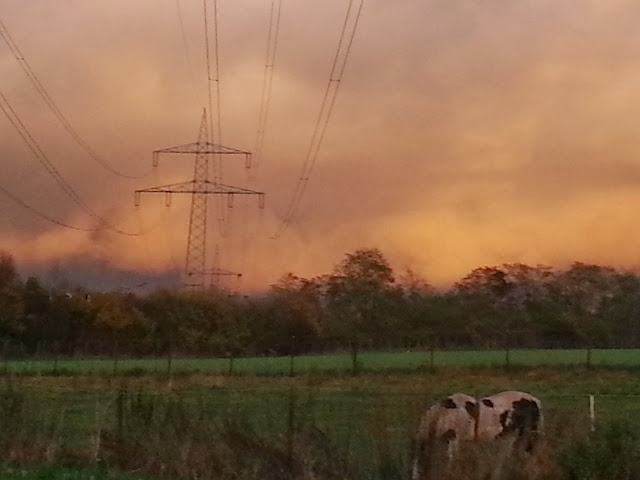