Weekend got off to a tricky start as our trip to the Equi-Expo in Saarbrucken (Germany) Saturday morning was a bit of a bust, upon our arrival at the expo-center we were kindly told by guy in Hi-Viz jacket that the Equi-Expo fair had been the previous day and that an entrepreneur/business start-up bash was being held Saturday - why they organised things that way around is beyond me...surely the business thing should've been on Friday & the horsey-thing Saturday, but whatevs!
Yes, eagle-eyed readers with working memories, the same thing happened to me last year - so that is two years in a row we've missed the expo...if we do manage to get it right next year they won't have the stuff I have been wanting for the last two years lol - perhaps we are just destined to not return!

Instead we went to three tack shops, continuing our country hopping. We went to a nice shop just outside Perl in Germany LINK and two in Metz, France: Padd, sadly they didn't have the horseshoe earrings in shop @equestriantrend but I did get a catalogue and have every intention of ordering a couple of things from them including the earrings. :-) I also picked up plaiting bands for Miss Nancy's mane, an orange Equi thème waterproof hi-viz quarter sheet for hacking in the woods, two Equi Thème fleece quarter sheets for everyday winter excercise (Red for Nancy & Blue for Miss Kika) and a purple halter holder for stable door.
We also went to a Decathlon where I was very good and only picked up a schooling whip for a little over a fiver, mine is busted...I'm very proud of my self-control in there as they had lost of lovely stuff!

I did get some saddle time in over the weekend: Kika on Saturday, Nancy on Sunday & Kika again last night. Both girls have successfully modelled their new sheets and looked mighty fine doing so, although I am biased & a muppet as I forgot to snap a shot of Kika rocking the blue stripes - oh well the brain might function some night this week and remember to get a picture - if anyone want's to see her mug ;-)
When riding Nancy on Sunday, the Guru was riding her mare in the arena at the same time as me - and as always, kindly offered me constructive criticism as I rode. It would appear that I am my own worst enemy and get in my own way when riding. She said that when walking on a loose rein to warm-up/cool-down my position is perfect, but that as soon as I pick up the reins intending to get to work I go to pot! Apparently I am trying to hard to do things right resulting in tension in my body which then breaks the horse' natural striding - darn getting stuck in my head!
Back to the mind-shut down attempts for me - I really need to get over this, but getting mad at myself is not the answer I don't think.
Anyone got any tips/advice?
L has suggested lunge work, her on the ground + me in the saddle - plan is to try with Kika first and see if I can make any progress on that front.
Kika got her first "snow" shoes this year, as you may be able to see from my poor quality picture she now has a rubber lining on the inside of her shoes (fronts only as barefoot behind) - this is supposed to help prevent snow packing under her hooves. Last year she was barefoot until January and I kept forgetting to ask farrier to do this in the following months, despite us still getting snowed on in March/April last year - lord was winter long in 2012/2013!
I've just realised you can also see the little "pointes" stud type things at the end of her shoe which gives her extra grip when walking on tarmac - she used to slip something awful after two weeks in new shoes before these.

I have been able to transition Nancy back to shoeless after her summer in front shoes (precautionary due to all forestry hacking we did from June to September) - both the farrier and myself are keeping tabs on the wear and tear on her feet and I shall not hesitate to have front shoes put back on if she needs them, but so far so good for my pocket. ;-) 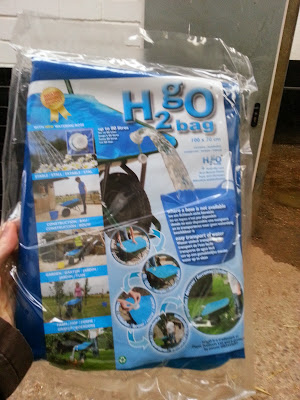 I forgot to snap a shot of the above in use, another fab recommendation from @equestriantrend's H2Go blogpost back in August. We used it for the first time Saturday evening and find it fantastic - it does exactly what it says on the packaging and is very straightforward to use. There is a handy anti-slip matt to put along the bottom of your wheelbarrow. Fill the blue bag from a house and away you go - easy-peasy!
Thanks so much for the recommendation Missus! If you haven't checked out her blog before, please do - it is chocka-block full of fab suggestions from gift ideas to clothing to everyday equine related items.

PS, aswell as blaying with the water-barrow we managed to fix the fencing on Sunday - so WE HAVE POWER! Now to score myself a day off work, so that if worse comes to worst and the nags do make another bid for freedom I won't be an hour in getting to them. And also just cos a day off would be awesome, ;)
Posted by Aoife at 11:42