I honestly do not know where the time keeps slipping away, by the time I actually finish recapping these lessons it'll have been weeks since the clinic!
Hopefully there are still a few peeps out there that are interested in watching these videos and more importantly I hope the info therein will help others as much as doing the clinic has helped me.

I don't know if I mentioned that this clinic ran over 2 days with 5 participants, one person couldn't follow the same set up as the rest of us as she has a young family and couldn't spare the majority of each day, unlike the rest of us lucky duckies. So she got a private hour and a half lesson & theory combined both evenings. Those of us that were lucky enough to take full advantage; each had a 45minute solo lesson in the morning, followed by lunch and group theory where the morning lessons videos were watched and dissected (see previous post for first lesson videos). The four of us were then split into two groups for an hour long combined lesson, which was basically mini-solo lessons where we each got 5-10 minutes of individual attention and then we went away to work on things alone while the second participant got some individual attention.

I really liked this set up, although admit to having had a bit of information overload by the end and my brain legit stopped working as you'll see in the videos. This second lesson was recorded for us to expand upon the info from the earlier lesson, add in the theory and practice under expert supervision. However these second lessons were not dissected in the theory sessions the following day.


Link (36 seconds)
Quick refresher, the above video starts off with Kika & my worst side (I am bad at both, but this is worse trust me). EB had helped me by providing a visual of a screw/linchpin at the top of my right leg (where the limb joins my body) to remind me to support Kika with right thigh and lift my knee to stop her falling in so much - all the while placing more weight on my left seat bone to help both of us straighten up.


Link (34 seconds)
The above video runs through my provisional checklist - more gets added to this during the day 2 lessons.
Checklist at the stage of these videos:

Left handed is slightly better for us vs right rein, in the above video I am trying to learn the feel to encourage Kika to spend more time putting weight down her left legs. She is right-side dominant and tries to get back to putting more weight down her favoured side faster. I found this exercise quite challenging (even more so when we did it in trot) as I hold my hand up and admit I don't have the most natural ability to feel what the horse is doing. It will be a work in progress as we both learn to rebalance and shift everything slightly more to the left. I shall have to sing that one line from the Beyoncé song to myself as I ride.

In fact I am secretly delighted to have thought of that little gem, here's hoping I can now ingrain it in my brain and sing to myself as I try to ride.


Link (55 seconds)
On to some trot work, boy does my inside heel make me cringe in the video above. While Kika looks alright, if not 100% stepping under herself I look like a hot mess and we unearth my biggest bugbear in trot work. I have somehow managed to master putting my legs on as I rise rather than squeezing as I sit. AKA - I am asking her to speed up while rising but then slowing her immediately back down when I sit in the saddle. Another friend who gave me pointers before couldn't figure out how I had managed to teach myself that nasty trick, but hopefully with EBs help I can start to undo the ingrained bad habit. This will be where the snow plow will come in, whereby I hope to over exaggerate (to my mind which means by the time the message actually gets down my limbs it won't be too loud) the skiing movement required to stop. Namely lower legs off as I rise, almost thinking toes in & heels out to stop me from using them.
Trotting checklist includes:
You'd think by now these things would be

but what can I say - I'm a slow learner and this is compacted by the fact that I have remembered wrong. I don't doubt I was taught correctly however too many years riding alone have given me mucho bad habitos.

The above is a very quick clip for comparisons sake so that I can see what straighter looks like. This video actually also reminded me that I forgot to mention at the start of the post that for this lesson I lowered my left stirrup by one to help me lengthen my leg and sit more left in the saddle. Something I am still riding with as I attempt to retrain my body.

Actually acute video watchers may have noticed an adorable guest in the corner (aka my marvelous mama) who came along to watch the lesson and was blown away by (a) the difference in my riding and (b) the great ways Elaine was able to explain what she wanted and why. My mother rode horses when she was younger, and it is actually her sister who bred Nancy and now runs the farm where both Kika & Nancy lived before joining me in Lux. When she drops in to watch me ride from time to time, she had been mentioning that I was over to one side but didn't know what to suggest fixing to fix me - we are both super glad for EB.

Some more trot work in above video on our bad right rein, despite my floating outside leg I am very impressed with the strides we have made in this video. It is great to see the improvements EB has had on me and wish I could ride more like that every time I climb aboard. 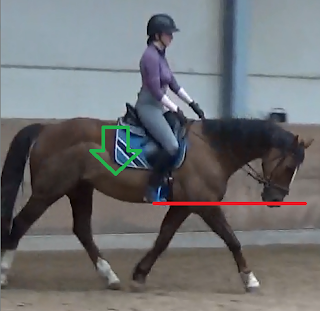 The above screenshot with my awesome paint skills is hoping to illustrate some of the points I shared in the General Takeaway post I shared first - LINK.
Her nose is a little BTV and she isn't quite stepping under herself and we won't even comment on wtf my hands are doing (or the fact that a bus could be comfortable driven between them) but as the red line shows her chest is not lower than the mid point of her belly and while she could still step into her tracks a bit better; the triangles that form the M of her legs are pretty close in size.
The green arrow I indelicately added is to highlight what looks like a shadow - this is a clue to how the horse is using themselves.
I cannot remember exactly what it means, but I think it shows the use of a muscle that means they are lifting their ribcage and working over their backs comfortably.

Two other RWYM theory stalwarts that I have thus far forgotten to mention can be explained with the help of the above screenshot.
* The rider is in a good position if it looks like they would land on their feet/upright if the horse was magicked away
*The horse is working well if they land on their belly when their legs are magicked away. A horse down on its forehand would tip forward (arse-over-tit) without legs if it's chest is lower than the midpoint of its belly.

You can probably see she is beginning to tire, and let me tell you she wasn't the only one! Neither one of us have ridden twice in the one day for a long time - I'm actually not sure she ever has been ridden twice in one day & definitely not in a clinic setting where the concentration levels are considerably higher than on any other given day.
However in saying this can we take a moment to remember that the previous two videos are of us trotting on our BAD side - compare these to the ones in the previous post which were taken earlier the same day and I have to say I am super impressed with the changes - now to maintain them without the excellent coaching.
The end of this video makes me lol as you can see how we lose concentration just as I reward her, I know this is more my fault that hers - but this is Kika's character to a T and makes me smile every time.


Link (41 seconds)
This video shows us both tiring more, she gets heavy and a little sticky like she's pulling her feet out of muddy ground - but considering the concentration this all requires neither one of us can be blamed.
EB rightly calls me out at the start of the video for getting too "busy" in the saddle out of desperation and goes on to run through the laundry list of things I am supposed to be thinking of as I ride. I shall type them up here so that I can refer back to them myself at a glance, however my sheepish "yep" in answer to her query as to whether I have all that was a testament to my tired mind and in actual fact I was concentrating on keeping her from stalling more than my laundry list. #shame

*sigh*
I feel like the above "simples" image should be reused here - but I think this post is going to be long enough without repeating imagery.


Link (30 seconds)
In the above video my brain was really lagging, it takes me ages to answer as I honestly couldn't even tell what my legs were doing #mortified
Kika is a trooper to put up with me, she truly outdid herself - I honestly thought the toys would be pitched out of the pram but at no stage the entire weekend did she threaten any untoward behaviour. Amen says I, and long may it continue - she has been so good that Nancy's leasee doesn't believe the stories of our past disagreements and tbh i hope she never witnesses them as I most def do not wish to retread that terrain!

In the next and final video (phew I hear you sigh) my brain had legit checked out. I may be talking, but I can honestly say that my brain had no idea what my legs were doing. I was in such a brain fog by that point that I couldn't even tell you where my feet were and that is probably why EB rightfully giggles at me and my utter lack of coordination #deserved

And that was Day 1 one of the clinic done and dusted.
These videos just go to prove that if you can get the basics right things just improve exponentially - the differences between the videos in the previous post and these blow my mind. I am under no illusions that the crux of the problem is me and I am miles from having this stuff down, but seeing what a difference a day can make has given me the boost to plug away at the basics and remedy my terrible habits. If I can make this kind of improvement in one day - what might we be able to achieve if we can get permission for EB to come back for another clinic?!
I will try to not take so long in sharing the videos and info from Day 2!
Posted by Aoife at 18:21