I still have so much to process from the weekend that even three days later I am not sure I can really do justice to everything that was said. Apologies if the posts on this topic are a hodge podge of thoughts/notes, I really just want to get them down somewhere I can refer back to them as needed.

I figured I'd start with some general tidbits/takeaways I got from the weekend that don't necessarily apply 100% to me but that I found interesting as an equestrienne in my quest to improve. I also snagged photos of the blackboard section of the theory which can reside in this post and not overwhelm the already media heavy posts to come.
I feel I should first commend the set up of this clinic, there were different options available for how we wanted to participate in the clinic. We opted for individual lessons in the morning, joint theory after lunch and then a group lesson in the evening with 2 participants. All riding sections are filmed for comments in the theory and posterity sake for the riders. My videos will appear in posts later this week/over the weekend.

Elaine was (is) amazing. She has so much knowledge and insight to share and no matter what questions were asked she had answers/thoughts/ideas/exercises to help both rider and horse. Not only could she answer every query, but if we didn't understand the first way she explained she could rephrase it numerous different ways with many different visual and/or key word examples to help us remember going forward.

The theory section was not just watching the videos of the morning rides nor blackboard explanations; it was 100% interactive with each participant taking on the role of the horse - legit on all 4s - and rider to demonstrate the correct and most common incorrect ways of sitting on a horse. This was eye opening to feel from the horse's point of view just how much our balance/seat bones/position in the tack affects their way of going & ability to move. #mindblown
This was not the only interactive aspect to the theory section of the clinic, there was an exercise ball present upon which we could simulate riding a horse without damaging each other 😂
We were all recommended to invest in our own exercise balls and given different exercises to help strengthen our weaknesses. Needless to say I was useless at balancing on my own on the ball without my feet on the ground (the videos will better show part of the reasons why) also hammered home my need to build some semblance of core strength - hello planking in my immediate future. 😅

Now for the actual tidbits & general takeaways I managed to make a note of: 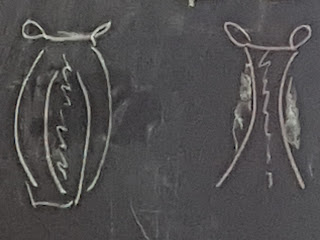 Downward transition DO
Half Halt
Canter work
I know this is a lot of info in one post and the wording may not make sense to those who haven't followed a similar course before, but hopefully you can still take something from these tidbits and won't be too turned off ahead of the verbal vomit/media heavy posts that will follow as we delve into my actual riding lessons!
Posted by Aoife at 17:42