Bits and Bobs - a bit of a catch up post

I'm enjoying a lovely long weekend, having Friday and today (Monday) off work. In fact the weekend was kick started a little early as I was able to leave work early on Thursday to be at the barn in time to meet, who I'd hoped would be the last saddle fitter for, to try out some saddles. We settled on three to try, 2 Stubben's and another GP one who's brand I cannot remember right now (but I think began with P) - but this isn't really important as it didn't suit myself or K as well as the Stubbens, a VSD Roxane and a VSD Genisis.
It was a tough call as both saddles gave me a good ride, and I was comfortable in both. Of course one was predictably more expensive than the other (not by much admittedly) and typically this was the one to fit Kika best of the two. This was the Genisis, I’m slightly ashamed to admit that superficiality and aesthetics did colour my judgment, well that and the fact it had the new Biomex technology to support your back in the seat. The colour of this saddle was a more “normal” shade of brown and was very near the brown of my bridle which I have had for 4 years. I figured the little bit extra I was spending on the saddle was justified in the fact that it would negate the need to buy a new bridle and martingale and would also give my sometimes dodgy back some helpful support. Well that and the fact that it was the best fitting saddle for the mare, the fitter also was quick to reassure that any and all necessary adjustments due to musculation and/or wastage could be made as saddle comprised of malleable gullet and wool flocking. (Examples of the colours I was dealing with - the one I decided against was in this colour LINK and the one I went for is closer to this colour LINK more chocolate brown IMO - I think the second picture is closest to the saddle I have bought, will attach pictures when I remember to take some!)
I went to collect the saddle with all the trimmings from the tack shop on the Friday, as I had to buy new stirrup leathers and irons also (neither of which the fitter had brought with him on Thursday). He very kindly (in an astute businessman-way) gave me the necessary cleansing products and the rubber rein stoppers and Lekkerli treats I was also buying for free, probably didn’t amount to more than €30 – but I went home happy. I then spent Friday evening oiling my new saddle which I managed to mark already due to my nails having been erring on the long side – they were cut first thing Saturday morning!

Saturday was a great day; I returned the saddle which I had been trying but decided against in the end to the other tack shop (photo of me riding in it below), helped my mother quickly with the food shopping (necessary evil to living) then made it to the barn where I cleaned out my tack locker which was minging due to mice making their way in and pillaging some of the vitamin treats I keep for herself. I cleaned the whole thing out, sweeping brush and all, taped up the wholes that the little blighters were coming in through and backed everything away nice and neatly. I then proceeded to soap the lovely new saddle as Kika turned in the walker. My good friend L (who I have mentioned a good few times) had offered to watch me ride in the saddle and give me some pointers to get our partnership off on the right foot and working properly now that we have our new saddle. Our thirty minute “lesson” went really well, Kika was a star.
Things I have to work on:

1)      To stop niggling at her with my heels – if she doesn’t respond to my first request she gets a reminded from the stick.
2)      Keep my heels down
3)      Slow our trot to make her work more so than rush
4)      Work more on circles then straight lines
5)      Keep her in an outline as best I can at all times (we are doing much better at this now that 6 months ago)
6)      Be stricter with myself when changing reins and keep her straight
7)      Plenty transitions
She was full of compliments for my girl, not having seen her ridden for quite a while – think the last time she’d seen her ridden was when we went for a hack together and Kika got excited at the end and reared with me. Thankfully she hasn’t done that since then and that was back in April/May I think! She was most complimentary about how calm and well behaved she was, to which I happily pointed out that she has been this content creature since coming back into work after the injury and going out to grass. Winter will be our big test, but plenty good work to fit in the mean time.

Saturday afternoon and evening was spent with L spectating at a local international dressage competition, where we watched the Keur. I was glad to see an Irish rider in the form of Judy Reynolds, which reminds me I must google her to see where she’s based; and my favourite horse to watch was called Santos, think it was actually DDL Santos. A beautiful grey who’s rider rode really well and to interesting music choice – eye-catching, they were definitely the combination that stood out for me.

Sunday was due to be a lungeing day for Kika, but when I brought her in from the field and started our grooming I noticed her face/jawline was swollen. L who was also around had a look and suggested I cold hose it if she’d let me or sponge the swelling to see if it’d go down. Thankfully it did, and when I checked her today it was still visible but much less so than yesterday. We had been pencilled in for a return over the coloured poles (trotting poles and we may have worked up to a small cross poll had all gone well) under L’s supervision today, but with her swelling yesterday we decided to leave her alone for today. We figured she may have just been unlucky and received a sting, which to my mind was plausible as she had jumped for no reason while being led in from the field crossing a patch of grass that she walks on every day to get to and from her field...

So that is my news for now, I’ll leave ye with the most recent photos I have of us. Apologies to those who have seen them before and the fact that the quality isn’t great.
The first is a pic of Kika and I in the second hand saddle we were trying out (but ultimately decided against), although my friend C graciously agreed to take pics of us last Wednesday only one came out that I care to share as the lighting was awkward, the camera is pretty old and the zoom is broken, that and the fact that the mare did not want to settle in that arena so most pictures she was doing a better giraffe impression then that of a horse that does know how to carry herself. Closest shot to a proper outline I have from that mounted session, note I was working in sitting trot at the time and am not on the wrong diagonal – although typically I am more often than not found in the wrong: 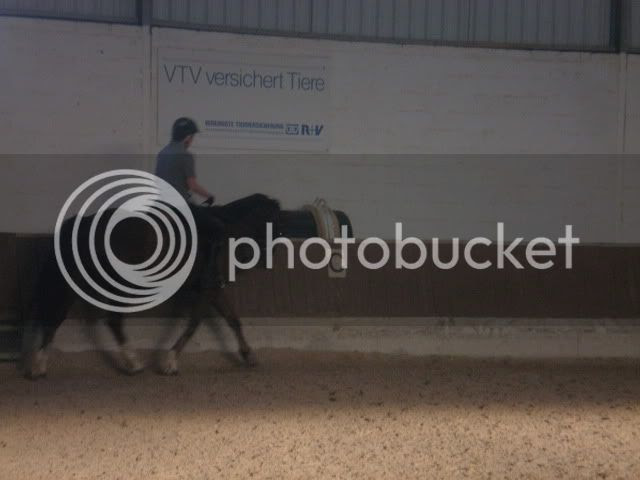 LINK if picture too small.

The next two shots are self-indulgent shots showing off Kika’s new fly fringe thereby continuing my purplification ponio process...slowly slowly i am expanding the collection, ;) 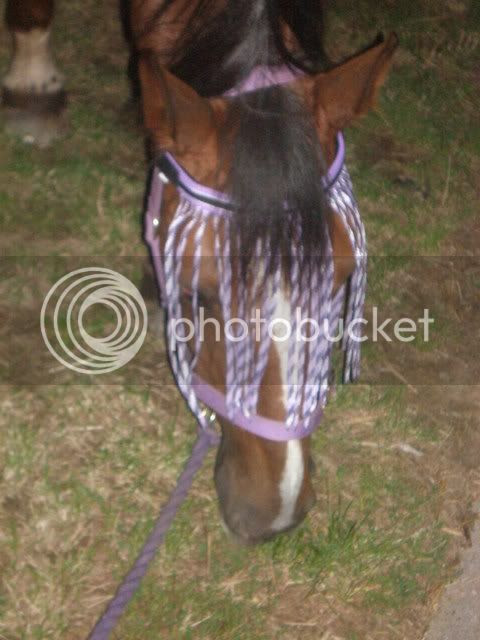 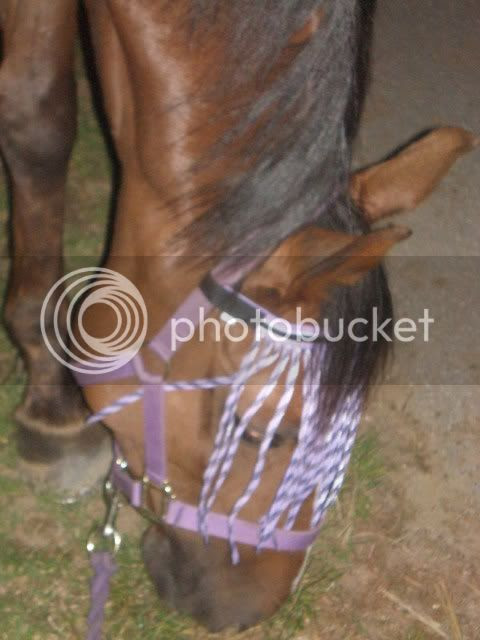 All going well I should be lungeing tomorrow evening and the riding the following two evenings, admittedly this will depend on swelling on her face. She is currently out without her headcollar to minimise any risk of rubbing etc. My new schedule for her is to ride two days in a row, lunge day then ride two days followed by a day off - then rinse and repeat. L who I jokingly call my coach reckons the mare will only benefit from being ridden two days in a row to hammer home the lessons we intend to work on.
Speaking of working on lessons, ordered 3 books off Amazon today (Lysette you'll be impressed), they include the George Morris Equitation one. I took so much from his masterclass that i am curious to read what you call your Bible. Majority of it will probably be lost on me, but I hope to learn!
Posted by Aoife at 20:01