Kika and I had another lesson yesterday evening with The Guru.
Again I chanced my arm riding without lungeing and thankfully all went well again!

I had resolved before sitting in the saddle that I was going to be more possitive and pro-active in my attitude to riding and try harder to work on the tips L has been giving me. To make sure all was well before I got up I always (when not lungeing) hand walk Kika a couple of laps around the arena to see what kind of form we are in and to try and gauge if there'll be any sticky situations from horse-eating monsters hiding in the shadows. After 2 laps in each direction I hopped up and walked a couple more laps slowly bringing Kika into more of an outline and encouraging her to calmly get her mind onto working matters. When L arrived we started working on our circles at walk first, she rightly called me on my shambolic attempts at circling and reminded me how to ride a proper circle, keeping K bent and moving forward in a smooth manner - easier said than done, especially as Kika is quite maleable and my legs are weak so our circles can often look more like rectangles or squares.

Again, my fault as I mentioned I've weak and don't always give her the guidance she needs to get it right, of the same token she doesn't always go out of her way to make it easy for me as to do it right means more work for her,

We moved up to try and tried to keep the same smooth circles going, and now that I knew what I was at they improved somewhat, when i was concentratin solely on them in any case - when I had other things to think about aswell - they could get a little lopsided again...but baby steps and we'll get there!

We made a smooth transition from circles to a couple serpentines, keeping the same principles in play - tension in outer rein, guiding and re-inforcement from legs and smooth non-rushed bends around the corner - thinking back on it now they were very smooth serpentines where we managed to keep very balanced for us - still far from picture perfect but we are slowly getting there!
Mixed it up with a couple more circles with lots of rein changes along the diagonal, another thing that i need to work on. Thanks to circle work we'd been doing I was getting a better bend and giving her more time to come around the bend, but we'd loose ourselves going straight as my legs would just hang there doing nothing so she was inclined to meander her way along the diagonal, looking more like a buzzing bee then an on target arrow - again my fault not hers!
We did some work on our canter, with my backside still in the saddle - not awesome for her but apparently easier for me then when I was "en suspension" as I wasn't unbalancing her by flopping all over the place like a fish on a hook above her back! When I got all my aids right we got correct strike offs, when i was a little off - she struck off wrong - so it really is all down to me! She is too such a senstive soul, Bless!
Oddly for us, the side we struggled most with our strike off was our typically best side - i guess on some level i must have subconsciously taken it for granted that because we managed on our "bad" side without problems that the "good" side would come eaiser and perhaps i stopped working as hard...in fact knowing me this is most likely what happened

We then tried some new "fancy" stuff!
(Fancy for us, mundane and boring probably for established equestrians!)

L asked me did Kika know how to reserve/back up under saddle. I said i used to be able to ask her to do it when we lived in Ireland, but that since coming here and she'd become more prone to rearing I was less enamoured with giving confusing signals while restricting head movement. But as I'd dropped my stick earlier in the lesson and L had picked it up she said we'd work on it with her on the ground tapping K's chest with the head of the whip to encourage her backwards. After establishing the correct aids, we attempted it and got a step backwards but a bit of a headtoss and fussyness when a second step back was looked for and she took it begrudgingly, so no worries we got what we wanted and praise and reward was given.
We moved forward and L asked did i know how to ask Kika to cross her legs, I'm sure there is a proper term for this but I don't know it!

So she had me turn Kika down the center line at C and having explained the aid to me, helped my first attempt by standing beside us and tapping with the stick.

Success we got a few crosses - so heaped the prais on Kika then came back down the center line at A and I attempted to give the aids on my own - not as good but may have managed a few steps - then back to C and L asked that i coax her the other way - easy in theory...Not so much for my brain! I had the hands right but my legs were getting the same message and both were squeezing, poor horse! Talk about mixed messages - even when i realsied what I was doing I was incapable of correcting myself - If i knew how my brain worked i'd be much better off!!!

Rather than frustrate the poor horse with my oddly malfunctioning limbs we went back to some trot work, on the positive side our-up-a-gear-to-trot work has come on in leaps and bounds, it is now a much smoother transtition and Kika and I are staying together better and maintaining contact and outline - Happy Days. This was when we but in the extra work on our diagonals and attempting to straighten them.

Plenty new ground attempted and some improvements all around - i ended the lesson a very happy camper and much more positively than on Friday - mental attitude really does help. So many influences to horse riding - and people think it's easy...sit up, point and move!

As a thank you for reading all this, and just cos I think she looks fab (in my completely unbiased opinion - as if that exists!)
A few pics of Kika taken on my phone after the lesson, her roll in the sand and some pampering to clean her up before bedtime!

And two practically identical ones, but i couldn't chose between them! 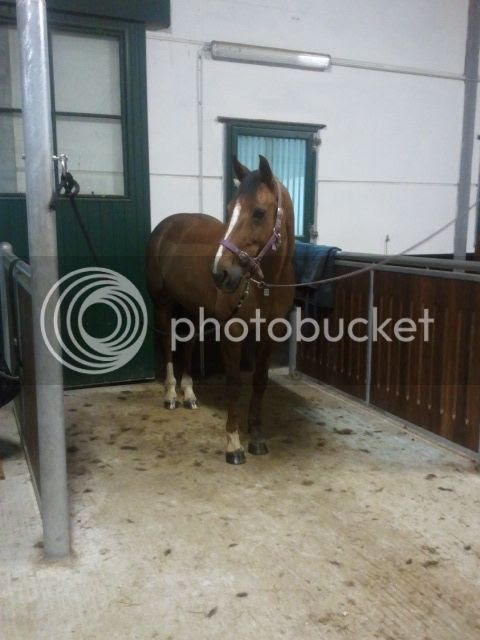 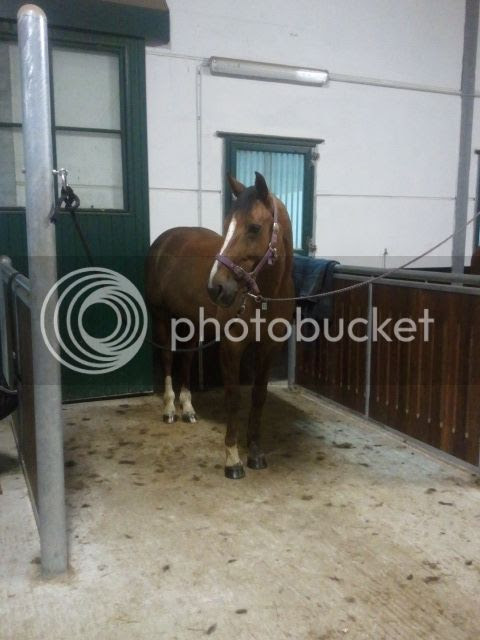 Thanks for reading! L has today off work and has offered to ride her for me this evening as the friend who i borrow the saddle from wants to use it when i would normally be riding and as it is her saddle i care not to kick up a fuss as she very kindly lends it to me all the time!
I've to ring my saddle fitter today and see if my saddle is back with him, or on it's way back as a representative from Stubben is supposed to be coming to the yard tomorrow - so fingers crossed they have altered my saddle! I'm also hoping to have the saddle fitter check the dressage saddle I've been borrowing as I hope to buy it!
Fingers crossed!
Posted by Aoife at 09:26