I had such a big grin on my face this weekend - Nancy & I successfully had our first hack in the woods on Sunday. I shouldn't be surprised that, as with everything else, she took the whole thing in her stride - she is one cool head!

Will start from the beginning of the weekend now that I have that first bit of exciting news out of the way.

Friday: I had a half day from work, thank you Easter holiday spillover!
I was a little late leaving work due to the place shutting up shop till today, so had to be sure everything was done before we left for the weekend. That had a bit of a knock-on stress factor for the afternoon as I had to get out to yard to put horses out, then be back in town for a driving lesson from 3 to 4 before going home again for a very late lunch.  Then back to the yard to lunge Miss Kika for the first time in weeks - maybe even months. cannot remember when I last lunged her! She was a super star.
Phew, it was a bit of a mad dash - I'll tell you that for nothing!
But the evening only got better as the Guru & I had decided the previous night to go check out the French film Jappeloup, the story of French show jumper Pierre Durand and his pint sized ride Jappeloup :)
Great feelgood film for a still horse-mad girl!


Saturday: The Guru, her horse O, her two bearded collies, myself & Kika and another friend & C headed out for a sedate hack in the woods - but boy was it cold! I was very cheeky and put Kika's quarter/exercise sheet (which really shouldn't be seen in public till it gets  a wash as she shedded something awful this year!) on her so that I could fasten it over my legs when I got cold!
We had a lovely hack the three of us!
L, the dogs & I met back later that afternoon to take Nancy for a walk in the woods so that she could see what the story was while I was safely on the ground should anything become amiss.
Gosh does she have a long stride when you're walking alongside her for an hour - phew, only upside is when we went up hills she did most of the work for me ;-)
She called out twice, but other than that made no fuss whatsoever and happily took in all her surroundings.


Sunday: D-Day for Nancy & my forest adventure.
It dawned a glorious sunny day, a fantastic contrast to the previous freezing day. When we were in the sunshine we were lovely and warm as can be seen from Kika's sunbathing photos ;-)
L, O & the dogs were our companions for our first adventure. We started out following the same route we'd walked on Saturday, but branched off to make it a little longer before rejoining the trail to finish up. We met cyclists & people walking with kids & buggies all to no fuss, she didn't even look at them! We passed piles of logs, near the road with cars zooming along - she was a super star, not looking at anything! Long may it last is all I say - considering the other beasty would (and does) jump at her own shadow!
N & O then got to spend the day in the turnout, I did fill the haynets - they weren't left starving as the above photo might suggest, lol! 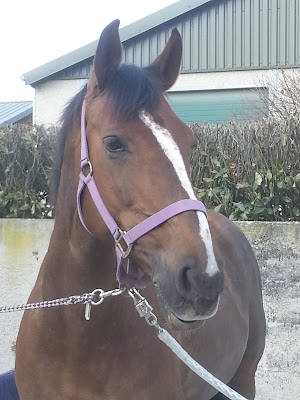 Then it was Kika's turn for a spin, we returned to arena work which she'd had a little deserved break from since Wednesday's jumping session. I would've liked to ride outside in the sunshine, but I wasn't the only one with that desire, so I opted for an empty arena and had a blast.
We warmed up with w/t/c, circled & serpentined. It was all so lovely and calm that I decided to try incorporate some of our lunge work from Friday, by cantering a decreasing in size circle before spiralling out again - something we often to in trot, but haven't tried in canter unsupervised before. We are much more balanced & she is better muscled now to be able to cope with this kind of work. We then did some more trot work, lots of changing of rein, figures of eight, walk/trot transitions, small volts in walk and trot (rising + sitting). Incorporated some more canter work and worked on some simple changes along the diagonals before circling while maintaining the canter. It was far from perfect all the time, we did get a couple of wrong lead strike offs but we quickly and calmly corrected this and finished on a very good note with one very happy rider! :-D
Posted by Aoife at 11:06