First off I want to say a mahoosive thank you to all who participated in the Celebratory Contest. I  had no idea we had so many anonymous readers, please don't be shy about posting comments in the future now that you have posted one - I LOVE hearing from readers!

And the winner is commenter number 12 -  Kathrin.
Congratulations, thank you for reading & commenting; I will be in touch to find out whether you would like a saddle pad or shirt & sort out the ordering of such. :-)

Right now that the official business has been dealt with, most will probably stop reading this post, but if you bear with me there will be more photos! :-P

If you're still reading I had a wonderful weekend, the weather was fabulous! Saturday was unfortunately a bit of a write off for me horse-riding wise though as I was out late on Friday night, I don't drink so not hungover just up way past my usual bedtime, lol. Didn't get to bed until about 4am when I am usually asleep at the latest by 11.30-12pm on a weekend!
After her quiet week of no work Nancy got a lunge Saturday evening, which in itself was a workout from me as she is a strong beasty and likes to try and go faster all the time - but we're getting better at listening to vocal commands and slowing down when asked. Kika was the lucky one and spent the day outside in the turnout area so I was naughty & didn't do anything with her on Saturday.

Sunday, the Guru & I had arranged to go for a hack in the woods in the morning - it was a glorious day. L & I were like 2 big kids, me more so than her as I am just a big child playing with my first "pony".


We had a blast hacking in the woods, both mares plodding along on the buckle. Kika & I even took the lead when we met cyclist, joggers & to go first up a potentially scary hill, hahaha. We had fun trotting side-by-side & with em behind - where Kika fearing ebing left behind resorted to pony-club still tiny steps in a vain attempt at speed - it was hilarious I could only laugh like a lunatic as i was fired out of the saddle faster then I could rise - what a bumpy ride! ;-)


We also got some lovely cantering stretches. Kika was a star to put up with my desire to splash through all the puddles that we came across.

So now that you've an idea as to the puddles I was playing with - you'll understand why Kika's legs ended up looking like this... 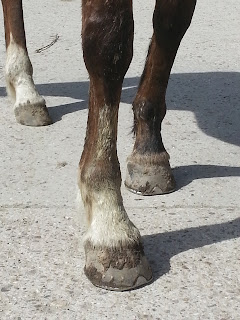 I was on such a high after our 2 hour hack and feeling like such a kid that i couldn't resist attempting to do "around-the-world" on Kika. It used to be an exercise my aunt (who taught me how to ride) used to have us do as kids. Where you completely move around in the saddle, ideally someone holds the horse for you / but Kika was in good form so I chanced she'd stand still - which she dutifully did. It wasn't until I was facing backwards that I realised how long it has been since I did this particular exercise...my legs are considerably longer then they were then and took a lot more organising to sort myself out to get back the right way! *blushing*

Cleaned her up and turned herself & O out for a bit while I rode Nancy in the main arena, who got quite hot both in her attempts to canter when I wanted to trot and just hot in general as it was a gloriously sunny day - so she got her first shower since arriving in Lux and as with everything else we have done with her - she was an angel and possibly enjoyed it ... I know I'd have appreciated a shower by then, teehee!
Tied her outside for a few minutes to sunbathe & dry while I cleaned up her deposits from the arena, then swapped her for Kika in the turnout area and tied Kika up to sunbathe while I cleaned my tack & leather gear!

It would be embarassing to admit when my gear was last cleaned, but it has been ages as I am a lazy sod who like good weather to clean my gear so that I can sit outside and make it a pleasurable experience!

L & I then walked her lovely pooches and decided to take Nancy & O from the field on the stroll with us so that we could let them graze afterwards. We do this every year to allow their stomachs & systems a chance to get re-acquainted with grass eating after the winter "indoors" so that they don't eat too much fresh grass when they first get out next month and make themselves sick!


Turned them back out while I helped L with pole work for another horse she rides (W), before going back to hang the haynets for today, refill the water in the turnout area and bring the girls in for the night.