Thankfully the ponios and I haven't been suffering from communication meltdowns but the heat is melting us. Temps are topping 30+C these days, so horses are getting dowsed in fly spray and have new fly masks while they are in the field (photos to follow tomorrow if i remember to take some tonight!) and as well as the their courtly/knightly fly rugs when we are hacking they now also get fly fringes attached to their bridles to try and help keep the flies at bay...now if only there was such inventions for humans I am sure I would have less bite marks! :p


Monday consisted of hacking Nancy back to the field from the yard while The Guru rode her mare and led Miss Kika like a giant puppy dog, she is so good on the lead it is hilarious to watch how she can walk/trot & do everything while actually dozing...silly sod!

Tuesday & Wednesday ended up being days off for both girls as I had dinner plans with friends both nights and didn't make it out to the field.

Thursday was Kika's turn to get re-acquainted with working life after her week off for being like Cinderella and losing a shoe. She had one spook at god knows what but other than that was good as gold, including giving me some really nice work. 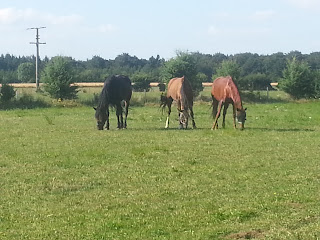 Friday was great fun as I'd the afternoon off work, vive l'été, so I decided to pack the car with my gear and then walk to the field via the stable to collect things like fly fringes and other bits & bobs I'd left at the yard after our overnight stay on Sunday ahead of the farrier's visit on the Monday.
As well as spending an hour poo-picking in the lovely sunshine under the careful supervision of the lovely ladies in their "new" (for this year) fly fringes - The Mammy opted to come with us for our hack and took the Lovely Nancy for a spin! 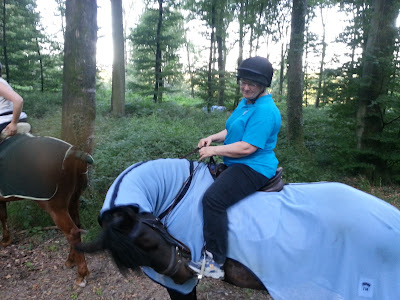 Kika behaved like an angel that day and bravely led the way down into the woods and through the stream passed all the families etc out by the pic-nick area for a lovely start to the weekend - what a view we must have given them...but thankfully we didn't give them a show! ;-)
Of course it almost goes without saying that Nancy was angelic, even if she took the mick a little in that she plodded along really slowly - i prefer to think of it as she looked after my mother rather then testing her luck!

I got a lift out to the equine store across the border in Belgium which does the muesli we feed at a fraction of the price of any of the Lux stores we've found it in. While there I also splurged on fly masks for each girl as they are horrible at their current field. Kika was even getting a bit of a weepy eye. :( 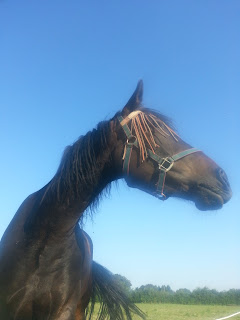 Saturday was a day off for Kika as I decided to take Nancy out to remind her of her manners and that she can't dawdle along at her own pace nor chose to drop her head willy-nilly to get rid of flies...she had been taking the mick the two previous outings and would scratch her nose once - fair enough, I said - but then she'd insist on stopping numerous other times in quick succession to capitalise on the first break...that was not on in my book. So we set out with the fly fringes attached to the bridle just below the browband & their fly rugs which are now staples of our riding kit, I had to have a few heels in side digs as we made our way down the first hill to get to the river crossing where again people were pic-nicking in the great weather. However, today they got a bit of a show as Nancy and I who were supposed to be in the lead, so that the Guru could keep an eye on the dogs. Nancy decided that she couldn't possibly go a step further without scratching her nose - and studiously ignored me when I dug my heels in her side and tried to get her head back up - she then got a fright when out of the corner of her eye a dog started barking at L's dogs and so tipped forward landing on her knees. Scared me something unreal as I didn't want either of us going down on the tarmac!
I think she scared herself a little bit as well and I was glad that we were immediately crossing the stream so that she could have some cool clean water on her limbs incase she'd done herself a mischief. Thankfully once safely across the other side I could check that she hadn't cut herself and decide whether our hack would have to be cut short or if we could keep going.

Thankfully all was well, she wasn't lame and miraculously hadn't cut herself so we kept going walking to make sure everything was still ok.
We did 90% walking as it was still extremely warm for the animals and ourselves, we stuck mostly to the wooded areas in the hopes of avoiding the worst of the flies, and succeeded to an extent. We had one little trot and a bit of a canter where Nancy & I took the lead to set the pace. The previous time I'd cantered her on a trail, the Guru said I should steady her more and sit into the saddle to keep her steady. I had been leaning forward XC-gallop-style (2-point?), to keep my ass out of the saddle so as not to unbalance/inhibit her baby-self and her developing back. However the Guru reckoned i was accidentally urging her too fast in doing that - so i figured it wouldn't hurt to change it up next time and low-and-behold we had a lovely calm canter...which funnily enough annoyed L's mare no end at having to stay behind and go at my pace - that they had a bit of a discussion for a good bit of the way home - ah chestnut mares! Never a dull moment! :D

Sunday we decided to try and beat the flies & heat by going at 10am instead of waiting till the evening and it was Nancy's turn for another day off & Kika's turn to show me how brave she still was - ahem...that didn't last long. Whether it was the "early" morning start that upset her or what I don't know but for every 2 of 5 sun patches we passed on our hack she gave them the old hairy-eyeball. Even spilling and backing away from one particularly terrifying (to her) patch when she had been leading - I will never understand her logic - the silly sod!
All was going well, bar Kika's aversion to sunlight...maybe she's becoming a vampire...anyway we were bang on time to get the Guru home for her 1 o'clock Sunday dinner with her family when we came to the final stretch of trail to get back to the field we came upon a fallen tree right across the path we had taken down a few hours earlier - the path we take every day to and from the trails!
Boy were we lucky we weren't under it and/or anywhere near it when it fell! Hopefully a forester will have had a chance to clear it today so that we can continue our happy hacking.
Unfortunately this meant we had to double back and take the longer tarmac route back to the field, over two hours since we'd put on our suncream at the hottest time of day..what's the saying about "only mad-dogs and English-men go out in the midday sun" - we were very lucky not to get scorched!