A rough step-by-step photo guide of my daily lunchtime escapades to turn out the three horses on my break. Features public transport, power walking & time-limits ... however none of these can be depicted in photos LOL!

My preparations start at 11.50 when I change out of my office clothes (usually heels & dress/skirt) into jeans & my trusty Ariat Windmeres.
At 12 o'clock on the dot I leave my desk and am usually out the front door of the building by 12.02 at the latest (I badge in & out - so I know useless facts like this), I catch the first bus that arrives and get off two stops later to wait for my next bus which arrives at 12.20. When traffic is in my favour I get to my stop by 12.35 - when traffic goes against me it can be closer to 12.50 before I get off Bus #2 - No Bueno!
I then walk the routes marked out below: Teal is going up-hill & Purple (thankfully) downhill

I have a quick turn around in the Stable itself as I stop first at Nancy's door, where she heart-warmingly greets me with a whicker/whiney every day depending on how famished she is *sniggers* 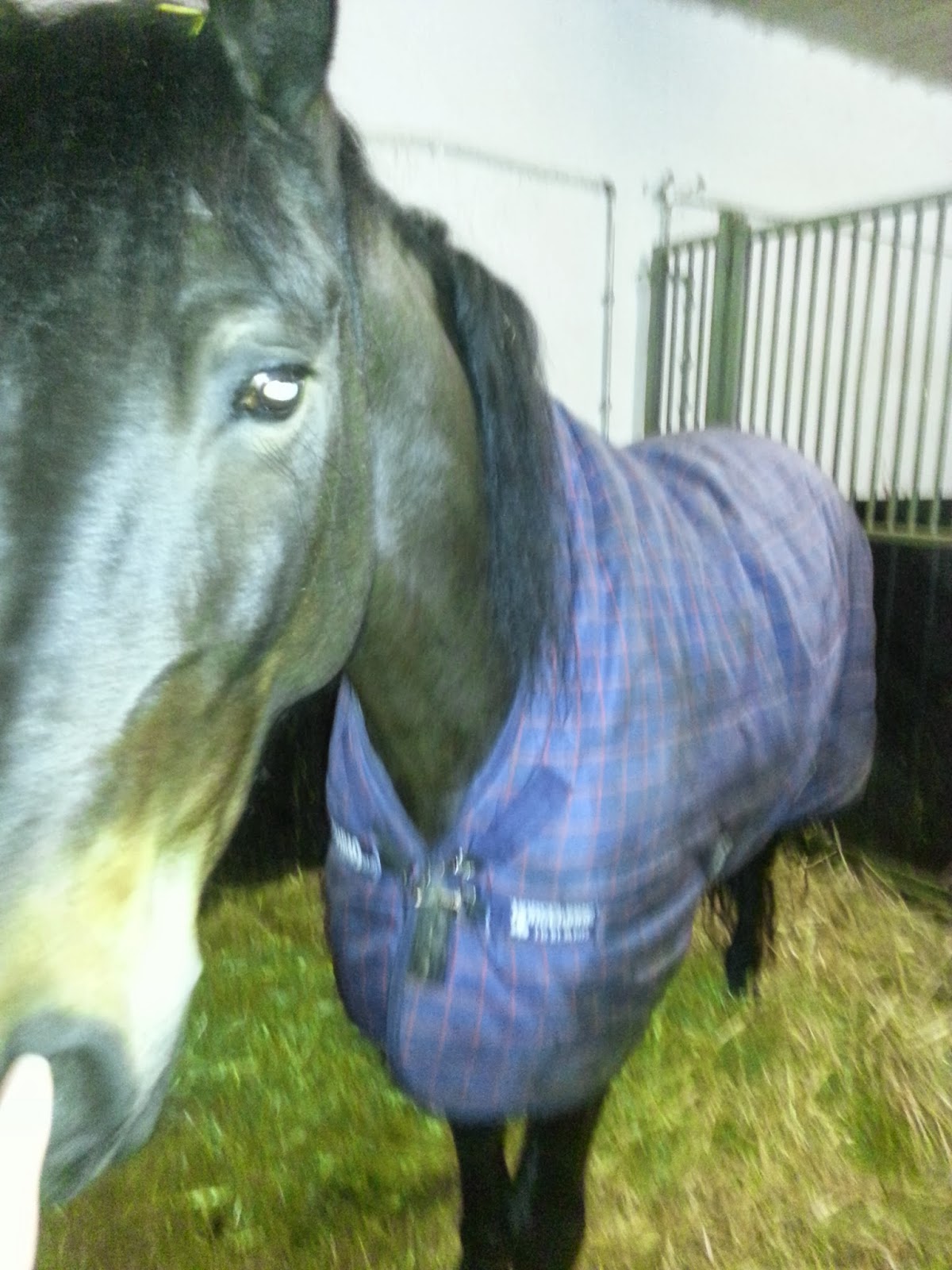 I love her, but she is so difficult to photograph as she is all up in my business & then has such a hurt look on her face when I push her away to try and get a picture where her huge noggin is not the main focus *sigh*

Off topic, but I have to  briefly (*ahem* or as briefly as it is possible for me to share anything in writing) share a cute story from last night. Achieve1dream over at @Equestrian Journey recently shared a really cute story about Chrome, her lovely Friesian X Arab following her around & playing like a puppy dog - her story reminded me so much of Nancy & wouldn't you know she went and provided her own tale of cuteness yesterday evening.
When I got to the yard around 7.30pm L had already brought in and ridden Kika, so her horse O & Nancy were in the turnout area alone. L was schooling another horse for another yard friend so I figured I'd bring both girls in, refill the water and sort the haynets for the following day. (When I get back on track with my Lunchtime Lowdown post you'll better understand why the haynets are filled the night before ;-) )


Nancy was adorable and shadowed me as I collected the three haynets, then stood guard as I refilled them (in a separate area that they cannot access - theoretically although both Nancy & Kika have previously foiled us and gotten in/out via there *knock-on-wood* not for a few months...long may it last. I've had my fill of Horsey Houdini stories) 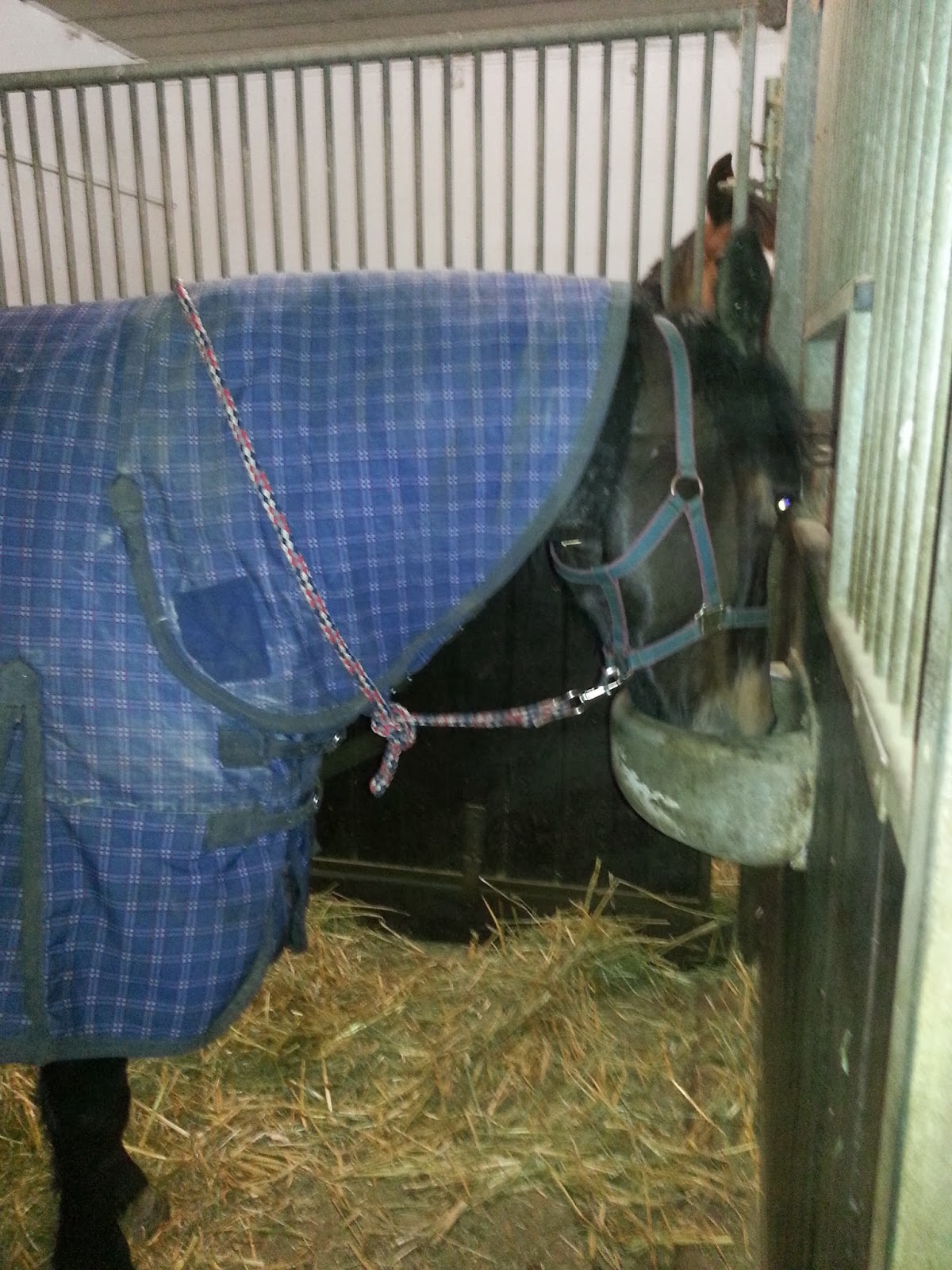 I then popped her lead rope on & O's headcollar + lead rope combo and looped ropes around their neck so that they wouldn't step on them as I hung up the haynets but could catch the pair of them before they'd start eating the hay destined for the following day. Nancy again followed me around like the sweetheart she is - but the most heartwarming bit about this tale...NOT ONCE did she try to eat from the newly filled haynets!!!!

Right sorry for going so far off topic, but it was too cute a story not to share - sadly no photos as it is winter & at 7.30+8pm at night it is too dark for photos & when a flash is used the horses just end up looking like aliens...Not unlike some of the photos in this post, flash was required as all taken inside with poor lighting - hence bugging/alien eyes in some snapshots.


So back to my lunchtime lowdown!

Nancy greets me, I pop into her stall to put on her "coat" outdoor rug on over her stable rug as it is not a heavy turnout and I would hate for the little darlings to be cold. I do up the neck, put on her headcollar, tie up the lead rope as otherwise she plays with it and give her her lunch - 1/2 a scoop of muesli the YO leaves for them in a bucket outside their stalls in the morning.

Then it is Miss Kika's turn, who as I'm sure you can imagine has not been waiting the most patiently, in fact you can spy her mischievous head in the background of the last photo of Nancy (top right). She typically gets yelled at by me multiple times as I sort out Nancy as K kicks the partition with a front foot demanding her turn and/or runs her teeth up any available metal surface...how she has any teeth left in her head is beyond me! What makes it worse is it is totally an attention thing, if anyone else is inw ith any of the surrounding horses she couldn't care less - but the minute she sees me and she isn't receiving the feeding she thinks is her god-given-right she makes a scene. 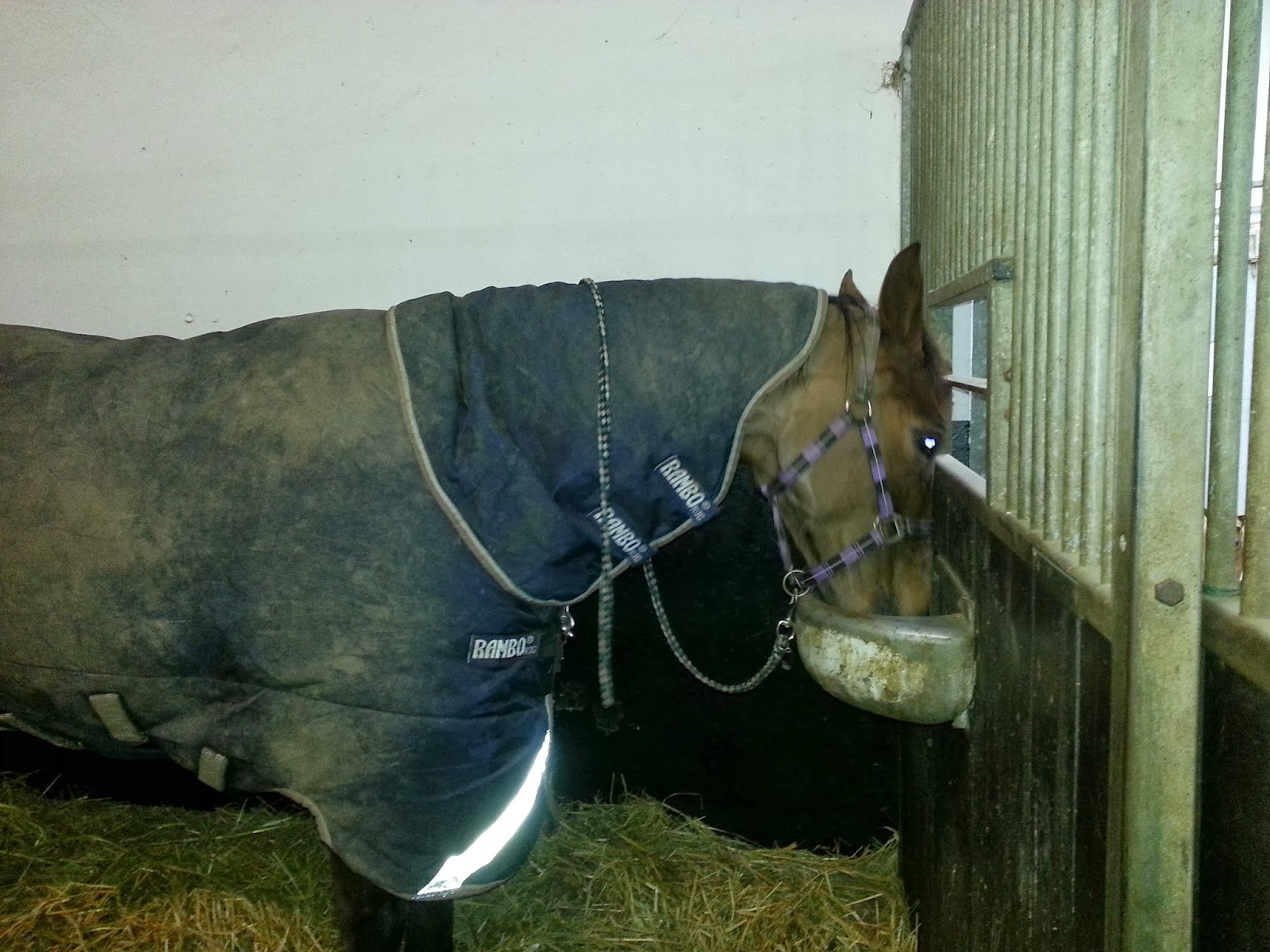 She too gets wrapped up in an outer layer with a hood and once headcollar et al is on she too gets her lunch the same as Nancy.


Oddly, the pair of them take the least amount of time, poor O eats up a good portion of my allocated time in the stable buildings before turnout. As I have to remove her stable protections - she has back on track type boots that go on overnight to help the circulation in her legs as she has navicular in her front feet. :(

O doesn't get an extra rug as she has a stable with a view (window) so L prefers to keep her in a turnout rug day & night, however I do add her neck cover if it is forecast to be particularly cold & or wet.

O is slightly spoiled compared to my girls as I allow her to eat her portion of lunch (a handful of muesli - she's too good a doer & because of navicular L has to try to keep her weight down) while I am handling her - my girls are not even allowed to sniff their hay while I am foostering at them - yes I am a mean mammy!
Although in saying that I spoil O, if she isn't finished with her handful by the time I am ready to take her out, she has to leave it behind as I'm on a time-limit. She then gets tied in the washbay between my girls stalls & the exit to await the arrival of Nancy & Kika. I then manoeuver the three of them out the door and we make our way to the field.
Typically they are locked into their turnout with their haynets & happy as larry before 1pm, so that I power walk back down the hill and usually make the 1.10 bus back towards work.

So there you have my typical lunchbreak during the long winter months, they don't go back out on 24/7 turnout until May 1st. So from November 1st to April 30th, I am lucky enough to get my horsey fix at lunchtime as well as in the evenings! :-D

We'll have to see how long I keep up the walking routine when I get the car I bought before Christmas insured... my daily exercise quota/regime will more than likely have the stuffing knocked out of it. But in saying that, it currently takes me a little over an hour and a half from when I badge out of my office till I badge back in. If/when I drive this run on my lunchbreak - I might be able to squeeze in riding or at least lunging one of them on my lunchbreak and not feel guilty about only being able to ride/work one in the evenings!

I guess we'll have to watch this space
Posted by Aoife at 16:51