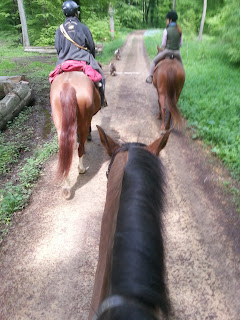 Saturday was our one dry day recently, so myself and two friends took full advantage and went for a 2 hour stroll in the woods. I took Miss Kika, the Guru rode W (a horse she exercises for another livery owner) and another friend AM took the Guru's mare O - so three chestnuts & two bearded collies went out with three jockeys. :)


Kika was in classic Kika mode, and kindly reminded me that no matter how good she can be she can still be a brat when she wants to be! *roll-eyes* 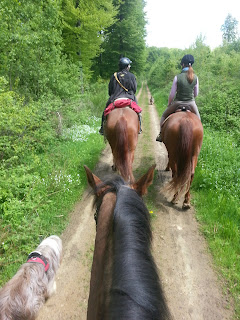 Since our last bout of troubles I had been hand walking her down to the entrance of the forest and mounting off a bench just inside the woods. Slight issue with that was that I had to mount from the wrong side as if Miss Kika turned for home she would start fussing, tossing her head around and threatening to rear when I'd want her to turn around to keep going on our hack. I had originally started waiting to get to the woods to mount so that she wouldn't do her fussing on the tarmac'ed road, as god forbid she would go up and be imbalanced or whatever - I didn't want us crashing down on the road! EEK!

I had been progressively getting up sooner and more-or-less successfully hacking down the road to the forest without any issues - well until this Saturday that is, lol.
All went well with my mounting and we stayed facing the right way so headed off towards the woods without issue - until AM dropped her crop and had to get off O to collect it so we all stopped - Kika did not like this and decided she wasn't going to stand still! We were either going to back to the yard or she was going to really misbehave - stupid sod. So when i turned her around and drove her on towards, poor AM had to hand walk O to the entrance and get up off the bench as the other two times we tried to stop en route to the woods either K or W would start to act the fools! We're going to have to progressively work on working en route stopping into our hacks - she really is unbelievable! 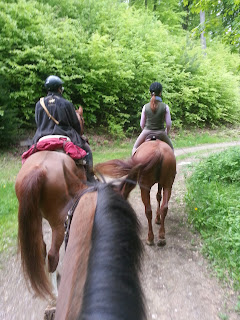 If it isn't one thing, she'll find another way to keep me on my toes - Nancy is the complete opposite. She is only a baby but you can stop as often as you like and in fact stand still without any issue if your hacking partner needs to school some manners into her horse while you are en route home - as happened a few weeks back with the Guru & W as he recognised we were on the homeward trail and kept trying to speed up so he had to do a couple of volts/circles until he got his shiz together and behaved like a grown up. N was an angel and stood quietly out of his way waiting for him to be ready to carry on.

But apart from our inauspicious start to the hack, Kika was a star, including stopping multiple times on our hack without further complaint or issue - she just had a bee in her bonnet at the start of the hack - I don't know if W and herself were giving each other the hairy eyeball and egging the other one on or what they were playing at - but the start of the hack had me thinking it was going to be a bit of nightmare spin. Couldn't have been further from the truth however, as you can see from the photos - she didn't have a care in the world once we got going in the woods, ;-)

I guess it really is all about powering through!


L had asked if she could school Nancy after our hack, as I had to go wedding present shopping for two colleagues I was only too happy to agree. So I sorted out all my winter rugs & saddle pads to be sent off for cleaning, managed to fill 3 black bags, and this is before  have any proper rugs for Nancy, so it's mostly Kika's winter wardrobe - woopsy!! 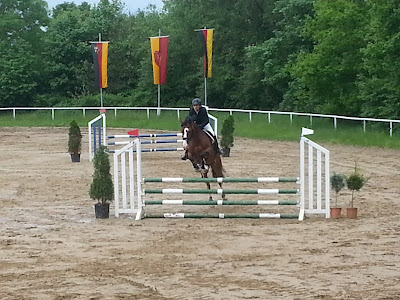 Sunday morning was spent with another yard friend who was show jumping just across the border in Germany - I went along to play groom & general supporter & friend. I had a great time, but think we got the best of the weather in the morning. The heavens opened just as we were leaving about 3pm and by the time we got back to Lux, the Guru had text to say the horses were a washout in their field. So I haven't sat on either girl since Saturday as it's been pretty wet here so I've left well enough alone outside. I am possibly a terrible owner in that I'd rather leave them outside in the rain, then bring them in, dry them off work them and then toss them back out into the rain. I know I shouldn't attach human emotions to animals as they don't "think" in the same way as we do, but i hate getting wet, then dry then wet again - I would rather just stay wet if that's the case! But maybe I'm weird ;-)

Had hoped to get to the yard Tuesday evening, but then my friend who is getting married this coming Friday asked if a few of us could meet last night before she was off work for the rest of the week - so that combined with more rain all day sealed the girls deal in not seeing me last night either!
Shame On me! :(
Will hopefully get out to them this evening and perhaps give Kika a bit of a jump and lunge Nancy in the pessoa, as the Guru advised that i should try to work her with it at least once a week if not twice...haven't managed to do her twice a week yet, but we'll see how we go...Tomorrow evening will probably be another non-barn day as another friend has asked to go for dinner & I really don't see her often enough. Farrier is hopeful of being out either Friday or Monday - so that'll also affect who gets ridden & what we do - also have to decide whether I am going to put front shoes on Nancy ahead of our move off-site & forestry hacking for next few months...I need to discuss with the blacksmith when he comes. :D

Yikes sorry, this post is after getting mamoth-length again, apologies! I'll leave you with a funny video/song from youtube's Comedy Week that I heard them talking about on the radio this morning.