Gosh where has the time gone again?! Sorry for the recent radio silence guys work has been mental and the weather has been pretty awful. With horses living on 24/7 turnout in the rain we've been having, they have been spending a lot of time stewing in the field.

That photo was taken Friday afternoon as I raced against time to haul the two muck monsters in to have a hope of getting a spin in on them before the got soaked in another shower. The weather has been mental here for the time of year - I mean it is the end of May and last Friday it was -1C when I woke up!
The girls, have of course been taking full advantage of their field being like a pig sty - and covering every inch of themselves in mud at every opportunity. I only managed to ride Kika on Wednesday evening for a jump school and Nancy "only" got a 2 hour hack on Saturday evening. Oh, and Friday I did managed to squeeze in a spin on the pair of them - apart from that they have been spending a lot of time rolling in mud! 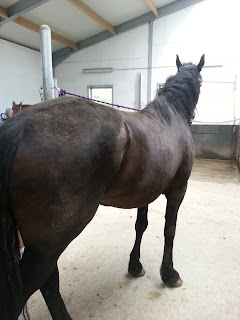 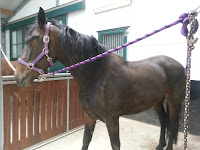 I did make a paint attempt at last week's jump school with Kika, but as it has been over a week since I rode it I am afraid that i have forgotten the courses The Guru had us string together. However Kika was awesome considering she hadn't been ridden since the Saturday, when we'd been on a 2 hour hack. Our issue during the jump school was mine in that I couldn't feel when she was on the wrong lead - but we shall work on this for the summer. 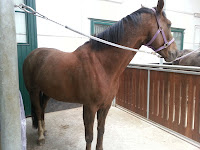 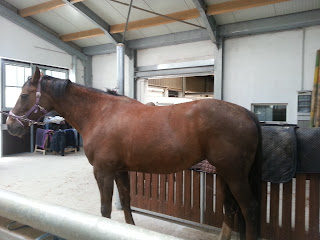 
I had two lovely spins on Friday after cleaning all that muck off the pair of them, as the skies were so threatening (see first picture) I hauled the pair of them in at the same time, cleaned them up and popped Kika on the walker for 20-25minutes while I rode Nancy in an arena. We still have our speeding issues, so I have decided that I am no longer going to ride her in an arena on my own as I still can't figure out where I am going wrong, so have asked the Guru to help me out with arena work when she can - on the upside we have no problems out hacking. Nancy is rock solid and such a joy to hack on!

Nancy then got to munch on carrots while i gave Kika a spin in an arena, she was a doll. Still threw in the odd Kika "Oh-that-corner-is-suddenly-scary", but she worked like a charm and we got all our canter leads right. Another yard friend passed as I was cantering and she stopped to kindly tell me that she was going really well - and that she wished her horse could canter as uphill as Kika was going. I hadn't realised that we looked anything special, but while I had her I asked if she would mind watching a few more minutes to be sure I was getting the correct leads - which thankfully we did.
I was so happy, I did offer her a spin on Miss Kika if she wanted as she has been so good these last few months (bar her hacking sillies - but they don't count! :p) - however I think I was too honest in talking to this friend about my previous Kika issues as she has no interest in sitting on her - woopsy! ;-) 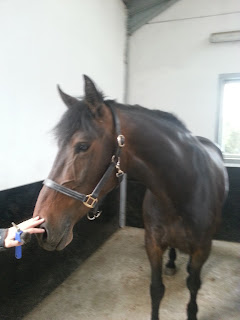 I found the above leather headcollar in my stuff that I brought over from Ireland around the time Kika moved out here 3 years ago. I had actually forgotten i had it which is very embarrassing as a very kind person sent it to me for free from a forum pay it forward kindness thing after she'd won it and wasn't planning on using it.
It always looked a bit blocky on Kika's finer head - and I was actually apprehensive about it being too small for Nancy's monster head - but in my biased opinion, I think it loos fab on her! 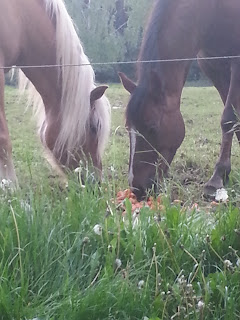 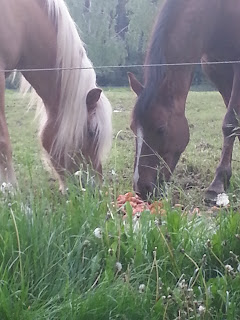 Saturday was actually Kika's 9th birthday so she got a mountain of birthday carrots. Which she surprisingly shared with field-buddy D. She really has matured so much, I can honestly say i didn't think she'd consent to sharing!


Monday the farrier came and both girls got front shoes. I decided to put front shoes back on Nancy as in 3 to 4 weeks time I'll be moving them to another field off-site which will only have access to forestry hacking - and I want to look after her feet as otherwise they'll get too worn down on the trails.
Shamefully I haven't made it to the yard since Monday evening, but hope is to get there tonight and remind my girls what I look like ;-)
Posted by Aoife at 10:52