Thankfully I did get to the yard both Thursday & Friday evening, however I was unable to ride or work either girl through no fault of theirs - more lack of time on my part after a mental working week. Both girls got spoiled rotten with carrots though, so to be honest I don't think they felt in any way short changed! :p


Poor Nancy has had a rough couple of weeks with all the rain we've had and unfortunately is looking a little under the weather (no pun intended) herself as she has lost too much weight through lack of grass growth in their field. Her carrot intake has been increased and she is back on hard feed in the evenings, whether she works or not - I have also made arrangements with the YO so that I can put her in an empty stable in for 30-45mins, the time I work with Kika, to allow Nancy have her fill of hay. Fingers crossed she starts to fill out again :-/


Besides being a little tucked up looking - she is in good form in herself and we had a lovely stroll in the woods today - but that is for tomorrow's update.
Today is about Kika & my mini-lesson Saturday. 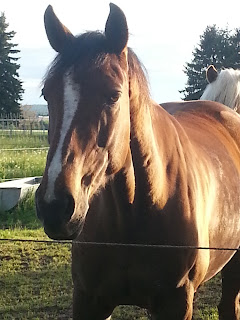 Miss Kika was an absolute superstar on Saturday evening, I hopped up on her after not having ridden her since the previous Friday and we got straight down to work with some lovely trot work - I was actually waiting for the other shoe to drop and for her to pull something out of her bag of tricks to test me, but besides almost snotting herself through partial inattention in our first downwards transition from trot to walk she didn't put a foot wrong.
The Guru joined us soon after I started and watched us trot circles offering advice as I worked, mostly getting me to slow my rising yet keeping her tempo without allowing her to speed up - thus lengthening her stride. I have to be careful to stop niggling at her sides and keep my legs steadier as she no longer needs encouragement (read:nagging) every stride to keep her moving forward.
We worked on walk/trot transitions, no further tripping involved you'll be glad to hear, :-) I was glad in any case! With some random halts requested also, halts can be a touchy subject for Kika in that halt to her means stop working so we can lose our shape when halting as she stretches her neck and typically tries to get herself some more reins - however we had engaged our working mentalities and didn't have this happen in our halts - or at least I don't think we did.
We calmly moved up to canter transitions, getting our correct lead each time, I asked for her to pick up the canter on a circle, continued the circle at canter then went long before circling again at the other end of the arena maintaining our canter before transitioning back to trot while getting straight after her in trot upon transitioning downwards to become soft and striding in a relaxed way.
L then said to canter as if circling but changing my circle across the center and to ask for a flying change in the same way as we had twice before worked over a ground pole. Changing right to left we nailed it first time and continued our circle in the other half of the arena without a problem - I was then asked to repeat the exercise going the other way but I didn't manage to get the change. Came back to soft trot then walk, changed the rein back and asked K to pick up canter from the walk - something we haven't done much of either but are working on, she very kindly & calmly did as asked, I re-stared my circle and changed across the middle getting the flying change right this time. I was so proud of myself as I could feel myself riding it correctly & asking for it correctly - I did have to imagine we were going over a ground pole so that I would do it right - but whatever gets the job done...I am happy to play mind games with myself if that is what it takes! :-)

L wasn't finished with us yet, however, so she had us return to some lateral work - which K & I had only touched upon together in the past...however whenever L rides K she works on it with her so Kika is better versed in it then I am - which is all for the best as I am just learning this "fancy" dressage dancing as I like to think of it, ;-)
She had us start from a volt and continue along the long-side of the arena going from left to right first. Kika is a master at avoiding hard work, but I really could feel her step under herself/cross her legs when we got it right. Once we got it right from the volt a couple of times, the Guru then had us come up the center line and repeat the exercise without starting from a volt to get us going.
We then trotted for a bit to loosen K back up with some big circles before changing the rein and attacking the other side - Kika's less favourable side moving from right to left. It took us longer to get it right going this way as Kika tried to throw the toys out of the pram a couple of times in her avoidance of what was being asked - she really does like to test the boundaries to see if she can not do what is being asked of her.
I did require a pause to check exactly what I was supposed to be asking of her, not the aids as those had been explained to me - but exactly what type of movement I was asking off her so that I could be sure that what I was doing was right.
Turns out we'd been working on shoulder-ins, once I got that straightened out in my mind I found it easier to focus on my aids now that I knew she was supposed to keep moving forwards and not side-ways ... sorry I am probably not making sense here - but it was an epiphany which helped me get it right on our bad side before we did some more trotting to help her stretch out after the good efforts of the evening and we called it quits. :-D
I had such a fantastic lesson and took many positives from it, not least that we have made improvements & managed not to slide into any new bad habits while working on our own. Fingers crossed we can keep up the good work and hopefully transfer some of my relaxed'ness from Kika to Nancy when I work her in an arena - if you've been reading my blog from the start ... did you think we'd get to this day where K and I can be singing off teh same hymn sheet?
I'll hold my hands up and admit - I sure didn't!
Posted by Aoife at 23:43