The "BIG" move happened on Saturday - The Guru, her two dogs, the three horses & I moved the horses from their field at the yard to an off-site field 2 communes (villages) away by hacking in convoy through the woods.
All animals & humans arrived safely after crossing a road & a river - we even entertained a village fête that was taking place by the river crossing - thankfully all girls behaved impeccably even though they hadn't been to that river crossing before - could have been a recipe for disaster!

Photos & video of the girls having fun stretching their legs in the new field to follow!

Next the girls grazing as we sorted electric fencing inside the perimeter of the field & farmer's fencing is barbed wire & we don't want them getting too close! :-/ 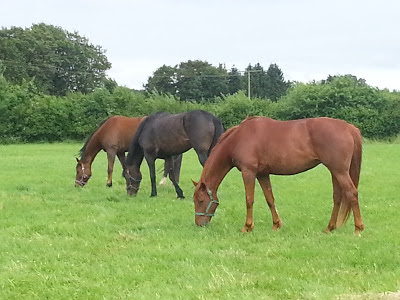 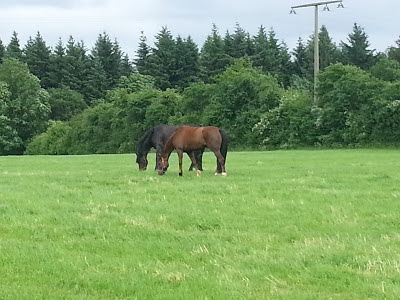 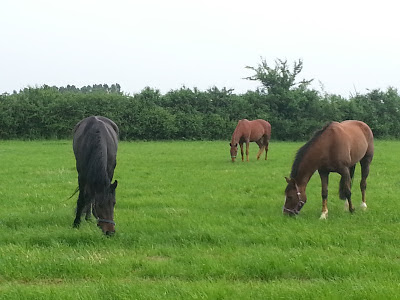 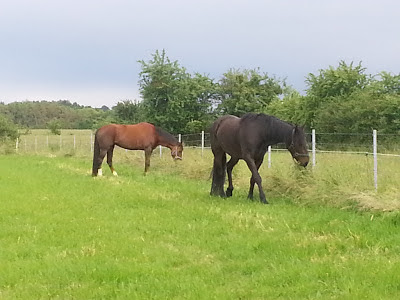 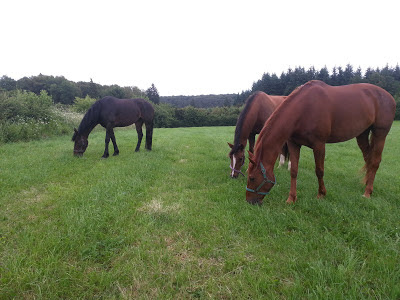 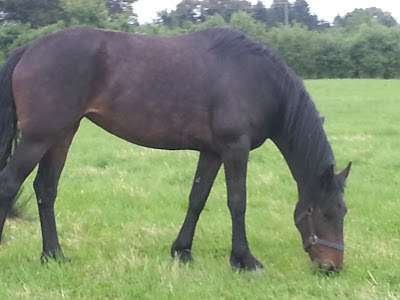 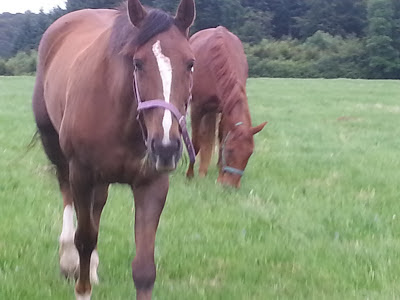 Nancy has been having a ball for herself racing around the field - the other two join in, but you can deff see who is having the most fun in the video - Kika is most unimpressed with all the running, hahaha!


It's heartwarming to see "little" Nancy stretching her legs, it's the first time I've really seen her let her hair down and act like the young horse she is :). 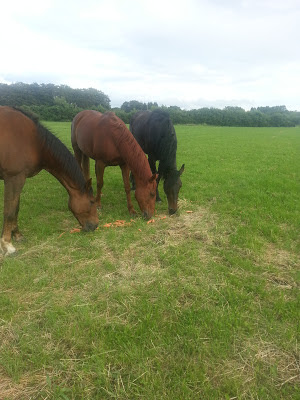 I also got two lovely arena spins in on Kika before we left, one on Friday evening and the second Saturday prior to departure. She was fanatastic on both occasions - we even got a flying lead change on our own! What a way to sign off from arena work for a while! :)
We will have access to the arenas if we hack back to them, L reckons we can get from current field to yard in 15-20mins. we took long route on Saturday as we had dogs loose and K on leash so we crossed the rode rather than ride along it which would have taken less time.
Once I get the lay of the land over that side of the woods I'm sure I'll make my way back for some arena work at some stage over the next few months. We're hoping to stay at this off-site field until mid to late September, whereupon the evenings will get dark too early to allow us hacking after work so we'll have to come back to the yard for final month of turnout before horses go back "in" from November 1st.
We had hoped to go for a hack in the woods yesterday (Sunday) afternoon, unfortunately weather had other ideas and every half hour - 45mins a heavy shower would fall and undoubtedly soak the ponies so we had no chance to throw tack on the girls to go for a jaunt. However I did get a spin on a cute arab horse when I stopped into the yard as her owner has a bad back and can't canter her, so she asked did I fancy a spin - she was a gem! First horse I've ridden that isn't mine at the yard!
Posted by Aoife at 09:25