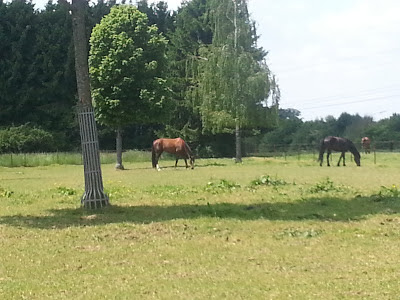 We had a lovely sunny Saturday - however it rained all day yesterday & has started today in much the same wet vein, fingers crossed it dries out so that I can have a spin this evening! :)

I arrived at the stable shortly after 1pm as I'd spoken to the blacksmith in the morning and he hoped to pop by about 4pm to put the shoe back on Nancy. So I want to have them both in, give Nancy hay and ride Kika while the main arena was quiet. It all went to plan, bar the arrival of the farrier - but whatevs!
Popped Nancy in an empty stable and gave her a healthy helping of hay as I am still encouraging her to regain the weight lost in the poor weather the week before last. Tied Kika outside to groom her in the sunshine, thankfully mud-bath that was their field was after drying out and she was no longer a muck monster. 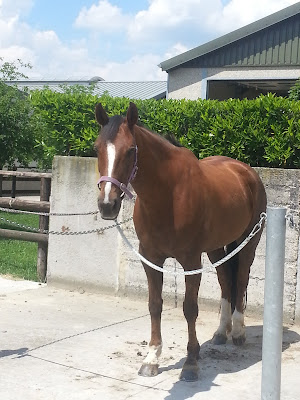 As it was such a glorious day & I was kind of time-wasting I decided to plait up Kika's mane so that her neck might'nt get too sweaty as I had it in mind that we were going to really work our canter and knew how stuffy the indoor would be with the lovely heat outside. 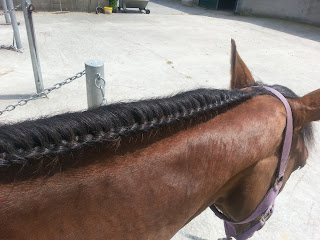 I needed to ride indoor so that i could use the full wall of mirrors to my advantage and it was too hot for me to ride outside with my fair skin I'd have been scorched! Lobster red is not a good look for me & it is very bad for my skin, so lathered in suncream I managed to avoid getting burnt. *Happy Days*


With the lovely sunshine & heat I didn't want the little darling over-heating or dehydrating so I had a bucket of water to allow her some drinking while I groomed & before we set to work.

I finally managed to snap a photo of her trick of sticking out her tongue and holding the water in her mouth before swallowing. That made me silly-ly happy!

I had such a great spin and got to work on all the things I had hoped to tackle with the arena & all the mirrors to myself - it was wonderful!
We warmed up with lovely smooth trot with circles, figures of eight & w/t/h transitions - lots of transitions. :-)
We then moved up to canter work, where I really concentrated on gathering her together on a circle and keeping it closed down the longside before circling again at the other end of the arena and asking her to really open her canter back up the longside on each rein. We then did some c/t transitions before working on some shoulder-in in the walk - followed by some loose flowy trot to stretch out again. Back up to canter work where I worked on smaller circles, really trying to concentrate on correctly turning with my outside rein/inside leg, before going back to trot and letting her really stretch as she'd earned it.
As we were both quite warm, we went for a stroll around the property on a loose rein - this would not have been possible 12 months ago. We have really made so much progress, it is such a joy to ride her now! *dance*

After a shower and some feeding she & Nancy were turned back out, I had hoped to bring them back in for the farrier as he was due to pass in the early evening, but unfortunately I didn't hear from him so still no shoe for Nancy...but to be honest i don't think she's too upset over not being worked and getting stuffed with food while Kika gets ridden, :p 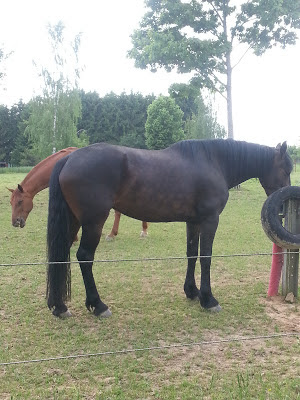 I know I am biased, but I think Nancy is filling out again nicely after her weight-loss at the end of May! 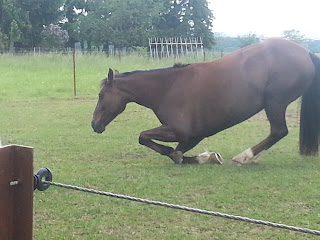 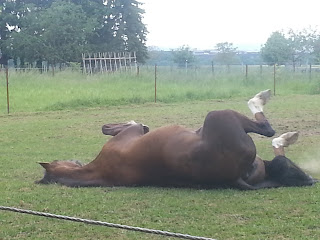 Kika then decided that a roll was definitely needed! ;-)

We had hoped to go for a hack in the woods on Sunday, however rain put a stop to that. Supposed to dry up this evening so hoping to get a spin in on Kika tonight and if I can contact the farrier, I'm hoping to get an answer as to when he can put the shoe back on Nancy.
Fingers crossed!
Posted by Aoife at 09:37