Had a great day today, managed to get fencing sorted around turnout area and was able to get Kika back outside and keep her away from our hay supplies. Photos to follow of the inquisitive madam in all her glory (they'll be interspersed throughout this blog post).


I got another battery operated fencer yesterday afternoon, specifically with Kika in mind. Bought a 12volt battery that should cater to up to 20kms of fencing!
Here's hoping that'll keep her out of mischief!


L and I hooked it up today to the longer side of the fencing which goes around 3 sides of our turnout area with current on three strands. We then hooked up L's battery operated fencer to the front of the turnout area and the 3 strands with handles that act as a gate into the field - not connected to the other battery powered fencing...I'm nit sure I'm making sense - but we tested the charge around the whole field and we know have full power everywhere we have current, whereas before we only had max 2 bars (we're now up to 6) on our counter/measurer thing.
As you'll see from the photos Kika followed us around the perimeter as we tested the wire to make sure to snoop out any gaps if we left any.
Sorry Kiks! We're on to you and hope you cannot find a way around this set up!

Left her there after filling up the water bucket with some hay, her buddy O (L's horse) and the two neighbouring ponies, one of which can be seen in the background of the above photo. When we came back 3 hours later she was still where we left her and not in with the Hay!
HAPPY DANCE!
I call this a victory for team Humans!

When we brought them in and turned off the two fencers so as to save the batteries, we set up trotting poles and L gave myself and another yard friend (N) a lesson over poles with some cross poles thrown in as the lesson went on.
Kika was a star! I'm afraid I have no pics to share, but I have had another quick play in Paint and produced a poor replica of the layout of the poles. 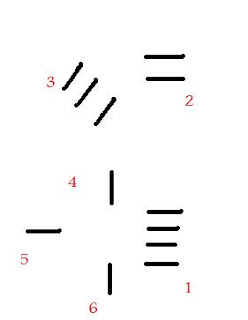 We stared out on a circle over 4, 5 & 6 twice on each rein in turn. N then myself & Kika. We then did 4, 5 & 6 then up the diagonal over 3 to change rein. Followed by 4 & 5, up the four poles at 1 and straight on to the two poles at 2.
The four poles at 1 were then made into uneven cavaletti (I think is the best way I can describe it) with alternating ends of each pole being raised slightly on one side; which we rode through putting different combinations together - sorry afraid I can't remember which way we went through them!
3 was then changed into a pole leading to a cross pole, which we started with in the following combination. 4 then 5 up through the jagged cavaletti at 1, left handed over the cross pole back to trot rightanded down 2 back through the cavaletti at 1 and righthanded again over the trotting pole at 6.

We ended with a pole and cross pole being made at 5 & 1 and 6 being removed. Our final course was down 2, lefthanded turn over 4, left again to the cross pole at 5, up over the cross pole at 1 straight on to the two poles at 2 and left handed down over the cross pole at 3.
There were many more combinations of going through the poles that we also did, we ended up jumping every pole from each direction a couple of times - but we did so many variations that I can't remember what they all were now!
Apologies also for my poor artisitic skills with paint!

In Nancy News, I heard from the Transporter she has arrived safely in Calais (France), has been drinking and was happily chowing down on some hay. He has a drop off to do at 8.45am in France (I think) and will be on the road 4 hours then to get Miss Nancy to me here in Luxembourg for around 1pm - which works out perfectly for me as I prefer to work the morning and then have the afternoon to make sure she gets well settled in.

I also have the vet coming for Miss Kika for a bloodtest to check how her liver is doing as we've almost reached the end of our current batch of supplements, to check her teeth and possibly do her annual vaccines although they might have to wait till Feb as that's when we did them last year...we shall see what the vet says. Might also have her give a quick once over to Nancy to make sure nothing went awry in transit and that she hasn't picked up any bugs or germs from other horses!

That's all my news from today - hope to have another update for ye tomorrow full of Nancy pictures and of course more Kika pictures all going well with both of them!