I am such a nervous nelly today!

Nancy left the only home she has ever known this morning and started her journey across land & sea to come join Kika and myself out here. The plan is she will arrive here on Monday, but it's snowing here and apparently weather forecast wasn't good for the UK so whether ferries will be running & roads will be cleared is anyone's guess! :-/
Transporter hoped to be in Calais (France) by about midday tomorrow and will be in a better position then to tell me when he hopes to arrive in Luxembourg with her on Monday - all going well!
I could only get a half day off work for Monday - but couldn't tell them which half of the day I'd be in for. Obviously I'd rather work for the morning and have the mare arrive in the afternoon so that I can be sure she settles in all right and everything goes smoothly - whereas if she arrives in the morning and i've to go in for the afternoon things could be rushed and I might miss something!

All in all I am just a bundle of nerves as besides the weather and maritime issues I am just so worried about her travelling after Kika travelled so badly when she made the same journey almost 3 years ago!
I don't often look at the following photos as they upset me so much, but they might help those reading understand some bit why I am such a worry wart over Nancy travelling! 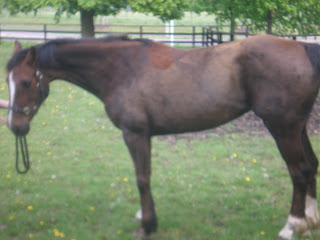 In Kika news, and to put a positive spin on my otherwise worrisome post - I had a wonderful spin last night. Got to the yard earlier than I typically do as I only work until 4pm on Fridays. Popped Kika on the walker while i sorted out her stable, she has a terrible habit of pushing all her straw to the back of her stable and leaving a whole in the middle - where if I didn't re-bed her down every evening she'd end up sleeping on the concrete. One of my yard friends always laughs when she sees the state of K's stable and reckons she's trying to dig her way to China or something to escape. Hahaha - I must actually look into getting rubber mats put down - shall have to start saving methinks!

Will try to keep this brief - will probably fail...but the intention is there!

Tacked up and rode in the main arena with the wall of mirrors (see previous post with photos of Quadrille displays) so that I could keep a better eye on myself, my position in the saddle and check that I was on the right diagonal when trotting -  am terrible and can't always tell if I am right or wrong...usually wrong! *blush*
We went through our paces, walk, trot & canter - got some lovely smooth, calm, controlled and balanced canter work! *HAPPY DANCE*
Plenty changes of rein, serpentines, circles , volts and figures of eight to keep everything interesting and finished up with the biggest smile on my face - everything just clicked!

I didn't ride today - I offered L (The Guru) a spin on Kika as her mare has unfortunately come down lame again, not sure what she's after doing to herself - but L was understandably getting low spirits as it seems to be one thing after the other at the moment with her mare and lameness :-(
I was a little apprehensive about Kika's response to potentially being asked to do more work than I typically ask her and half afraid that I had jinxed things by singing her praises after our last few spins - but I needn't have worried.
Kika was a superstar, she gave L a wonderful spin!
*Proud-Mommy-Moment*
L was all smiles when she finished, she said that Kika was moving much better since we put the shoes back on, taking longer strides (which is something we'd been working on in lessons & on the lunge) and that she was markedly less inclined to toss her head about the place complaining about having to work. She said that she was a lot more relaxed in her work and tracking up well in trot - all good news!

Plan is to do some pole work tomorrow under L's supervision and possibly pop a few fences depending on how things are going! :-D
I don't think we'll be able to jump Wednesday evenings anymore as the yard lessons are running later and later so we can't get the use of the course after them. Plan is now to just set up our on on weekends when we all have the time, L, myself and another yard friend N.

Hope to have another update for you tomorrow evening after our lesson and fingers crossed the news that Nancy has made it to France!
Which reminds me of an infamous Irish add for butter - but it's all about taking the horse to France! It was all my friends in Ireland's favourite question when I told them I was buying a horse back in 2007.


Having not grown up in Ireland, the context of this add is lost on me - but Irish people love quoting it. I think there were even t-shirts made with the slogan "Who's Taking The Horse to France"...It's all rather lost on my though I'm afraid, perhaps someone might explain it to me some time....
I was always very confused at first when all my uni friends kept asking me "Who's taking the horse to France?"  - as I'd rather hoped that after my repeatedly telling them for 3years that Luxembourg was it's own country they might have remembered - turned out the joke was on me as I'd never seen the add!
Posted by Aoife at 00:21