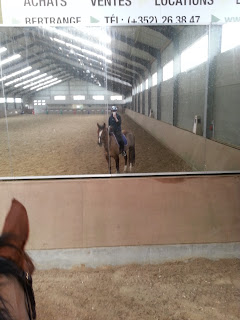 As you can see from the pic, all is well again in Kika's Kingdom - or at least it is from my point of view as we had our first proper spin yesterday since the week before Christmas!
Happy Dance!

But that is jumping to the end slightly, the weekend started with a half day on Friday - thank you work! Ran around trying to do things that I normally can't get done on the weekend as typically banks etc have the same opening hours as my working hours so usually I can't get there during the week - I also got to collect my phone from the shop with it's new screen which set me back more than I'd originally paid for the phone as I got it on promo ... yet less than buying the same phone on it's own or trying to get out of my contract. So all in all a good Friday afternoon.

I made a mad dash to the yard to lunge Kika (she made many attempts to snot herself by throwing herself into the air and not paying attention to where her feet were going to land), shake up her stable, give her some hay and her feed + supplement before mad dash back to town to go to the cinema - highly recommend the Perks of Being a Wallflower if you haven't already seen it! Started the book before I went and haven't quite finished yet, really enjoying the book and quite enjoyed the film as well.
Thumbs up from me! :-)

Saturday woke early to head to town for an overdue hair appointment at 10am. Then spent the afternoon and early evening clearing the remaining branches & bits of wood etc from the field so that we could finish fencing around the hay storage area and hopefully *hopefully* keep Horsey Houdini out of there yet in the field! She really is an escape artist, phew!
Got back to the yard, tacked herself up and gave her a bit of a lunge before I hoped up for a bit of a walk to cool her out as my back still wasn't 100% right but heaps better then it had been on Thursday! She had her fun on the lunge, including a nicely timed tail in the air, snorting dragon impersination after a pony left the arena we were using. She really is an awful messer as she had been fine before that, not paying the slightest bit of attention to the pony who had been being ridden around where she was circling on the lunge nor the horse that was being silly on the lunge in the upper half of the arena. So Kika really was just seizing the opportunity to act the hound. Can't complain though as she did settle back down and lunge away with a few more pucks, plunging and general Kika messing for the rest of the lunging session - better she do it on the lunge then with me on her back especially as my back wasn't great haha ;-)

Anyway I hopped up as another person came to lunge and someone else came to ride (the other lunging livery had vacated the arena at this stage or else it would have been a very tight squeeze), we walked around a bit, she & I felt good so I chanced a sneaky bit of trot on each rein. All went well with her and my back, so we finished up and i finished cooling her out before quickly doing stable, hay, feed & running home for 7.30 to turn around and catch 7.50 bus to town to be only 10mins late for my friends birthday dinner at 8pm!

Sunday was a great day, got to the yard which was a flurry of activity as there was to be a yard event that afternoon with Quadrille demonstrations from liveries & the Riding School Kiddies (photos to follow :-) ) - so popped Kika on the walker for a few minutes while I gathered her gear. Saw a gap in the main arena where the displays would be on later and threw the tack on her to walk her around as one person finished up and another was riding. Hopped up without lunging, once she settled and realised that the fences at the end of the arena weren't going to eat her. The plan was to work on walk/trot work to see (a) how she was after having been lame & with her new shoes and (b) how my back help up after it's tweaking earlier in the week. Apart from one stumble where she jolted me slightly all went really well, even her half-hearted attempt to take off/leap/bronc across the arena after God only knows what startled her from our serpentine - however she settled right back down and continued our work happy out. We even braved some cantering and got some very nice calm, rounded work - even if I do say so myself!

Cooled down, snapped the two pics then let her loose in another arena for a roll, cleaned her up and left her tied in her fleece to stay cozy while I sorted her stable, before popping her back into her cozy fluffed stable with some carrots 6 hay to keep her out of mischief. I then made a nuisance of myself catching up with other yard friends as we waited for the Quadrilles to start. 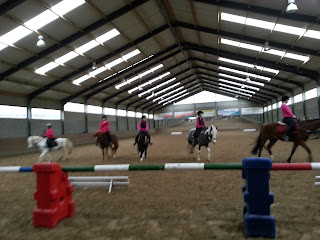 First up were some RS kids - you'll notice the overriding theme for the day was PINK *shudder*
I'm all for purple, but I am afraid I am just never going to make a 'Mean Girls' Plastic as I can't stand pink!
The Yard Owners went all out and provided free cakes, buns & homemade treats as well as hot chocolates, coffee & gluwein (alcoholic & non-), so they really laid out a fine spread with something for everyone. I have to say the cakes were really tasty & I was very pleasantly surprised to find out they were laid on for free - BONUS!

Next up were a collection of fellow liveries who with the Resident Riding Instructor (not the same teacher as the RS) had put together a 4 minute long program! no mean feat considering the amount of them that participated in this display, yikes! 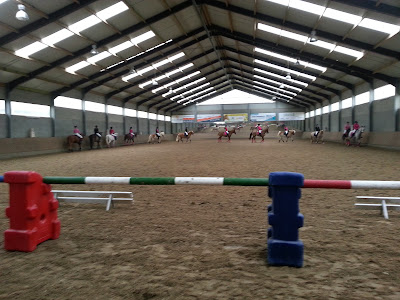 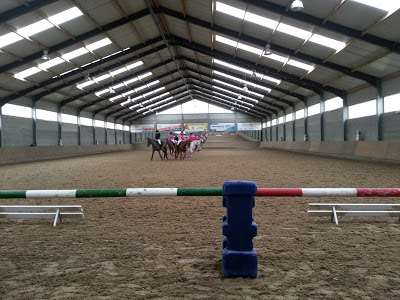 And then lastly there was another RS class display where all the kids were dressed as Pippy Longstockings! Down to the monkey backpacks and pigtails - they all looked fab, unfortunately I am not sure how well my phone camera was able to capture them. :-/ 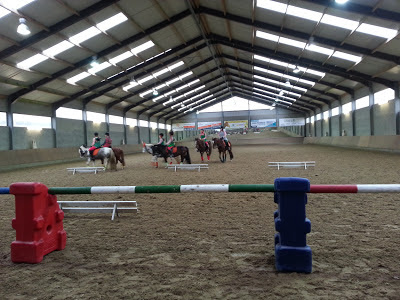 After the displays, L and I went to fence the field. We took K with us as we figured she couldn't get into too much trouble while we were there...WRONG!
I really don't know why she can't recognise that we do the best we can for her and try to keep her best interests at heart - it is such a pity that she won't do the same for herself *rolls-eyes*
So she did her usual farting, bucking, running & tossing herself about the place like a mad thing - understandable as she hasn't been out in over a month. But why she felt the need to greet the neighbouring horse by waving at them with her front paw only to get it caught in the middle strand of the electrified wire around their field is beyond me! *le sigh*
I reckon she got a nice, obviously timely reminder that white tape is electrified and didn't appear to have done herself any damage, thankfully! Another thing to be thankful for was that she was then more wary of the wire we were working with as we fenced off around the hay. We found a mesh type wire with rectangular/squares which we have used to fence off where she was going under the wire to get at the hay and will put white tape about 50cms infront of that and run current through it - hopefully that will keep her out of our hay stores!!
I am going to buy a second fencer at the weekend, we are going to run one fencer on the middle strand of wire and a separate fencer for the lower strand of wire, as she was getting under the strands. We'll leave the upper strand without for now and hope for the best. As otherwise with three strands and a loop around the hay storage there is just too much for one battery to power. Once we have everything up and power where we want she can finally start going back out - talk about making extra work for us!

Finally before I sign off with this monstrous update, we have time for some Nancy News:

She should be being collected from the yard in Ireland by the end of this week and arrive in Luxembourg on Monday 14th. We were given the green light by the transporters to get the vet to draw to the EU Health Cert so that she can get through the ports etc - once that is made she has to move between 3 & 10 days (I think have heard different things) - so she'll be with me real soon!
HAPPY DANCE!
Posted by Aoife at 11:21