I'm not sure my girls will be fast friends - the jury is currently out on that count. 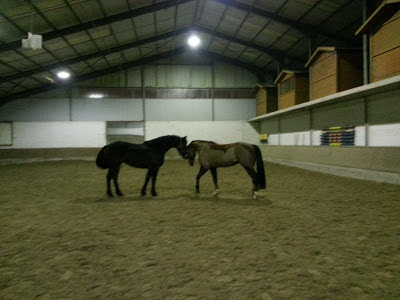 I was pleasantly surprised by Kika's reaction to Nancy, I actually think she may remember and/or recognise her from when they were in Ireland - although Nancy would have been a foal/yearling when Kika left so they wouldn't have actually been turned out together or come into direct contact with each other per se.
However Kika is very maternal and loves foals and animals smaller than herself in general - she will make a great mother some day - if I ever get her to that stage!

Kika actually got an eyeful of Nancy yesterday evening when the haflinger stabled between them was out of the stall and to see Kika stare ears pricked at Nancy was adorable for me. Maternal Kika may be making a reappearance!

I was apprehensive about turning them out together as I thought Kika might be aggressive and nasty towards Nancy, but I couldn't have been more wrong!
She was an angel and really interested in saying hi and playing nice with Nancy, however N wanted none of it and wasn't too interested in befriending Kika!


Nancy def has a mind of her own and won't let herself be bullied or intimidated - I noticed this when I was in the stable with her earlier and the neighbour was making faces at her through the bars. Nancy gave as good as she got, so she won't be a push over which is reassuring as Miss Kika can also stand her ground and knows her own mind.


Prior to the "Grand Introduction", I had popped Kika on the walker for an hour while I sorted her stable and gave Nancy a bit of lunge on the line and loose so that she could stretch her legs a bit after the traveling and learn the lay of the land. I only asked her to walk and trot a little bit, so long as she wanted to trot, to let her work out the kinks.

She was very good, tends to look out when on the lunge so we'll work on correcting that sooner rather than later so that the wrong muscles don't develop. L has said she has quite a neck so we'll have to be careful that she muscles correctly as otherwise it'll be very difficult to  correct later.
She's still very young so we'll take things slowly and try not overwhelm or push too hard too fast but at the same time we want to set up a schedule/regularity to work so that she doesn't get used to the easy life and then get a shock to the system when we look to start working her more often - lesson #1 learned from Kika's younger days.

As always with young animals consistency is key - I may need to be reminded of this and "1 step forward can be followed by 3 steps back" in the future. ;-) 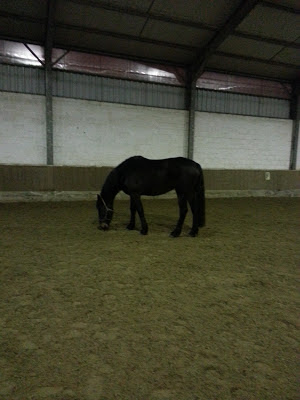 She had a bit of a nosy around the arena loose, and I had her trot around a little bit more but no fireworks. Not once did she look to go for a canter or throw a buck. Shall wait and see how she adapts once she's had a bit more time to settle and get used to her new surroundings. 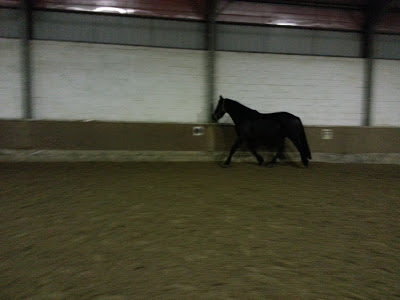 In all honesty Nancy was more interested in following me around as I filled in the wholes she attempted to dig yet she didn't seem that interested in rolling - am sure that will come once she feels more settled.