Title should probably be "So Far So Good" - but why not tempt faith every now and then, ;)

This week has been a very good week so far, work has been busy hence why I've been so quiet (well that and my discovery of the Divergent Trilogy - I read books 1 & 2 over two days...can't wait for Autumn now and the final installment), but I have gotten out to annoy both my girls most lunchtimes and every evening.

Monday Kika had her day off and spent the afternoon in the field with O, after the above photo was taken of Napping Beauty.
Nancy had her first experience of lunging in the pessoa on Monday evening, she took to it very well in what is now becoming her no-stress-stride. She is so cool compared to the other air-head - it's great to see the differences in their personalities and learn what works best for both of them...more balancing. :-D
When I think back to Kika's first experience of the pessoa and the fighting and bucking as she messed about trying to avoid what was being asked of her, Nancy just got on with it. She was a bit sticky on corners every now and then but there wasn't a peep out of her as regards bucking or refusing to cooperate. Warmed her up with some walk/trot transitions without the pessoa on, then only had the back-end so she could get used to that and then attached the front part for less then 5 minutes on each rein some walk & trot before detaching the front again and letting her stretch with just the back still on. She is so level-headed...long may it last! 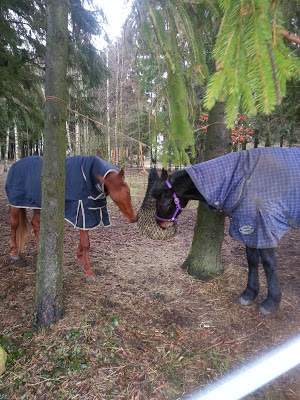 Nancy & O went out together for Tuesday afternoon, Nancy even got to wear her namesakes waterproof rug for the occasion. Nancy I was a livery horse at my aunt's yard from the age of 3 (when bought by my aunt & trained then sold to life-long owner) to 19 or 20 years of age. Sadly she passed away shortly before my Nancy was born, hence how she was named by my aunt's kids. It just so happens that when Nancy I passed away her rug fit Kika perfectly and as her owner wasn't going to buy another horse I was able to buy it off her and it moved to Lux with us in 2010! Funny how things come around full circle - sort of...

L had asked to ride Kika on Tuesday evening to follow up on what they worked on together with the dressage instructor at the weekend. So I got to ride Nancy stress free (meaning without watching the clock so that I could fit Kika in also), L went to the main arena with the main woman while N and I settled on the oldest arena where there was no one to distract us. Tacked her up and led her around so she could settle, hopped up and worked mostly on walk, trot, circles and changes of rein - as there was no one watching us I was better able to relax and remember that I am capable of riding and actually applied myself - I felt it went really well. I was very proud of the pair of us, we survived our first spin without lunging first since she came to Lux!

Wenesday L had the day off and asked if she could jump Kika during the day when the course was set up before the classes started - how can i refuse when it'll give L pleasure as her mare is coming back from injury and educate Kika...Win-win scenario in my book.  *nod*
She very kindly put Nancy out with O in the morning and then after riding Kika she swapped N for K in the field - so both girls got to spend time chilling in the field and their stables.

I had an appointment with my saddle fitter last night to see if we could find something adjustable to fit what will become tank-horse (Nancy). He had two types of saddle with him a leather dressage saddle which fit well and a synthetic Wintec dressage saddle which didn't fit at all - but he said he has a Wintec GP in the shop which he reckoned would fit and said he could bring it for us to try next week. While he was there I had him check how Kika's saddles are fitting her as I wasn't sure they were as glove-like as i wanted and I was right. The Dressage saddle isn't perfect but he said the changes required are so minimal that they wouldn't really make that much of a difference. He agreed with me that the GP needs a bit more work so that is being sent back to Stubben in Switzerland for alterations. I had him check both saddles on N to see if I could use them on her and wouldn't you know that the GP fit her much better than Kika - and the dressage saddle also fits. As N is going to change shape considerably in the coming months and won't finish growing for years to come I settle don sending the GP away to be fixed for Kika as she is finished growing and will use the dressage on both for now. In a few months time I'll have the saddle fitter come back and we can see if Nancy changes shape drastically as to what saddle to get her then - I will still be aiming for an adjustable one as I don't see her finishing filling out for a few more years yet!

I then rode Nancy in the dressage saddle for the first time last night, without any trouble for her. We did the same as the day before, whereby I led her around the arena at a walk until she settled - it has been very blustery the last two days here so lots of noises to frighten a young horse in a new environment. Just before I was about to hop up, L arrived bareback on her mare to keep us company and get N used to sharing the arena - as with everything we've thrown at her so far...not a bother to her! We walked, trotted, circled, changed rein and even did some canter in 2 point as she is still quite unbalanced so I don't sit into her yet but we did well including some nice large circles aswell as using the whole arena.
I had a much better feel then what I've had previously - we are both relaxing more, actually lets be honest I am relaxing more and getting used to her and her reactions. I have to de-program Kika's over-reactions from my brain and queue in a new database for Nancy - we're getting there! :D
She is a very level headed sort, even when L and O left the arena as we were cooling down, she got a little flustered and wanted to go join them but i kept talking to her and we kept walking around until she settled back down again before finishing up.
To say I was proud of the pair of us would be an understatement! I'm planning on giving her this evening off and she's spent the afternoon in the turnout area (see pic above taken on my lunch break). I hope to ride Kika for the first time since last Friday and can't wait! Here's hoping I don't undo all the work she and L did at the weekend! But I'm looking forward to sitting back on a horse where I know all the buttons are and what the reactions are likely to be.
Don't get me wrong I am loving getting to know Nancy and her quirks, she has them trust me! She has her own ideas and opinions however I am hoping to keep on top of them and remind her that I am in charge in a cool, calm and collected way - isn't that the dream?!
I have gotten so used to Kika after not having ridden anything else since we moved out here in 2010 - I am thoroughly enjoying getting to know Nancy and the learning curve we are embarking on - however it is still nice to return to the armchair that is the horse I know better...who'd have thought when i started this blog that we'd get to the day where I'd consider Kika an armchair ride?! She is far from perfect but I guess it's all about what you are used to!

Sorry going way off topic and undoubtedly waffling!
If you are still reading fair play! I hope the photos make up for all the nonsense waffle! I haven't forgotten about the promised stage videos, I just need to get a chance to get them uploaded/posted - have to admit to being pretty exhausted most evenings these days - but it was the same when Kika first arrived out here learning to balance her after work. I'll re-find an equilibrium in the coming weeks/months and very soon I'll be flying again energy-wise when i get used to the balancing act! :D
Posted by Aoife at 17:02