Sorry pics are a bit dark, but I didn't want to overwhelm her with a flash or annoy her too much. Her neighbours were being prattish enough to make her feel unwelcome without my harassing her also. Shall nab some more photos tomorrow evening when hopefully Kika plays nice once we introduce them!

I was in work from 8am to 12pm, Daddy dearest was a superstar and came to get me in the car so that I could get to the yard faster and be sure I was there for when she arrived. I had been told by the transporters that it would take 4 hours to get to Lux and they hoped to leave about 8.45am. I was literally just taking O out to the field when I saw the truck pull in, so I tied her up and grabbed a leadrope to greet my new girl off the truck. 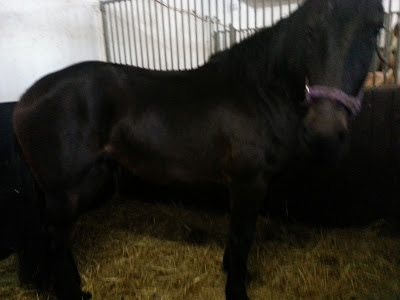 She was a teeny tiny bit tucked up getting off the lorry, but the transporter had warned me that she hadn't drunk much today. Apparently the horses didn't like the Calais water ;-)
Brought her into her stable where she met her neighbours (not Kika she's the other side of the haflinger in the background of the above picture), queue some squealing eyeballing. Poor Nancy was surrounded by hostility, she nibbled at the straw despite my having given her hay. So I split the hay into two piles, placing some along the back wall near the water dispenser where she was munching the straw and left the rest under the feed trough.
I then left her alone while I popped Kika on the walker, cleaned her stable and rode her for 25-30 minutes before the vet was due as if vaccinated Kika'd be out of work for 3 days. Again she was a star and we got some lovely walk, trot and canter work, I am so happy with her these days...long may it last! :D 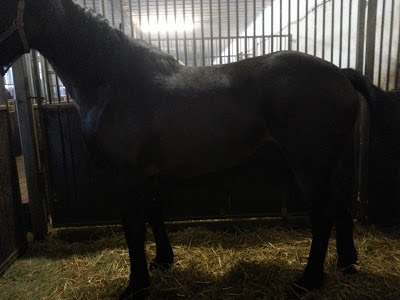 Left Kika tied in the grooming area with her cooler on while waiting for the vet. Gave Nancy some TLC and a bit of a grooming session where L found me and came for her first proper look at Miss Nancy. My dad also popped up while we were nosying & brushing her.
Vet arrived and it was all about Kika again as she got her vaccines, had her teeth done (little bit of sedation to avoid drama) and had some blood taken to test how her liver is doing as we approach the end of the latest course of supplements. Tied Kika in her stable for 30 minutes while the sedation wore off so that she wouldn't do herself a mischief. 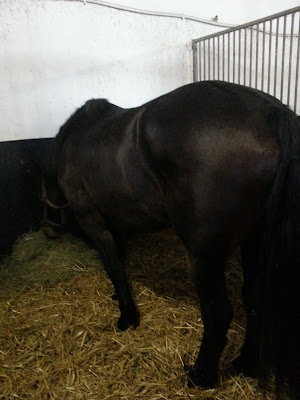 Vet had a quick look at Nancy and agreed with me that she had travelled well and although not exactly 100% comfortable she wasn't overly stressed or worried either. She was eating her hay, so I checked if it would be ok that I give her some Mash that L had kindly prepared for me. She said to give her a little bit first to see if she'd like it and to limit the amount of hard feed she gets until she is more comfortable. That had already been planned for and I'd asked YO to only give her a handful of pellets for the moment.
She wasn't too interested in the mash, so Kika got to lap that up as an easy post-teeth meal as I'd also asked YO to skip feeding her this evening.
However Nancy tucked into the pellets and had a good few drinks of water before settling back down to hay eating.

I took the headcollar off her and left her to settle for the evening. I don't know if the Mammy is going to want to go for a quick visit when she gets in from work, might be no harm to see how she's doing after a few hours on her own.

Shall check in again tomorrow!
Posted by Aoife at 19:55